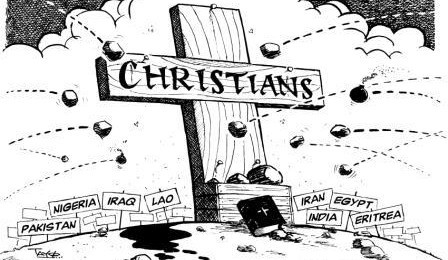 According to Open Doors, an organization whose mission is to strengthen and equip Christians to stand firm for Christ in the most oppressive countries around the world, “Nigeria had a total of 300 confirmed martyrs in 2011, Egypt at least 60 and Iraq 38. Open Doors defines a martyr as one who loses her or his life as a result of identification with Jesus Christ.”

Because of the often overly expansive or elastic use of words like “discrimination,” “oppression,” and “persecution,” Open Doors offers this helpful clarification of what constitutes persecution:

Though it is sometimes difficult to identify the difference between persecution and the everyday inconveniences of living in a world hostile towards Christianity, there are some clear defining factors.

Persecution occurs whenever a believer is denied the protection of religious freedom, prevented from converting to Christianity because of legal or social threats, physically attacked or killed because of their faith, forced to leave their job or home because of the threat of violence, or imprisoned and interrogated for refusing to deny their faith.

The International Bulletin of Missionary Research reports that “‘the number of [Christian] martyrs [in the period 2000-2010] was approximately 1 million.'”

In the 2002 Geneva Report, the World Evangelical Alliance estimated that “that there are more than 200 million Christians in the world today who do not have full human rights as defined by the UN Declaration of Human Rights, simply because they are Christians.”

In light of these tragic statistics, one might think that our government would be as concerned about the martyrdom of Christians as it is about “homophobia” around the world. Last week, when Secretary of State Hillary Clinton delivered her speech about exporting liberal American views on homosexuality, President Barack Obama sent out an equally troubling “Memorandum for the Heads of Executive Departments and Agencies” on the subject of “International Initiatives to Advance the Human Rights of Lesbian, Gay, Bisexual, and Transgender Persons.“

In this surprisingly detailed memo, Obama directs “all agencies engaged abroad” to “expand efforts to combat discrimination, homophobia, and intolerance on the basis of LGBT status or conduct.” To be crystal clear, he listed the agencies involved in this effort:

the Departments of State, the Treasury, Defense, Justice, Agriculture, Commerce, Health and Human Services, and Homeland Security, the United States Agency for International Development (USAID), the Millennium Challenge Corporation, the Export Import Bank, the United States Trade Representative, and such other agencies as the President may designate.

These governmental agencies are then directed to “engage” other international organizations to “bring global attention to LGBT issues.” And then every one of our agencies must “prepare a report within 180 days…and annually thereafter, on their progress,” which will be submitted to the State Department and then transmitted to the president.

We bear witness to those who are persecuted or attacked because of their faith. We condemn the attacks made in recent months against Christians in Iraq and Egypt, along with attacks against people of all backgrounds and beliefs. The United States stands with those who advocate for free religious expression and works to protect the rights of all people to follow their conscience, free from persecution and discrimination.

On Religious Freedom Day, let us reflect on the principle of religious freedom that has guided our Nation forward, and recommit to upholding this universal human right both at home and around the world.

In addressing the Obama Administration’s disparate treatment of Christians and homosexuals, I don’t seek to pit one group against another. Rather, I hope to illustrate that the current administration is concerned less about human rights violations and more about proselytizing and political strategics. Evidence suggests that the current administration cares less about fundamental rights–those that are articulated in our Constitution–and more about normalizing disordered sexual impulses via the specious use of civil rights arguments and about the deep pockets and political power of homosexual activists.

Take ACTION: Click HERE to send an email to President Obama to ask him to stop playing politics with Human Rights and encourage him to speak out about persecuted Christians around the world.

The moral assumptions of President Obama about the nature and morality of homosexuality are not only false but also offensive to many Americans as well as many people around the world. He has no right to use taxpayer resources to try to impose his controversial policies, unproven assumptions, and theologically unorthodox beliefs on the entire world.

Finally, Americans should urge our leaders to use the resources and influence of the United States to combat the persecution of Christians around the world.

From IFI’s beginning, we have been motivated by love for our neighbor. We care about marriage and strong families because people matter.

This is why Illinois Family Institute is…

a voice in the culture where the need is great for strong families;

in the halls of government where priorities for families need to be articulated;

in the education arena where true ideas and beliefs are either affirmed or undermined.

Would you like to join with us? Your financial support makes you part of this work to help change the conditions in Illinois for the better.

Let me encourage you to take a moment and make an online donation to Illinois Family Institute. A gift of any size will make a difference, particularly as we approach the year’s end.

You can be part of this positive change by partnering with us today!

What Is Becoming of America?
b
a
x
r