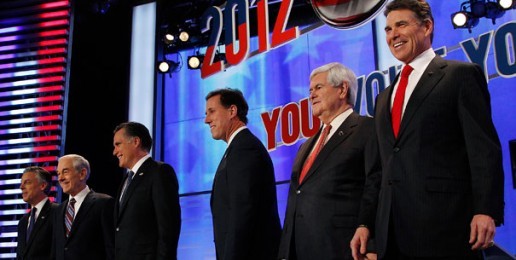 Six GOP presidential candidates are battling it out in the great “early voting states trifecta.” Voters launched the process in Iowa last week to select the Republican Party’s nominee to challenge President Barack Obama in November. The remaining weeks in January citizens in New Hampshire and South Carolina will make their voices heard. Former Massachusetts Gov. Mitt Romney seems to have a lock on the Granite State while the more conservative presidential hopefuls have better prospects in South Carolina.

A recent 7 News/Suffolk University tracking poll has Romney receiving 41 percent support, Texas Congressman Ron Paul was second in the poll with 18 percent and in third 8 percent of likely voters say they support former U.S. Senator Rick Santorum. Former Utah governor Jon Huntsman, who has made New Hampshire the focus of his bid for the GOP nomination, came in at nine percent.

But the world saw what a difference a caucus makes in Iowa. The social conservative, Santorum, who two months ago had one percent support among likely South Carolina Republican Primary voters, now is running a close second there with 24 percent of the vote. Former House Speaker Newt Gingrich sits in third with 16 percent of the vote. Bringing up the rear is Texas Governor Rick Perry with five percent and former Utah Governor Jon Huntsman at two percent, according to Rasmussen Reports. Another two percent of these likely primary voters like some other candidate, and 11 percent remain undecided.

Evangelical Christian voters prefer Santorum over Romney 33 percent to 17 percent.  But Romney leads among other Protestants, Catholics and voters of other faiths with roughly one-third of the votes from each group.

Vying for the Evangelical Vote

For weeks now Santorum, Perry, Gingrich, and in some regards Paul, have all vied for the important evangelical Christian vote.

Congressman Steve King (R-Iowa) says developing the right message and a good strategy is critical if a candidate hopes to receive the nomination.

“They’re saying Mitt Romney, who looks like he’s a shoo-in in New Hampshire, if he could have a good, strong showing in Iowa and go through New Hampshire and on down and win South Carolina, he’d be well on his way to the nomination,” King reports. “It’d be awfully hard to reverse it at that point.”

Even if a conservative candidate did not do well in Iowa, he suggests a good showing in South Carolina can sustain a campaign through the summer months.

“On the other hand, a candidate who may not finish first here in Iowa has an opportunity to go to South Carolina, and if they do well there, they can keep their fundraising going enough to get to [the January 31 primary in] Florida,” the congressman adds.

After leading in the pools, Gingrich did poorly in Iowa as a result of millions of dollars was spent in negative attack ads by pro-Romney PACS (political action committees).  Rick Tyler, senior adviser for Winning Our Future, a super PAC for Newt Gingrich, says fundraising has been robust of serious of ads hit the Internet pushing back.

“We intend to lay out the record of all the people in the race and let people make a decision as long as we don’t make a false witness,” said Tyler. “We will extol Newt’s record as a solid conservative who can beat Barack Obama.”