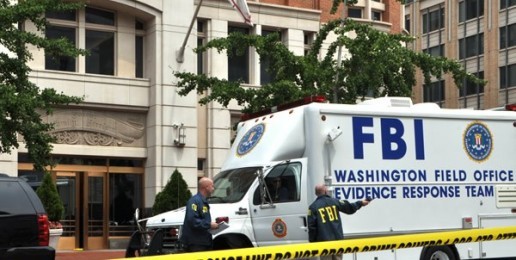 The magnitude of this Obama administration’s “progressive” radicalism becomes more evident with each passing day. In recent months, there has been a drastic spike in acts of both anti-Christian and anti-conservative discrimination and intimidation on military bases across the country. This mounting harassment is not being carried out at the hands of regular enlisted folk but, rather, at the hands of high-ranking officials who, in their official capacity, are targeting Christian and conservative organizations and individuals in an effort to silence them.

It has long been suspected that the Obama administration is using propaganda circulated by the roundly discredited Southern Poverty Law Center (SPLC), a left-wing extremist group that, in recent years, has adopted two primary goals: 1) raising truckloads of money and 2) smearing as “domestic hate groups” dozens of mainstream Christian ministries like the Family Research Council (FRC), the American Family Association (AFA), and local groups like Illinois Family Institute (IFI).

This suspicion has now been verified.

The problem on military bases has gotten so bad, in fact, that the U.S. Congress is demanding answers from the Pentagon. Recently, the AFA-affiliated OneNewsNow.com newsgroup reported that “Congressman Alan Nunnelee (R-Mississippi) is 1 of 38 members of Congress signing off on a letter to the Secretary of the Army – especially about an incident last month at Camp Shelby, Mississippi, in which the Tupelo-based American Family Association was labeled in Army training material as a ‘hate group.’ The Army initially claimed it was an isolated incident.

“‘But as we looked into it, [we found] this is not an isolated incident,’ Nunnelee [told] OneNewsNow. ‘There are a number of cases where the Army has singled out the American Family Association and other Christian organizations as hate groups, and service men and women have been threatened with sanctions if they support these groups.”

After a tremendous public outcry – and in an embarrassing slap to the face of the SPLC – the Pentagon quickly backpedaled, later apologizing about the Camp Shelby incident and publicly admitting that, despite the SPLC’s absurd claims to the contrary, the AFA is not a “hate group.”

Still, rather than distancing itself from the anti-Christian SPLC as one might expect, the Obama administration has, instead, strengthened ties to the hard-left outfit. Even after this string of military scandals.

For instance, I recently learned that on its official website, the FBI lists as one of its primary “hate crimes resources,” the Southern Poverty Law Center.

This is especially mysterious when you consider that the FBI’s own verified hate crimes statistics are completely at odds with numbers put out by the SPLC in its fundraising propaganda. Whereas the FBI indicates that there was a sharp 24.3 percent decrease in hate crimes from 1996 to 2010, with racial hate crimes dropping by 41.9 percent, the SPLC incongruously claims that since 2000, the number of “hate groups” has somehow increased by 67.3 percent.

So send your money right away!

The FBI’s empirical data doesn’t track with the SPLC’s political propaganda. Consequently, by partnering so closely with this discredited organization, the Department of Justice significantly undermines its own credibility.

Still, while the SPLC has proven utterly unreliable in its actuarial acumen – as well as intentionally dishonest – it has also proven demonstrably dangerous in its prolonged campaign of anti-Christian agitation.

You may recall that it was the Southern Poverty Law Center’s somewhat clever, yet patently dishonest and reprehensible strategy of juxtaposing, as fellow “hate groups,” mainstream Christian organizations like the FRC and the AFA alongside violent extremist groups like the Aryan Brotherhood and the Skin Heads that, on Aug. 15, 2012, led to an actual act of domestic terrorism.

On that date, “gay” activist Floyd Lee Corkins II – who later confessed in court that he was spurred-on by the SPLC’s anti-Christian materials – entered the lobby of the Washington-based Family Research Council intending to kill every Christian within.

Corkins was armed with both a gun and a backpack full of ammunition. He also had 15 Chick-fil-A sandwiches that he intended to rub in the faces of his would-be victims. (FRC had recently defended the food chain’s COO Dan Cathy for pro-natural marriage statements he made.)

The only thing standing between Corkins and mass murder was FRC facilities manager and security specialist Leo Johnson. As Corkins shouted disapproval for FRC’s “politics,” he shot Johnson who, despite a severely wounded arm, managed to tackle Corkins and disarm him.

Upon hearing of Leo’s selfless act of heroism, I was reminded of John 15:13: “Greater love has no one than this, that he lay down his life for his friends.”

But according to both the SPLC and the FBI (by virtue of its close ties to the group), Leo’s heart is, instead, full of hate. Everyone at FRC is hateful.

In fact, if you happen to be a Bible-believing Christian, you too are hateful.

You get the drill.

The Obama administration has absolutely no business partnering with this extremist organization – and it’s an outrage that it does. If this troubles you as much as it does me, please contact the FBI at (202) 324-3000 and respectfully voice your concern. Then call or email your local FBI office. (Click here to find that location.) It’s critical that freedom-loving Americans light-up the FBI’s phone lines and demand that all facets of government completely disassociate from the SPLC and disavow any further use of its anti-Christian propaganda.

The Southern Poverty Law Center must be held accountable for its inflammatory and potentially deadly anti-Christian bigotry.