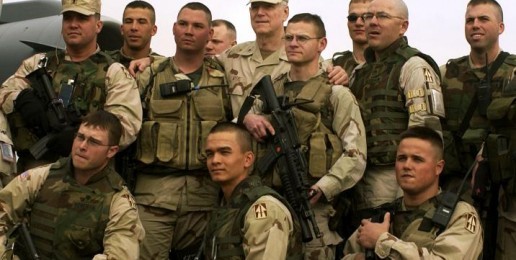 Soldiers in the US Military are taught from day one to take orders and follow them without discussion. So, it should be no surprise that the implementation of open homosexuality in the armed forces on September 20, 2011 has occurred fairly quietly (though President George Washington, must be screaming from his grave, given what he said and did in regard to this issue as Commander of the Continental Army.)

Even so, an article in the Washington Times indicates there may be problems ahead. Both supporters and critics of the new policy were interviewed in the article, which found that the change had some mixed results. The Washington Times mention of a Military Times survey however, was the most noteworthy takeaway.

That survey looked at active-duty respondents who indicated that following the repeal of the ban on homosexuality in the military someone in their unit “came out” as homosexual. The survey found that such an occurrence, (which is being encouraged by homosexual demands groups,) has occurred around 31 percent of the survey’s respondents. Of those, 84 percent of active-duty personnel reported increased tension or some sort of problem surrounding the public revelation by a homosexual soldier in their unit.

It will be interesting to see how this historic change in policy plays out and what problems and next steps arise from it, or if those problems are hidden due to the politically correct nature of the policy. (I am still wondering what rationale the military now has for separating men and women’s barracks, if men attracted to other men can sleep and shower in the same facilities without any expectation of a problem.)