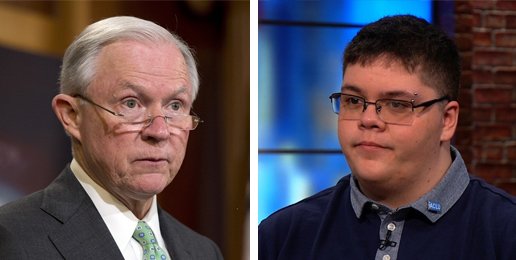 Some readers may be blissfully unaware of DOJ Pride, the “Association of Lesbian, Gay, Bisexual, and Transgender Employees of the U.S. Department of Justice and Their Allies.” According to its website, “DOJ Pride is the recognized organization for all Lesbian, Gay, Lesbian, Bisexual and Transgend employees and allies in all DOJ Offices, Boards, and Divisions; the ATF, BOP, DEA, FBI, USMS, OJP, and USAO; and contractors in any of these components.”

In celebration of “pride” month, DOJ Pride is hosting its annual event on June 28, 2017 in the “in the Great Hall of the department’s main building on Pennsylvania Avenue, in between the Capitol and the White House.”

At this event, DOJ Pride will award its Gerald B. Roemer Community Service Award to “Gavin” Grimm, the girl who masquerades as a boy and who filed a federal civil rights lawsuit against her Virginia high school for prohibiting her from using the boys’ restrooms.

Her case made it to the U.S. Supreme Court and would have been heard this month had Attorney General Jeff Sessions not rescinded Obama’s edict to public schools, which threatened loss of federal funds to schools that prohibited co-ed restrooms and locker rooms.

Unfortunately, Sessions really mucked things up a couple of days ago. When asked about the upcoming DOJ Pride event, Sessions said this:

We are going to have a pride group, in this very room… so that’s perfectly appropriate, and we will protect and defend and celebrate that — and protect the rights of all transgender persons…. [W]e are not going to allow persons in this country to be discriminated against or attacked in any way for their sexual orientation—”

Homosexuals and people who reject their sex are no more or less deserving of celebration than any other person, but the reasons to celebrate them do not include their homoerotic desires, their sex-rejection, or their efforts to sexually integrate restrooms, locker rooms, showers, and shelters.

Session’s statement is the kind of ambiguous statement born of foolishness, cowardice, and political correctness run amok that sows confusion and helps advance the social, political, and moral agenda of Leftists. Many conservative Americans expect more of Sessions.