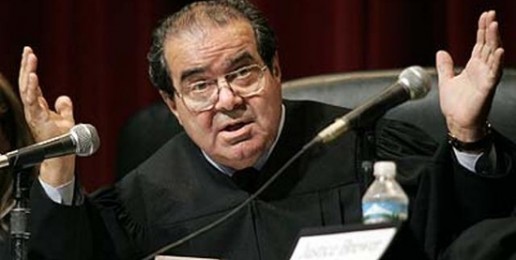 Today in a 5-4 decision, the U.S. Supreme Court held that Section 3 of the Defense of Marriage Act (DOMA), which defines marriage for federal purposes as the union of one man and one woman, is unconstitutional. This decision compels the federal government (i.e. taxpayers) to provide  federal benefits to homosexual couples who have “married” in states that have jettisoned sexual complementarity from the legal definition of marriage. This decision does not require states to legalize same-sex “marriage.”

In a scathing dissent, Justice Antonin Scalia excoriated the presumptuousness (and incomprehensibility) of the majority opinion:

This case is about power in several respects. It is about the power of our people to govern themselves, and the power of this Court to pronounce the law. Today’s opinion aggrandizes the latter, with the predictable consequence of diminishing the former. We have no power to decide this case. And even if we did, we have no power under the Constitution to invalidate this democratically adopted legislation. The Court’s errors on both points spring forth from the same diseased root: an exalted conception of the role of this institution in America.

[S]etting aside traditional moral disapproval of same-sex marriage (or indeed same-sex sex),there are many perfectly valid—indeed, downright boring—justifying rationales for this legislation. Their existence ought to be the end of this case. For they give the lie to the Court’s conclusion that only those with hateful hearts could have voted “aye” on this Act. And more importantly, they serve to make the contents of the legis­lators’ hearts quite irrelevant….By holding to the contrary, the majority has declared open season on any law that (in the opinion of the law’s opponents and any panel of like-minded federal judges) can be characterized as mean-spirited.

The majority concludes that the only motive for this Act was the “bare…desire to harm a politically unpopular group.”…Bear in mind that the object of this condemnation is not the legislature of some once-Confederate Southern state…but our respected coordinate branches, the Con­gress and Presidency of the United States. Laying such a charge against them should require the most extraordi­nary evidence, and I would have thought that every attempt would be made to indulge a more anodyne expla­nation for the statute. The majority does the opposite—affirmatively concealing from the reader the arguments that exist in justification. It makes only a passing mention of the “arguments put forward” by the Act’s defenders, and does not even trouble to paraphrase or describe them….I imagine that this is because it is harder to maintain the illusion of the Act’s supporters as unhinged members of a wild-eyed lynch mob when one first describes their views as they see them.

The unconstitutionality of Sec. 3 of DOMA must come as a surprise to the 342 representatives (including 118 Democrats) and 85 Senators (including 32 Democrats) who voted for it in 1996. And it must really come as a surprise to Rhodes Scholar, attorney, and former president, Bill Clinton, who signed it into law. IFI understands that people’s positions on an issue can “evolve.” What is baffling is that scores of attorneys could be so mistaken on the constitutionality of this law. In fact scores of Democratic attorneys didn’t notice the unconstitutionality of DOMA, including Senators Joe Biden, Dick Durbin, Harry Reid, Max Baucus, Chris Dodd, Russ Feingold, Patrick Leahy, Carl Levin, and John Dingell, and Representatives Bob Menendez and Chuck Schumer, all attorneys who voted for DOMA.

Even though this decision reflects only a limited constitutional question, it will likely fuel the intellectually and morally vacuous state efforts to legalize so-called same-sex “marriage”—an oxymoron, if ever there was one. Intellectually lazy lawmakers who have no idea what marriage is or why the government is involved in the marriage business will use it for political cover.

The U.S. Supreme Court also decided with uncharacteristic voting alliances that the Proposition 8 case had no standing and to vacate the Ninth Circuit Court of Appeals Prop 8 decision.

Prop 8 was the ballot initiative in California that established marriage as the union of one man and one woman. After the people of California through Prop 8, in effect, overturned the same-sex marriage law, a lawsuit followed challenging Prop 8. A closeted homosexual activist judge, Vaughn Walker, voted against Prop 8 in a widely ridiculed decision (in which he potentially had a personal stake), after which he popped out of the closet and retired.

Today’s Prop 8 decision, though having the destructive result of allowing same-sex “marriages” to resume in California, did not decide on the merits of Prop 8 or Judge Walker’s infamous judicial reasoning. It merely decided on the jurisdictional issue of who has legal standing to defend Prop 8.

Today’s decisions will not contribute to a strengthening of marriage or an advance for equality or movement toward smaller government or a victory for justice or increased protection for children. Quite the opposite.

And while the red cape of this decision is fluttered in front of the charging marriage-destruction bull, Americans will continue to avert their gaze from the essential questions of whether homosexuality is really analogous to race; whether same-sex marriage is really analogous to interracial marriage; why marriage should be limited to two people; why the government is involved in marriage; and whether children have an inherent right to be raised by a mother and father, particularly their own their biological mother and father.

Marriage has a nature that the government merely recognizes and regulates. The state does not create something called “marriage” out of whole cloth. And the reason the state is involved in marriage is to protect the needs and rights of any children that may result from the particular type of sexual union that is marriage.

If marriage is solely constituted by intense loving feelings with no connection to sexual complementarity or procreative potential, there is no reason to prohibit government recognition of plural unions as marriages and, indeed, no reason for government involvement at all.

These are two more sustenance tubes yanked from the dying body that is marriage in America. It’s truly a sad day for America, and most especially America’s children.