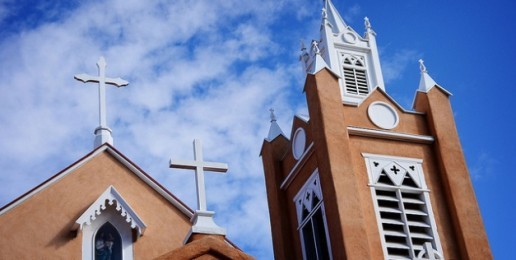 We need to pay closer attention to what is being taught and not taught in many historically orthodox (small ‘o’) churches. To get a clearer picture of the fuzzy theology that many are embracing—and often concealing from their members, here are some excerpts from (and my thoughts about) a troubling letter a pastor of one such church sent to a church member who had sent him an IFI article on the need for pastors to teach clearly on the topic of homosexuality:

I do seek to preach, teach, and embody the whole counsel of God—though I …don’t feel as though I’ll honestly have that fullness. I think that we know God and we don’t, we get the gospel and we don’t, and that we often and usually as the church get ourselves into trouble when we feel that we fully possess and understand the teachings of Jesus completely.

Of course, it’s true that we see through a glass darkly now and as fallen creatures cannot fully (to borrow his words) “get the gospel.” There are numerous parts of Scripture that are difficult to understand and ideas, like the Trinity and Incarnation, which are conceptually impossible to grasp.

Dr. Robert A. Gagnon has written arguably the best book on this issue titled The Bible and Homosexual Practice: Texts and Hermeneutics. This pastor’s church would be well-served by inviting Dr. Gagnon to teach on the subject.

The pastor goes on:

There are a few verses of Scripture which speak about homosexuality, in the Hebrew Scripture and also in the Epistles of Paul. At the same time, in the gospels, we have a clear image of Jesus, who loves sinners, and who seeks out those that are unwelcome, unwanted, and deemed unclean by the religious community—tax collectors, prostitutes, “other sinners,” lepers, women, children, etc.—and he loves them, eats with them, stays in their homes, and loves them. My own struggle is caught up in this call of Jesus to love and serve the last, the least, and the lost.

There’s a lot packed into those sentences.

First, in a biblical worldview, there is a difference between tax collectors, prostitutes, and “other sinners” and women, children, and lepers. Although they shared in common the experience of social rejection, one group is defined by sin that Jesus and Paul exposed and confronted.

Second, he uses the transitional phrase “at the same time” as if the verses that unequivocally condemn homosexual acts contrast with or oppose the ideas of seeking out, eating with, serving, and loving sinners. Jesus did and we should do both. In fact, teaching the whole counsel of God and exposing deeds of darkness are loving acts. It is only the unsaved world with little capacity to see truth that believes that in order to love others, we must affirm all of their feelings, beliefs, and life choices. There is no Scriptural evidence that Jesus spent time with sinners without soon calling them to repentance.

Jesus did not confront only the religious community, as this pastor’s statement implies. Jesus confronted sin in whomever he found it. He confronted the established “conservative” religious community for its deviation from truth and righteousness, and he confronted individual sinners for their deviations from truth and righteousness. He told the rich young ruler to give up his possessions. He told the woman caught in adultery to go and sin no more. And Zacchaeus repented of his sins before his feet hit the ground. There is no scriptural evidence that Jesus sat around just chewing the fat and being “relational” with sinners for extended periods of time, all the while appearing to or actually affirming their sin as so many churches do today in regard to homosexuality.

Through Paul, God unequivocally lays out his vision for the church on sexual matters. Paul chastised the church in Corinth for its embrace of sexual immorality. With regard to believers in the church, Paul wrote in 1 Corinthians 5:11, “But now I am writing to you not to associate with anyone who bears the name of brother if he is guilty of sexual immorality or greed, or is an idolater, reviler, drunkard, or swindler—not even to eat with such a one.” And doing this is an act of love—not hatred. Knowing that those who not only engage in the sin of homosexuality but also embrace and affirm homosexuality will not see the Kingdom, Paul sought to restore them to a proper relationship with Christ and within the body.

As justification for the church’s increasing silence on homosexuality, this pastor correctly pointed out that sins of all kinds are present in the church, some of which, like greed, are far more prevalent than homosexuality. I have yet to hear, however, of a church that affirms greed as good. What this pastor failed to acknowledge is the huge difference between experiencing and succumbing to sinful impulses and proclaiming sin to be righteousness, which is the problem in churches today with regard to the serious sin of homosexuality.

Perhaps the pastor’s most troubling statement was this:

I am pastor to folks who read and study Scripture, who love God and live by faith in Jesus, and who feel differently about the issue of homosexuality in regards the church and also in our culture, politically, as is being discussed these days. My first concern is that we remain unified in Christ, who calls us all to the feast of Holy Communion, Christ who calls us together into ministry. My second concern is that regardless of where we stand individually on this issue (or any other), we must stand firmly committed to love, and to the welcome of all people who are sinful and broken to join us at the table.

It is passing strange to hear a pastor argue that his teaching is shaped by the political views of his flock, particularly views that contravene clear biblical teaching. How his flock “feels” about homosexuality should be wholly irrelevant to what he teaches. Church unity must never trump Scripture, and the presence of diverse views on how to interpret Scripture does not mean that all views are equally sound.

Would this pastor make these same statements if some of his members were affirming bestiality, adult consensual incest, or polyamory as moral and biblically justifiable? If not, why not? Is there any sin the affirmation of which would be sufficient for him to say doctrine trumps unity? Pragmatically, what would he do if two men in a homosexual civil union who claimed to be believers started attending his church and sought to become members? What would he do if, in the presence of children, they could be seen holding hands?

True love does not accommodate sin. All of us are sinful and broken, but coming to Christ and partaking of Holy Communion necessarily involves repentance. And facilitating repentance are pastors who preach truth.

All Christians should ask their pastors and priests what they believe about homosexuality. If their answers are wrong, evasive, or equivocal, Christians should find other churches, churches where God is glorified and his word honored.

I charge you in the presence of God and of Christ Jesus, who is to judge the living and the dead, and by his appearing and his kingdom: preach the word; be ready in season and out of season; reprove, rebuke, and exhort, with complete patience and teaching. For the time is coming when people will not endure sound teaching, but having itching ears they will accumulate for themselves teachers to suit their own passions, and will turn away from listening to the truth and wander off into myths. As for you, always be sober-minded, endure suffering, do the work of an evangelist, fulfill your ministry. (2 Tim. 4: 1-5)