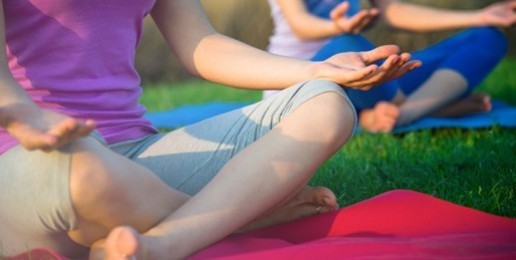 Can yoga be completely stripped of Hinduism and even “Christianized”? Many Christians believe it can. In fact, some churches and Christian colleges, like Wheaton College and Gordon College, even offer yoga classes. Christian yoga proponents admit that yoga originated as a form of Hindu worship. But, as an article posted to the Wheaton College website says, yoga today is often just an “ancient system of postures and breathing” that’s “largely void of religious overtones.” Similarly, an article in Relevant Magazine argues that though “Hinduism involves yoga; all yoga is not Hinduism.” In fact, the article suggests, yoga can be Christian. It’s one of those things like Christmas and Easter, which once was pagan, but now has been co-opted for Christian worship.

But, is Westernized yoga truly nonreligious? Neither of my guests on this past Saturday’s Up for Debate argued it was. Laurette Willis, the founder of PraiseMoves, said yoga served as a gateway into New Age religion for her and her mom. Her testimony is extremely compelling and worth the four minutes it takes to hear it:  Click HERE to listen online.

However, Bonnie then described that when experiencing “very beautiful” Hindu worship before statues at an ashram in Colorado, she had an epiphany: “Why can’t we do this for Jesus? I could feel him just like deep-down inside of me. And then, after that, that’s when I started questioning my teaching (to keep Christianity out of yoga). And, I’m like I want to bring Jesus into my (yoga) practice.” Bonnie describes her experience in this two-minute clip:  Click HERE to listen online.

Again, neither Bonnie nor Laurette argued that yoga was nonreligious. Clearly, to them, the positions, the breathing and the philosophy that imbues yoga is deeply religious. The only question was, can yoga be made Christian instead of Hindu?

When I first heard Bonnie describe her story, it made me unsettled. Again, she got the idea to combine Christianity and yoga while sitting in a Hindu worship service. Was it really, then, just the postures and breathing of yoga she wanted to combine with Christ – or yoga’s inherent spirituality, which is Hindu? Can the Hindu spirituality and exercises even be separated?

Many today believe it can – or at least, that yoga’s Hindu spirituality can be replaced with Christian spirituality. In fact, so-called “Holy Yoga” is now practiced in dozens of churches nationwide and is broadcast around the world on HYTV (Holy Yoga TV). But, it seems to me that so-called “Holy” or Christian yoga would more accurately described as syncretism. This is an attempt to combine two or more contradictory beliefs into a new religious system.

For example, Bonnie said she uses two Sanskrit words in her classes – “Namaste” and “yoga.” Sanskrit is the liturgical language of Hinduism. And, the word “Namaste” means “the god in me honors the god in you.” In the short clip below, Bonnie explains more about how and why she uses these words:  Click HERE to listen online.

Hinduism is pantheistic and teaches that god is in everything — its 330 million gods, plants, animals, and every human being. So, to salute the divine in another person makes total sense to a Hindu.

Christianity, however, teaches that God is transcendent and distinct from His creation. Though it’s true that the Holy Spirit resides in each believer, the Holy Spirit does not bow to himself in other believers saying, as Bonnie does, “That light in me honors that light in you.” According to Scripture, the Holy Spirit honors the Father and the Son. And a Christian’s worship, though emerging from within him, should always be directed upward and outward. So, the Psalmist says, “Awake, my soul! . . . I will praise you, Lord, among the nations.” In Christianity, we, the creature, direct our worship to the Creator.

Similarly, the word yoga is problematic. Yoga means “to yoke.” And, as Laurette noted on the program, using the word begs the question, “Yoked to whom?” As Laurette explains, the postures and techniques of yoga were designed to be offerings to the millions of Hindu gods. But ultimately, yoga was intended to yoke a person to the so-called “Lord of Yoga” – Sheva, the destroyer. In the brief audio below, she describes why she believes these realities make yoga, regardless of how it’s packaged, incompatible with Christianity:  Click HERE to listen online.

Yoga is a modern golden calf

As I’ve reflected on Saturday’s show, I can’t help but think of the Israelites worshipping the golden calf after the exodus from Egypt. I used to think the Israelites understood the calf as representing a deity other than Yahweh. However, as some scholars note, they likely viewed the calf as a representation of Yahweh. They simply were trying to appropriate the idol worship they had learned in Egypt for worship of the one, true God, whom they barely knew.

This seems much like what Christians are doing today with yoga. We are not worshipping God in spirit and truth. Instead, we’re trying to worship Him through an idolatrous practice that emerged from a lie about His nature. But, just like God called the Israelites to be separate from the idolatry surrounding them, He calls us to do the same today.

So, I would encourage Christians to stay away from yoga. Given its thoroughly Hindu foundation, I don’t think it can ever be fully stripped of all its religious meaning and become mere exercise. And, it certainly is not a valid means of Christian worship. As one Christian author wrote, “Saying that we can Christianize yoga is, in a sense, saying that we can Christianize Hinduism.” Yes, we Christians may have co-opted days like Christmas and Easter for Christian celebrations. But, we don’t incorporate pagan practices into our actual worship. Truth is, yoga is not holy and it certainly is not Christian.

This article was originally posted at the JulieRoys.com website.

Listen to Julie Roys on Moody Radio Network as she hosts the Up for Debate radio program, an hour-long, live talk show in which she explores debatable issues in the church with two Christian leaders with different perspectives.  Up For Debate airs every Saturday at 11 a.m. Central Time/noon Eastern on more than 145 stations nationwide — including Chicago’s WMBI at 90.1 FM.”  Click to visit the Up For Debate website.