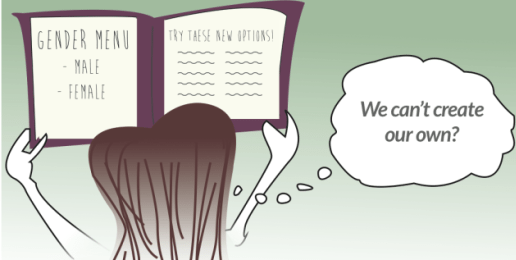 Every time the incoherence or fallaciousness of their arguments is exposed, they frantically invent a new theory and a new term to advance their irrational agenda. Just keep dangling dazzling neologisms in front of the public’s blurry eyes and they won’t notice the idiocy and perversion that is destroying the lives of children while serving the desires of adults.

In a more rational, less cowardly culture, we would just say that “gender identity” denotes the disordered desire to be the opposite sex. We would call it gender confusion or Gender Identity Disorder or Gender Dysphoria. Oh, wait, we tried that, but it didn’t serve the desires and social and political goals of the gender confused among us.

Now stay with me.

When Leftists argue that minors should be able to access medical help in rejecting their physical embodiment, they won’t state it exactly like that, because that would expose their hypocrisy and incoherence. Instead, they employ their novel terms to explain their queer ideology. They will say trans-minors are not seeking to change anything. They’re seeking to “align” their bodies with their inherent, immutable “gender identity,” which is either a trans-man (that is, an actual woman) or trans-woman (that is, an actual man). And when trans-people have healthy body parts amputated, they’re no longer having either “sex change surgery” or  “sex reassignment surgery.” They’re now having “gender confirmation surgery.” This new term diverts the public’s attention from the truth that no one can change his or her sex. And it serves to reinforce the belief that subjective feelings are the ultimate arbiter of reality. In the Gnostic world of trans-activism, healthy, objective, material bodies must submit.

I proclaim that there exists a “sexual orientation identity” that is inherent and authentic. Sometimes our “sexual orientation identity” aligns with our actual sexual desires, and sometimes it doesn’t.
When identity and desire align, we are cis-hetero or cis-homo. When they don’t align, we are trans-hetero (i.e., we actually experience same-sex attraction but identify as hetero).
Surely, if trans-men (i.e., actual women) and trans-women (i.e., actual men) are permitted to access medical help in aligning their bodies with their authentic “gender identities,” then trans-heteros and trans-homos should be able to access medical help in bringing their existing subjective desires into alignment with their authentic “sexual orientation identities.” If bodies can be re-aligned, surely in some cases feelings can be re-aligned.

Oh, and just to forewarn you, there are two other novel terms embodying queer ideas peeking over the rainbow-hued horizon: GSM and GSRM. GSM means Gender and Sexual Minorities, and GSRM means Gender, Sexual and Romantic Minorities. The Left needed to invent these because they were being mocked for the silliness of LGBTQIAAP.  You gotta give it to the Left. They are a rhetorically nimble and imaginative bunch.

Right now, liberals in Springfield do not have the votes to pass HB 217–the anti-autonomy, anti-choice Reparative Therapy Prohibition Act–even though they control both houses of the legislature. The lack of support for this bill is something liberals and their water-carriers in the mainstream press don’t share with the public.

But “LGBTQIAAP” activists are working like trans-madmen to garner support for this bill. Illinoisans need to match and exceed their fervor and tenacity in order to retain the right of minors to access medical help in aligning their unchosen, unwanted sexual desires with their inherent, immutable “sexual orientation identities” or in constructing identities that do not affirm unchosen, unwanted same-sex attraction.

TAKE ACTION: CLICK HERE to contact your state representative and state senator urge them to protect the rights of minors to seek help for their unwanted attractions. Urge a “No” vote on HB 217 and SB 111.

Join Us on May 7th

“Islam in America: A Christian Perspective”
with Dr. Erwin Lutzer