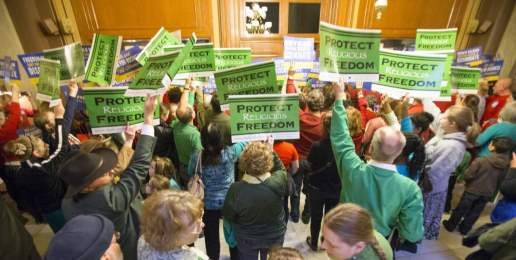 Intellectual frustration is boiling over—mine, that is.

Opponents of RFRA laws would like these laws to protect religious liberty as long as religious liberty protections never trump the wishes of those who affirm a homosexual identity. Homosexual activists seek to effectively neuter the First Amendment. They seek to enshrine in law the right to discriminate based on religion and then have the audacity to say—as Apple CEO Tim Cook has—that RFRA laws “go against the very principles our nation was founded on.” Say what? Last time I checked, this nation was founded on religious liberty—not homoerotic privilege.

“Progressives” fret with feigned hysteria that Indiana’s Religious Freedom Restoration Act is really about homosexuality, which points to the unsavory truth that the only current threat to religious liberty in America is posed by the social and political movement to normalize homoeroticism. If the jackboot fits, homosexual activists should just wear it.

Here are my responses to two of the fatuous arguments that the Left produces in their effort to amend the Constitution without having to go through the work of amending the Constitution. Getting rid of that pesky First Amendment Free Exercise Clause would be oh so tedious and intellectually challenging. It’s much easier to hurl epithets, concoct absurd analogies, and redefine terms trusting that few will bother to think carefully about the glittering new redefinitions.

Bad argument 1. This law is designed to discriminate against “gays.”

Barronelle Stutzman, the elderly florist in Washington state who is being sued because she wouldn’t make floral arrangements for a same-sex “wedding,” had served the homosexual man who requested flowers for his faux-wedding. In fact, she was friends with him and had sold him flowers on multiple occasions knowing that he was homosexual.

Refusing to sell pastries or tulips to a customer who happens to be homosexual or bisexual (or black or white or a man or a woman) would constitute an immoral, unbiblical, indefensible act. Refusing to create and provide a cake or floral arrangement for an event that celebrates a union that your faith teaches is abhorrent to the God you serve is a biblically warranted, morally defensible act.

The Left claims that since both homosexual couples and heterosexual couples are requesting the same product, the discrimination present in the refusal to provide goods or services for a homosexual “wedding” constitutes discrimination based on their “sexual orientation.” But such a claim requires assent to the embedded, unspoken proposition that a homosexual “marriage” is, in reality, identical to a sexually complementary marriage. Orthodox (small “o”) Christians reject that claim as false.

What “progressives” are really claiming is that outside their homes and pews, orthodox Christians may enjoy religious liberty, but they, “progressives,” get to define all the terms of the debate. If they, “progressives,” claim that there are no ontological differences between non-marital, same-sex “weddings” and marital, sexually complementary weddings, then abracadabra, there are no ontological differences. In the faith-based, presuppositional, totalitarian universe of “progressives,” refusal to provide goods or services for the celebration of non-marital, same-sex “weddings” is not discrimination between two different types of events (because the Left has ordained them identical), but, rather, discrimination against persons. Very tricksy rhetorical game.

Bad argument 2. (ad nauseum) This RFRA law is the equivalent of Jim Crow laws that permitted restaurants to refuse to serve blacks.

For the umpteenth time, homosexuality is not analogous to race. Race is 100 percent heritable and immutable in all cases. Most important, race is not constituted by subjective desire or volitional acts.

In contrast, homosexuality is not 100 percent heritable, is in some cases mutable, but most important, homosexuality is constituted centrally by subjective desire and volitional activity, which is perfectly legitimate to assess morally. Much better analogues for homosexuality are polyamory or consensual adult incest.

Therefore, if homosexuality is included as a protected category in anti-discrimination policy and law, shouldn’t other conditions constituted by subjective desire and volitional acts be included in anti-discrimination law? Shouldn’t polyamory and consensual adult incest (or paraphilias which too are constituted by powerful unchosen and seemingly intractable desire and volitional acts) be considered, alongside race, as constitutionally protected categories? Shouldn’t business owners be compelled to use their gifts to help them celebrate their polyamorous and incestuous commitment ceremonies?

And what about bisexuality, which has been deemed a “sexual orientation”? Should Christian bakers, florists, and photographers be compelled to create and provide goods or services for a commitment ceremony between two women and a man who identify as bisexual?

As a fix, some conservatives are recommending that Indiana pass a law that prohibits discrimination based on “sexual orientation.” Such laws are misguided for three reasons:

Not including “sexual orientation” in anti-discrimination laws no more constitutes legal carte blanche to refuse service to homosexuals or bisexuals than does the absence of the categories of paraphilias, polyamory, gluttony, or adultery constitute legal carte blanche to refuse to serve frotteurists, zoophiles, polyamorists, gluttons, or adulterers.

As a Christian, I shouldn’t refuse to serve whites, but I should refuse to provide cakes for a celebration of white superiority.

I shouldn’t refuse to sell tulips to a woman who affirms a bisexual identity, but  I should refuse to create and provide floral arrangements for her commitment ceremony to a man and woman.

I shouldn’t refuse to serve Muslims, but I should refuse to photograph a pro-ISIS rally.

I shouldn’t refuse to sell a pastry to a homosexual, but I should refuse to bake a cake for his anti-wedding.

By the way, remember this news story next time someone asks, “How will same-sex marriage hurt you?”