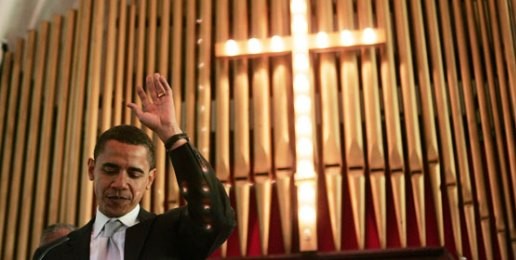 Constitutional revisionists within our mainstream press claim that First Amendment religious protections extend only to churches and homes. So, why is it that they become silent as church mice when President Barack Obama publicly appeals to his Christian faith in defending his political positions?

Obama, who claims to be a Christian (and whom many in the press proclaim with dogmatic certainty he is), cites the Golden Rule and the Sermon on the Mount to justify his “evolution” on marriage.

Obama now embraces and promotes a definition of marriage that contradicts explicit Old Testament moral laws that, unlike ceremonial laws, still pertain. And he conveniently ignores more salient New Testament passages related to both homosexuality and marriage that would have be wildly distasteful to his party base. But nonetheless, according to Obama, it is his religious beliefs that shape his political support for the legal recognition of homoerotic unions as marriages. Usually, when liberals in the press are within earshot of a conservative politician citing Scripture, they become a cacophonous pack of baying hounds. In contrast, when Obama cites Scripture, they become stridulating crickets.

While Obama cherry-picks Scripture, plucking verses way out of context to defend his “evolution” on marriage, nary a liberal pundit screams “VIOLATION OF CHURCH AND STATE” as they do when conservatives mention Scripture to defend their political views. That I know of, neither Chris Matthews, nor Eric Zorn, nor Frank Bruni has accused Obama of imposing his religious beliefs on all of America or of violating the separation of church and state when Obama dared to walk his faith out of his pew, home, and heart and into the glaring light of the public square.

While transitioning to his now more fully evolved position (watch for more evolution to come), Obama said this in defense of civil unions:

I believe in civil unions….If people find that controversial, then I would just refer them to the Sermon on the Mount, which I think is, in my mind, for my faith, more central than an obscure passage in Romans. [emphasis added]

Obama’s mind notwithstanding, all Scripture is God-breathed, so Paul speaks only truth. And Romans 1 is not in the least obscure. Romans 1 is clear, unequivocal, and consistent with passages in Genesis, Leviticus, 1 Timothy, and 1 Corinthians regarding God’s view of homosexuality.

When Obama’s transition to an even more advanced evolutionary but less biblically-consonant position was complete, he added this strained hermeneutical defense:

[Michelle and I] are both practicing Christians and obviously this position may be considered to put us at odds with the views of others but, you know, when we think about our faith, the thing at root that we think about is, not only Christ sacrificing himself on our behalf, but it’s also the Golden Rule, you know, treat others the way you would want to be treated. And I think that’s what we try to impart to our kids and that’s what motivates me as president and I figure the most consistent I can be in being true to those precepts, the better I’ll be as a as a dad and a husband and, hopefully, the better I’ll be as president.

In addition to dismissing passages in the Old Testament and the words of Paul in Romans, 1 Timothy, and 1 Corinthians, Obama ignores Jesus’ own words regarding the true nature of marriage:

Have you not read that he who created them from the beginning made them male and female, and said, ‘Therefore a man shall leave his father and his mother and hold fast to his wife, and the two shall become one flesh’? So they are no longer two but one flesh. What therefore God has joined together, let not man separate.

Bearing in mind Obama’s odd use of Scripture, read these illuminating excerpts from Obama’s speech at the recent  National Prayer Breakfast:

There is a tendency in us, a sinful tendency that can pervert and distort our faith.

… I believe that the starting point of faith is some doubt — not being so full of yourself and so confident that you are right…that somehow we alone are in possession of the truth.

Our job is not to ask that God respond to our notion of truth — our job is to be true to Him, His word, and His commandments.  And we should assume humbly that we’re confused and don’t always know what we’re doing….

And so, as people of faith, we are summoned to push back against those who try to distort our religion…for their own nihilistic ends.  And here at home and around the world, we will constantly reaffirm that fundamental freedom — freedom of religion — the right to practice our faith how we choose….and to do so free of persecution and fear and discrimination.

Obama’s sinful perversion of and misuse of Scripture to defend non-marriage as marriage and the eager willingness of “progressives” to undermine religious liberty in deference to sexual libertinism render these words all the more compelling—and ironic.

Progressive pundits ought to admit their double standard when it comes to appeals to Scripture: Politicians can appeal to Scripture so long as their religious appeals never lead to policies that liberals don’t like.

And Obama ought to admit that he doesn’t study Scripture to inform his leadership. Rather he distorts and exploits Scripture to defend his political positions.

Of course, such admissions would require a commitment to honesty.

The secret, which is a dirty secret only to “progressive” pundits, is that it is constitutionally permissible for theologically conservative Christians to allow their religious beliefs to shape their political decisions.

So, brothers and sisters in Christ, step out of your homes  and pews and speak truth in the public square. Bring your coats. It’s chilly out there.