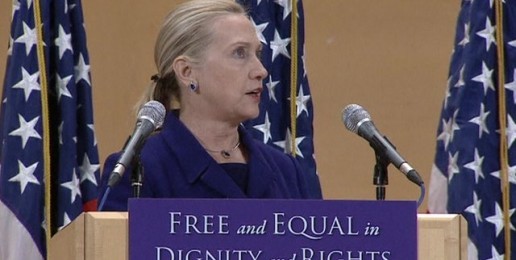 On Dec. 6, 2011 Secretary of State Hillary Clinton delivered a speech in honor of International Human Rights Day which is celebrated on Dec. 10, the date in 1948 when the United Nations formally adopted the Universal Declaration of Human Rights. But as we should have expected from a representative of the fervently pro-perversion Obama Administration, Clinton used the occasion to promulgate unproven, liberal assumptions about homosexuality and Gender Identity Disorder (GID).

With the usual cunning of the Left, Clinton begins her speech by referring to the “beating, terrorizing, and executing” of homosexuals, but then with some skillful bait-and-switch rhetoric, she starts talking about undefined “discrimination.” Such a speech would be justified if Clinton were actually concerned only with real human rights abuses such as draconian laws that call for the execution of homosexuals or for acts of violence ignored by police. But anyone familiar with the incoherent world of “progressivism,” understands that moral disapproval of homosexual acts becomes “discrimination” which ineluctably results in “bullying” or “terrorizing.”

Clinton’s repeated use of the absurd comparison of race to homosexuality reveals that intelligence is no guarantee of wisdom. Even really smart people often hold ignorant and foolish ideas. Whereas race is 100 percent heritable, in all cases immutable, and has no behavioral implications that are amenable to moral evaluation, homosexuality is not biologically determined, is in some cases changeable, and is constituted by volitional acts that are legitimate objects of moral evaluation. Someone should ask Clinton to explain the ways she believes race is analogous to homosexuality.

Since Clinton can’t appeal to reason, she pulls on the heartstrings of those in her audience for whom “feelings” trump moral reason: “We need to ask ourselves, ‘How would it feel if it were a crime to love the person I love?'” If there are laws somewhere in the world that criminalize “love,” I haven’t heard of them. There are countries around the world that have unjust marital laws, but marital laws — just and unjust — prohibit acts, not feelings.

Clinton alludes to the Obama Administration’s troubling intention to withhold foreign aid from countries that don’t share the moral views of American “progressives” on homosexuality and cross-dressing and of the Obama administration’s creation of a Global Equality Fund which will use $3 million of taxpayer money to fund homosexuality-affirming efforts around the world. Peter Sprigg aptly describes this as “cultural imperialism.” The Obama Administration is using our taxes to disseminate non-factual, fallacious moral, philosophical, and political propositions throughout the world.

Clinton shared that she has experienced a “deepening” of her convictions about homosexuality as she has “devoted more thought to it, engaged in dialogues and debates, and established personal and professional relationships with people who are gay.” In the past, Secretary Clinton has been open about her Christian faith, and in this speech, she shared that her “religious belief and practice is a vital source of meaning and identity, and fundamental to who” she is. One wonders if in all her dialogues, debates, and thinking, she ever seriously studied the work of scholars throughout the history of the church on the topic of homosexuality. Since prior to the late 20th Century, no Old Testament or New Testament scholar affirmed what some refer to as “gay theology,” it’s surprising to see intelligent people like Clinton (and Obama) embracing what many of the best scholars, including contemporary biblical scholars, would consider heresy.

Clinton concluded with these words: “As it has happened so many times before, opinion will converge once again with the truth, the immutable truth, that all persons are created free and equal in dignity and rights.” Ever the diplomat, Clinton implies without explicitly stating that her beliefs about the nature and morality of homosexuality are “immutable truths.” Whereas it is true that all humans are equal in worth and dignity, it is not true that all beliefs and behavioral choices are equal in worth or dignity. The troubling notion that permeates Clinton’s speech is that a society that honors the dignity and liberty of all must embrace the ontological and moral beliefs of homosexuals.

For progressives, powerful, persistent feelings and volitional acts — at least powerful, persistent homosexual feelings and acts — are constitutive of identity and inherently moral. For progressives, to believe such feelings are disordered and such acts immoral represents an act of illegitimate discrimination against persons. But Christians understand that in this fallen world, our feelings are disordered, our will perverted, and our intellect corrupted — hence the need for laws.

And on that point IFI agrees with Secretary Clinton who accurately stated that “progress comes from changes in laws…. Laws have a teaching effect.” The question is, will America have laws that embody and teach truth — or not?