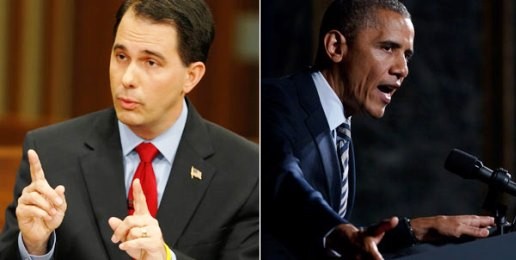 Wisconsin governor Scott Walker is in hot water with omniscient Chicago Tribune pundit Rex Huppke for claiming ignorance about President Barack Obama’s faith. In answer to a question about whether he believes Obama is a Christian, Walker said he didn’t know.

So, what’s a politician to do? hmmm…

I know, give the answer “progressives” desire. Leftist columnist Rex Huppke pontificated that this is what politicians should assert about the interior religious beliefs and affections of Barack Obama: Yes, Obama is a Christian.

Since I’m not privy to the interior beliefs and affections of Huppke, I don’t know if he believes Obama is a Christian or if he’s merely suggesting that this is the most strategically savvy response.

In order to help illuminate Obama’s faith for those who believe that possible 2016 presidential contenders must have a definitive and correct opinion on whether a lame duck president is a Christian, here are some Bible verses followed by relevant actions of or statements by Obama:

On salvation: Jesus said, “‘I am the way, and the truth, and the life. No one comes to the Father except through me.’”

In contrast, Barack Obama holds this belief on salvation:

There’s the belief, certainly in some quarters, that [if] people haven’t embraced Jesus Christ as their personal savior that they’re going to hell….I find it hard to believe that my God would consign four-fifths of the world to hell….That’s just not part of my religious makeup.

On “gender”: The Bible teaches “So God created man in his own image, in the image of God he created him; male and female he created them.” And it teaches that “A woman shall not wear a man’s garment, nor shall a man put on a woman’s cloak, for whoever does these things is an abomination to the Lord your God.”

According to the executive director of the National Center for Transgender Equality, Obama “has been the best president for transgender rights, and nobody else is in second place.” The public may be largely unaware of his anti-biblical position on “gender,” however, because Obama has kept his actions intentionally “low-key,” working through executive orders and federal agencies unaccountable to the public.

On marriage: Jesus taught this:

“Have you not read that He Who made them in the first place made them man and woman? It says, ‘For this reason a man will leave his father and his mother and will live with his wife. The two will become one.’ So they are no longer two but one.”

Obama, in direct opposition to Christ’s teaching, asserts that “same-sex couples should be able to get married.”

“[T]heir women exchanged natural sexual relations for unnatural ones. In the same way the men also abandoned natural relations with women and were inflamed with lust for one another. Men committed shameful acts with other men, and received in themselves the due penalty for their error.” (Rom. 1:26-27)

“Do not be deceived: neither the sexually immoral, nor idolaters, nor adulterers, nor men who practice homosexuality, nor thieves, nor the greedy, nor drunkards, nor revilers, nor swindlers will inherit the kingdom of God.” (1 Cor. 6:9)

“I am proud to be the first President to appoint openly LGBT candidates to Senate-confirmed positions in the first 100 days of an Administration…. LGBT families and seniors should be allowed to live their lives with dignity and respect….I, BARACK OBAMA, President of the United States of America, by virtue of the authority vested in me by the Constitution and laws of the United States, do hereby proclaim June 2009 as Lesbian, Gay, Bisexual, and Transgender Pride Month. I call upon the people of the United States to turn back discrimination and prejudice everywhere it exists.IN WITNESS WHEREOF, I have hereunto set my hand this first day of June, in the year of our Lord two thousand nine.”

On holiness: Holy means set apart for God, sacred, morally perfect, and worthy of veneration. The Bible teaches, “Who will not fear, O Lord, and glorify your name? For you alone are holy. All nations will come and worship you, for your righteous acts have been revealed.”

In a speech in Cairo, Egypt, Obama describes the Koran as the “Holy Koran.”

On murder: The Bible teaches, “You shall not murder,” and “Your eyes saw my unformed substance; in your book were written, every one of them, the days that were formed for me, when as yet there was none of them.”

Obama defends the legal right to kill preborn children—including third-trimester babies capable of feeling pain and surviving outside the womb and on whom doctors perform surgery.

On lying: The Bible teaches that “Lying lips are an abomination to the Lord, but those who act faithfully are his delight,” and “Do not lie to one another, seeing that you have put off the old self with its practices and have put on the new self, which is being renewed in knowledge after the image of its creator.”

Barack Obama told the “Lie of the Year” when he stated that under Obamacare, “If you like your health care plan, you can keep it.”

According to Obama’s friend and former campaign manager, David Axelrod, Obama lied during the last campaign when he said he opposed the legalization of same-sex “marriage.”

And Obama lied when he said he has not changed his position on using executive authority to stop deportation of undocumented immigrants.

On false teachers: Saint Peter writes that “false prophets also arose among the people, just as there will be false teachers among you, who will secretly bring in destructive heresies, even denying the Master who bought them.”

Obama announced that “The future must not belong to those who slander the prophet of Islam.” Does Obama consider it slander to say that Mohammed is a false prophet who has brought destructive heresies to the world?

Inquiring minds wonder what Huppke thinks of I John 2:4, which says this about those who claim to be followers of Christ: “Whoever says ‘I know him’ but does not keep his commandments is a liar, and the truth is not in him.”

Or what Jesus said in Matthew 7:

Or these words of Jesus: “Beware of false prophets, who come to you in sheep’s clothing but inwardly are ravenous wolves. You will recognize them by their fruits.” What kind of fruits do lying, denying the singularity of the salvific work of Christ, the promotion of same-sex mirage, the vigorous support of intrauterine murder—including the murder of nearly full-term babies—constitute? I would argue his fruits are fetid, poisonous fruits.

Jesus tells us to “Judge not, lest ye be judged.” The Left mistakenly believes that this means Christians must not discriminate between right and wrong actions. Well, that’s not exactly accurate. The Left believes that Christians ought not hold any biblical views on behavior with which the Left disagrees. So, it’s fine by “progressives” to “judge” racism and bestiality as wrong but wicked to “judge” homoerotic activity as wrong.

God has provided us with his Word to help us discern truth from lies and right from wrong. I guess it can be used too to help possible presidential contenders figure out if Obama is a Christian. Of course, only God knows with certainty if Obama is a follower of Christ. What’s curious is how Rex Huppke has concluded with dogmatic absolutism that Obama is a Christian.