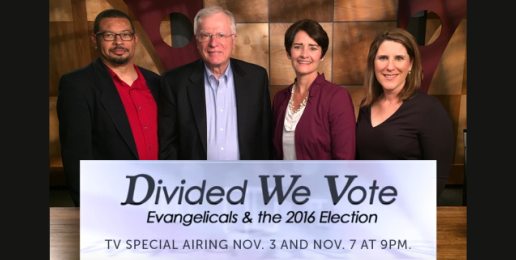 Are #NeverTrumpers handing the election to Hillary and destroying the future of America? Are evangelical leaders, by supporting a morally flawed — or even unfit — candidate like Donald Trump, tarnishing the witness of the church?

These gut-wrenching questions and accusations are pulling Christians apart in what has arguably been the most divisive presidential election in our lifetime. Given these deep divisions, how can Christians ever unify? What criteria should evangelicals use when choosing a candidate? And, what will be the long-term effects of this election on the Religious Right?

I’ll explore these questions and more in Divided We Vote: Evangelicals and the 2016 Election, a special television broadcast this Thursday at 9 p.m. Central Time on Total Living Network.  Divided We Vote will also be posted here on www.julieroys.com.

Joining me will be Dr. Charmaine Yoest, a senior fellow with American Values, who is voting for Donald Trump and endorsing him; Dr. Erwin Lutzer, pastor emeritus of Moody Church, who refuses to endorse Trump, but says he will vote for him; and Dr. Vincent Bacote, who refuses to vote for either Trump or Clinton.

This honest, and sometimes raw, discussion exposes the diverse, but deep convictions driving evangelicals this election season. But it also offers hope, and reveals the spiritual bond between brothers and sisters that transcends political differences. Please join me for this important broadcast underwritten by my friends at the Illinois Family Institute.

Watch on JulieRoys.com and join in the conversation.

Illinois Family Institute is a proud co-sponsor of this special broadcast to educate the Christian community!