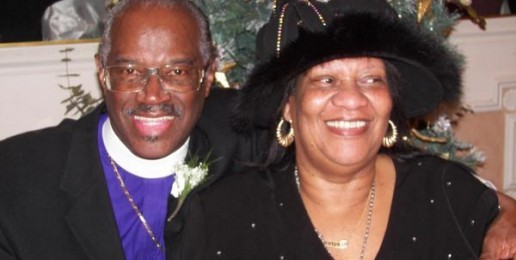 Bishop RD Edwin Goodwin Sr. leads the Northwest region of the International Church of God in Christ (COGIC).  He speaks for 500 churches in Illinois.

Motivated by love of God and love of neighbor, Bishop Goodwin wrote to Governor Patrick Quinn on January 31st:

“We the Bishops of the Northwest Area of the Church of God in Christ in Illinois, and its 500 churches in the state of Illinois, stand united against same sex marriage in this state.”

He continued, “In the upcoming elections, we will continue to stand united for what we believe in and for candidates who have similar mindsets as ours.”

Last month I spoke to a group of COGIC pastors on the south side of Chicago who recognize the dangers of “homosexual marriage.”  I’ve been traveling around the greater Chicagoland area meeting with pastors who are concerned about the same-sex “marriage” push.  They are motivated to do what is necessary to confront this evil.

One such pastor is Keith Williams who recently took time from his busy ministry schedule to attend a the Illinois Senate Executive Committee hearing on this issue.  Williams, a black pastor, confronted the issue head on.  He told the politicians the truth, asserting that same-sex “marriage” is immoral.  He quoted from Genesis in the Bible, “For this reason a man will leave his father and mother and be united to his wife, and they will become one flesh.”  He predicted divine judgment on the state if it approves this evil.

In a recent presentation to the Hispanic Illinois Republican National Assembly, I expressed my concern over Christian apathy and indifference, a concern shared by Brian Camenker, a Jewish pro-family activist from Massachusetts:

There is a problem in the pro-family movement….Too many white congregations mean well but unfortunately don’t execute. They’re afraid to talk about biblical truth, lest it offend someone. They would often rather ‘pray about it’ than get involved. Individuals often can’t make the time in their busy lives to go out and make a difference. They are well-meaning but don’t have zeal. And as a result they’re usually woefully disorganized and ineffective when it comes to meaningful social action. I’ve had many clergymen lament this to me. This is true even in the Orthodox Jewish community, where often it’s individual rabbis who carry most of the pro-family action load by themselves.

I told the assembled Hispanic Republicans:

As a leader of a large state pro family group I wish that I could stand before you today and say that Mr. Camenker’s observations are inaccurate.  Unfortunately, I cannot.

Much of the blame for the potential looming loss of the institution of civil marriage lies at the feet of the Christian church.

In recent decades we have deliberately failed to make the case for both Christianity and marriage, choosing to tolerate radical perversions of the idea of freedom.  This has done immeasurable harm to Christian and non-Christian alike.

Yet I am hopeful and encouraged by the signs of life in the body of Christ.  Over the past few months, in organizing against the effort to redefine marriage, I have had the privilege of working with many African-American and Hispanic pastors and religious leaders.  I am humbled by their dedication and courageous willingness to speak up on this issue – despite the cultural forces that seek to intimidate us into silence.

In his letter to the Corinthians, St. Paul compares the diverse Christian community to the human body, saying that “the body is not one member but many”:

At the end of a recent meeting in Aurora, I watched a Hispanic pastor invite an African-American pastor to a monthly meeting of other pastors. It is a great joy to see that God is at work connecting the body of Christ through the threat to his institutions of marriage and family.

There is much more work to be done if the body of Christ is going to realize fully its God-given potential to influence the culture for the glory and honor of Christ  in Illinois.  If you haven’t yet spoken out, now is the time to join us!  God is doing a work here in Illinois – but he uses people like you and me to accomplish his goals.  Please join us!

For the few of you who cannot make it, please schedule meetings with your state representatives in their local offices and/or call their Springfield office through the Capitol switchboard at (217) 782-2000  to voice your concern about the effort to redefine God’s institution of marriage..

Click HERE to support the work & ministry of IFI.