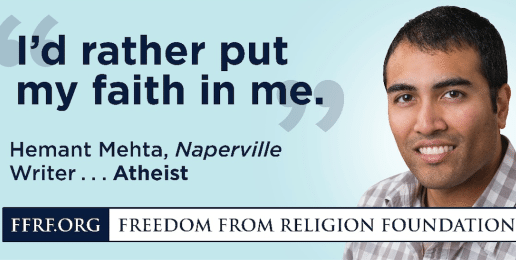 A new Chicago-area billboard campaign from the aggressively offensive Freedom From Religion Foundation (FFRF) exposes again this organization’s hostility to and childish misunderstanding of Christian faith.

The FFRF has announced that eleven billboards are going up with these special holiday messages:

A few brief responses to the FFRF’s shallow slogans:

1. Kind acts are “friendly, generous, warmhearted, charitable, generous, humane, and/or considerate acts.” Altruism is unselfish concern for the welfare of others. Kind acts may be motivated by ignoble, selfish sentiments—perhaps even a wrong theological belief that one earns salvation through one’s actions. But kind acts can also be motivated by altruism that derives from faith in Christ.

Kindness can be the result of the regeneration that God performs in the hearts of believers, which deracinates selfishness and naturally results in desires more in line with God’s nature. Kindness can result from an overflowing of thankfulness for God’s great gift of salvation, which makes followers of Christ love and give more unselfishly, often even sacrificially.  They act kindly and altruistically not to gain reward but to thank God and to express his love to others.

2. Finding the Old and New Testament writers to be persuasive no more constitutes a failure to “think for yourself” than does finding the ideas of Bertrand Russell, John Rawls, Richard Rorty, Daniel Dennett, or Richard Dawkins persuasive. And believing that reality is not exclusively material does not constitute a failure to think logically.

3. Equality—properly understood—is advanced by Christian faith. Equality demands treating like things alike, and increasingly both those who embrace an atheistic scientific materialism and people who embrace heterodoxy are incapable of recognizing fundamental truths—including even facts—about human nature. Therefore, they are incapable of identifying which phenomena are in reality alike.

4. First, one can make an argument that those who most fear, for example, death are those who have an unproven faith in the non-existence of an afterlife.  Second, a superstition is “a belief held in spite of evidence to the contrary.” As such, the Christian faith does not constitute a superstition, because there is ample evidence for the existence of God and his human incarnation, Jesus Christ. Atheists reject the evidence based on their a priori assumptions about what constitutes evidence.

6. Faith in self alone reflects the kind of hubris that leads more often to intellectual and moral error than it does to altruism.

“The Christmas message is that there is hope for a ruined humanity—hope of pardon, hope of peace with God, hope of glory—because at the Father’s will Jesus Christ became poor, and was born in a stable so that thirty years later He might hang on a cross.” ~J.I.Packer