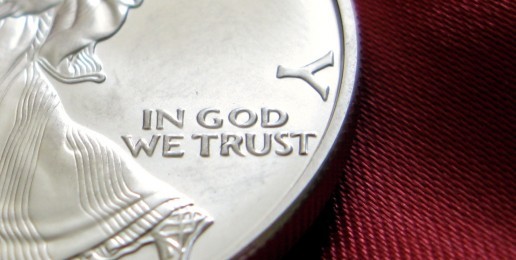 “In God We Trust” is the national motto, even though Barack Obama told a Jakarta, Indonesia audience last November that our national motto is E Pluribus Unum (out of many, one).

At least Obama got the translation right. Al Gore once said that it meant “out of one, many.” Perhaps he was employing the same math formulas that work so well in his global warming calculations.

The real motto is, indeed, “In God We Trust,” and Congress re-emphasized this on Oct. 25, passing a resolution saying so in a 396 to 9 vote. Sponsored by Rep. Randy Forbes (R-VA), the bill affirms the motto and “encourages its display in public buildings and government institutions.”

Forbes explained that the reminder was needed in light of Obama’s recasting of the motto and also because of the mysterious replacement of the motto at the National Capitol Visitors Center “with stars in a replica of the House Chamber – and cropping an actual picture of the chamber so you could not see the words ‘In God We Trust.'”

Well, the idea of affirming “In God We Trust” was too much for Jerrold Nadler, the New York progressive who represents ACORN in the House of Representatives and also the socialist Working Families Party and Occupy Wall Street.

Nadler’s comments mirror those of President Obama, who rebuked the House and delivered this non sequitur: “I trust in God, but God wants to see us help ourselves by putting people back to work.” Translation: God wants big government to get even bigger.

Jay Carney, Obama’s spokestheologian, further mangled things by asserting that, “I believe that the phrase from the Bible is ‘the Lord helps those who help themselves.'”

Sorry, Jay, that phrase is not in the Bible, which the White House later admitted.

It’s not that Nadler opposes resolutions per se. He sponsored a resolution in 2009 commemorating the 40th anniversary of the drag queen revolt known as the Stonewall riots. He also sponsored a resolution in 2009 condemning the murder of “pro-choice doctor” and “health care provider” George Tiller, the Wichita abortionist. Tiller, who was shot to death at his church, was the nation’s leading practitioner of the gruesome infanticide known as partial birth abortion.

It’s good that Nadler is against people being shot, especially in church, but it’s curious that the Forbes resolution acknowledging America’s debt to God for our abundant blessings drives him crazy enough to take the floor to condemn it.

Well, okay. How about unemployment? Nadler reliably voted against the job creation bills that the House passed in recent months, all of which were aborted in Harry Reid’s Senate upon delivery.

And if we’re supposed to be addressing “real issues,” where is the evidence that in a time of massive unemployment and economic uncertainty, Americans are just itching to redefine marriage as two guys on a pink cake? Nadler is a chief sponsor of the bizarrely titled Respect for Marriage Act, which would dump a Capitol Domeful of cowpies right on the institution of marriage, destroying its real meaning.

It makes perfect sense that a leading progressive would hate the thought of honoring God while trashing the institution created by God as the fountainhead of families, churches and communities. Those things get in the way of the all-powerful state, which has a devil of a time creating the new socialist man while families, churches and communities are imbuing citizens with personal responsibility.

Speaking of the new socialist man, it’s also difficult to birth this creature as long as the United States still has freedom of the airwaves. That may be why Nadler in January called for re-imposing the Fairness Doctrine, the FCC’s stranglehold on broadcasters that was lifted in 1987, leading to an explosion in conservative talk shows.

If you recall, progressives were calling for “civility” and trying to blame talk radio and conservatives in general for the January 8 wounding of Arizona Democrat Rep. Gabrielle Giffords and the killing of at least six people by Nazi-inspired nutcase shooter Jared Lee Loughner at a Tucson shopping center.

However, in August, the FCC finally took the Fairness Doctrine off its books, and it remains to be seen whether progressives like Nadler will continue their Dracula impression, trying to pry open the crypt anyway, releasing the monster in a different form.

Right now, Nadler is busy siding with the Occupy Wall Street protesters over the interests of his own constituents.

Asked by the Washington Times about complaints from businesses in his district around Zuccotti Park that are experiencing loss of customers, restroom overload, broken sinks and other delights, Nadler responded, “I think businesses are being damaged a hell of a lot more by our stupid economic policies and all of us have to live with expressions of democratic demonstrations or whatever.”

Become a Sustaining Partner of our Work

You can become a Sustaining Partner with automatic monthly deductions from your checking account or credit card. Click HERE to access the Sustaining Member form. Your gift will go even further than ever because:

How The ‘Revolution’ Is Eating Its Own
b
a
x
r