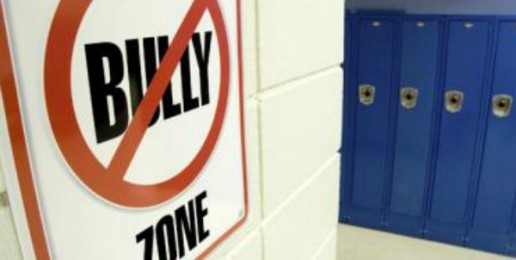 Let’s face it: Kids can be really dumb. I know, because I was once a kid.

In kindergarten, I accidentally tied myself to a playground tetherball pole, leaving myself stranded and dangling when the recess bell rang. In sixth grade, I permed my hair into a ball of frizz — on purpose — and then proceeded, on a daily basis, to painstakingly curl my bangs into a hairspray-crusted, dinner roll-shaped aesthetic tragedy.

In high school, I decided to go skiing before actually learning how to turn, or stop. (I did, at least, remember to say, “Excuse me! Excuse me!” as I barreled into the skiers waiting in the lift line, crash-landing in a tangle of ski poles, a snow pile freshly plowed by my face.)

So, yes, kids can be dumb. But they can also, as a new book reminds us, be disturbingly mean.

In “Sticks and Stones: Defeating the Culture of Bullying and Rediscovering the Power of Character and Empathy,” Slate editor Emily Bazelon examines bullying on a national level, tracking the lives of student victims and victimizers (sometimes, as the book points out, they are one and the same) and suggesting ways for parents, kids and schools to clamp down on mean girls, “thugs in training,” and abusive peer relationships.

With such a charged topic — press coverage of several recent student suicides, for instance, rushed to blame bullying while ignoring other factors — Bazelon’s book is well-researched and even-handed, recognizing that much of the hue and cry against modern American bullies stems from media-driven sensationalism. Bullying itself, she notes, is not actually on the rise. But modern technology can certainly make it worse, expanding schoolyard teasing into 24/7 torture.

Meanwhile, horrifying school shootings like Columbine or Sandy Hook add fuel to the fire, even though those perpetrators likely suffered more from mental illness than being snubbed by the in-crowd.

Regardless, the details churn the stomach: foul language, verbal abuse, and targeted taunting are literally child’s play in many schools; more advanced bullies push, trip, assault, pee on, and cyberstalk their targets. The book introduces readers to kids with a shocking lack of empathy, who are “untethered, at school and at home,” and often face depression and other challenges. Some schools profiled by Bazelon are filled with “gangs, weapons, and drugs”; others merely host a “deep culture of combat” — and this includes the teachers.

These are, it should be emphasized, public, taxpayer-funded, government-run schools. And yet, amid a sea of guidance counselors, teachers, and administrators, funded to the tune of $14,350 per student, apparently no one in Phoebe Prince’s Massachusetts school found it alarming that a young girl with a history of depression chose to write a book report on the following tome: “Cutting: Understanding and Overcoming Self-Mutilation.”

Prince would later commit suicide, and her alleged bullies would be prosecuted by the state’s DA. One would also think that at $14,906 per student (the latest numbers from Connecticut), a young girl named Monique, facing constant persecution, would be able to freely transfer to a different school. Silly us! Of course she can’t — until a lawyer with “connections” gets involved.

These are my opinions, by the way, not Bazelon’s. “Sticks and Stones” isn’t primarily concerned with the efficient usage of tax dollars; it aims to address the problem of bullying, and for the most part, it does a good job. But when I finished the book, I wasn’t really worried about bullying. Instead, I was filled with a slow-growing dread as I comprehended the breadth of the mission creep unfolding in America’s public schools — a spectacle to which “Sticks and Stones” serves as an inadvertent, perhaps unwitting, guide.

“The behaviors we’re seeing, you wouldn’t have seen ten or fifteen years ago,” says one superintendent of a troubled school. “We’re taking on the social and emotional education of students in a way we never used to have to do.” Another principal is more blunt: “I’ve worked hard to get the staff to understand that we are the family,” he says. “We are raising these children.”

Indeed they are, and in “Stick and Stones,” Bazelon advocates that they do even more. When it comes to the bullying of gay or lesbian students, for instance, she writes, “research shows that schools have to teach not just tolerance of an alternative lifestyle — the old code for keeping homosexuality at arm’s length — but acceptance. They have to teach, early and often, that there is nothing wrong with the sexuality of gay students or with the lives they lead.”

To do that, she argues, we should start them young, putting “books such as Heather Has Two Mommies or My Princess Boy on the kindergarten or first-grade bookshelf.”

You’ll have to excuse me for a moment, as I believe few dozen capillaries just ruptured inside my head. I think we can all probably agree that the bullying of gay and lesbian students is unconscionable. I also don’t care what consenting adults do in the bedroom, and I don’t think the government should care either. But I certainly do care if you try to promote sexual content to my 5-year-old while he’s at school. (I guess the good news, if one can call it that, is that many government schools can’t teach kids to read. Take that, Princess Boy! You might as well be written in Farsi!)

This isn’t, of course, really about sex. It’s about the government’s incredible and growing reach into our lives (Michelle Obama at the Oscars, anyone?) and a prime example of classic governmental “problem solving.”

Rather than addressing bullying problems by, say, not tolerating bullying in schools, we, the bureaucracy, shall heretofore attempt to overhaul the entire social and religious system of America. Good thinking, guys! But wait: Under the “forced acceptance stops bullying” philosophy, should schools also teach that there is also nothing wrong with poor hygiene or being dangerously obese? Those kids, after all, get bullied too.

Do we also need a copy of “Bobby’s Daddy Hasn’t Showered in Sixteen Days, and He’s Bingeing on Cheetos, and That’s OK”? (By the way, I am by no means equating being gay with being overweight or odorous. This should be obvious, given the large number of gay people who are trim, well-groomed, and well-dressed, but you never know.)

The common-sense solution to bullying, of course, would be to monitor kids, discipline them in a consistent manner, and have a well-communicated zero-tolerance policy. (Bazelon, to her credit, offers a thorough profile of a program, called the Olweus method, that does just that.)

You could also teach kids that all human beings are worthy of respect and love and should not be tormented, but that might be too simple for the people who brought you Obamacare. Plus, it’s just not as fun as social engineering. “You’re asking a school to do something differently than what’s done at home and church,” Whitney Pellegrino of the Justice Department tells Bazelon. “It’s a long process.”

If that quote doesn’t scare you, nothing will. Sadly, many families appear to have checked out of the whole “child-raising” thing, and it shows. Nature, as they say, abhors a vacuum, and so, apparently, does the government’s education establishment. When families check out or disintegrate, something will move in to take their place.

In other words, meet the new parents . . . and be at least a little afraid.

Heather Wilhelm is a writer based in Chicago. http://www.heatherwilhelm.com/