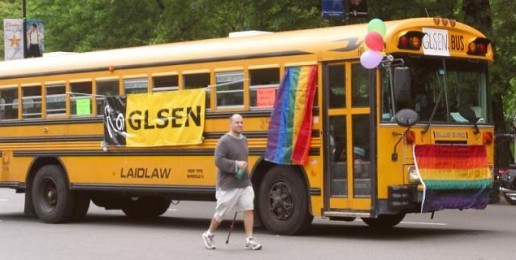 What We Should Learn from Deviant Sexuality Activists in Aurora Illinois School District (Part 2)
Written By Laurie Higgins   |   01.15.13
PRINT

Yesterday, I discussed the dishonesty of the Gay, Lesbian and Straight Education Network (GLSEN) when reporting on the ill-conceived “transgender” policy at East Aurora High School in Aurora, Illinois and the school board’s dissolution of the ad hoc committee that included five deviant sexuality activists from outside the community. Anyone who naively believes the dissolution of this unelected committee due to community opposition is the definitive end to this story should read the email below that was sent by one of the activists to the other ad hoc committee members. It reveals the  presumptuousness, self-righteousness, and tenacity of “LGBT”-affirming activists:

For myself and the hundreds of supporters of transgender students and their families in the East Aurora Schools, I was extremely disappointed to learn that the District 131 school board dissolved the Ad Hoc Committee.  I learned this, not as a courtesy from anyone at the district, but from the news media.  Learning secondhand about the decision sends a clear message that the district does not value the many exhausting hours members have volunteered and that the work we have done has been for nothing.  Notwithstanding recent events, we know that we have been a part of a critical conversation that must continue for the health and safety of East Aurora youth and families.

Dissolving the Ad Hoc Committee fails the community and the district.  The dialogue beginning to develop presented an important opportunity for education and agreement on the best approach for the district to support a population of its students.  The difficult nature of the dialogue reveals just how critical it is that we have it.  The fact is that there are transgender students in East Aurora Schools (and all schools) and it is the district’s obligation to support and protect them.  Quitting the work now leaves unaddressed the damage done and a community divided.  Not to mention the liability incurred in recognizing the need for the work and then walking away.

The work we’ve started is simply too important to abandon and the young people to whom we and the district are beholden deserve our thoughtful attention.  Thus, I propose that we continue the discussion with or without the official stamp of the school board.

A few points in response:

And Illinoisans in other communities need to be prepared to be equally tenacious because advocates like Schriber are coming to your schools–including your elementary schools. Unfortunately, many are employed in your schools even now, working behind the scenes to create policy and exploit curricula in their efforts to transform the beliefs and values of your children.