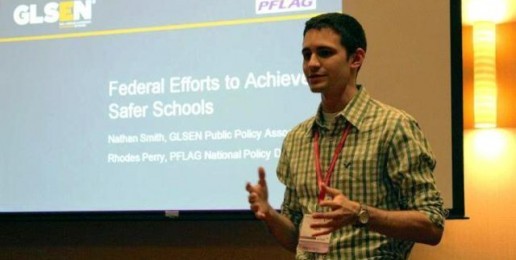 What We Should Learn from Deviant Sexuality Activists in Aurora Illinois School District (Part 1)
Written By Laurie Higgins   |   01.14.13
PRINT

Anyone who’s concerned about the increasing involvement of deviant sexuality activists in our public schools should pay close attention to recent events in Aurora, Illinois—events that may unfold further. Those who believe the issue is over do not understand the obsessive fervor with which these activists pursue their dystopian vision, including corrupting the hearts and minds of our children.

To review, an administrator (Christine Aird) in East Aurora School District 131 worked behind the scenes last summer with an activist from the “LGBT”-affirming organization, ironically named the Illinois Safe Schools Alliance, to come up with an unnecessary school policy that would have permitted gender-confused students to use the restrooms and locker rooms of opposite sex students. This administrator then misled the school board into thinking that such policy was required by state law. Public opposition to the policy resulted in the school board rescinding the policy four days later.

Subsequently, the board formed an unelected, ad hoc committee to revisit policy for gender-confused students. On this committee sat two homosexual activists from outside Aurora, an activist from the Illinois Safe Schools Alliance who does not live in Aurora, and two cross-dressing men who do not live in Aurora.

Well over 100 Aurora community members, most of whom were Hispanic, showed up at ad hoc committee and school board meetings to express their strong opposition to any policy that would allow students to use restrooms and locker rooms of opposite sex students. They also expressed opposition to non-community members serving on any committee that was creating policy for the district. As a result primarily of community involvement, the school board disbanded the ad hoc committee after just two meetings.

In reporting on this story, Nathan Smith, public policy associate for the Gay, Lesbian and Straight Education Network (GLSEN) managed to accomplish what I thought was impossible: diminish my view of GLSEN. His GLSEN blog post about this entire debacle was dishonest in two significant ways.

First and most important, Smith attributed the decision of the East Aurora High School Board of Education to dissolve the ad hoc committee solely to the Illinois Family Institute. Although IFI appreciates Smith’s assessment of our influence, his assertion is untrue, likely deliberately deceitful, and unfair to the scores of Aurora citizens who were most responsible for the decision of their school board to dissolve the ad hoc committee.

His assertion that IFI was responsible reflects either journalistic incompetence or deliberate dishonesty or both. The article I wrote in which I urged Illinoisans, particularly Aurora community members, to contact the board of education was published before the ad hoc committee had even formed.

It was the Aurora community members who showed up at the second meeting of the ad hoc committee and a subsequent school board meeting who were responsible for the school board’s decision to dissolve the committee, and yet Smith never said a word about their attendance at these meetings and their vocal opposition to the controversial policy.  It’s mind-boggling that anyone reporting on this event would fail to mention that over 100 community members attended the meeting and opposed both the policy and the composition of the ad hoc committee.

It’s obvious why Smith would omit these inconvenient truths from his blog post. It serves GLSEN’s strategic purposes to conceal community opposition to the perverse goals of deviant sexuality advocates—goals that GLSEN relentlessly promotes. It also serves GLSEN not only to distract the public’s attention from the effectiveness of community involvement but to drum up hatred against IFI. Although, I understand Smith’s strategic reasons for his startling omissions, I would hope that a commitment to truth and accuracy would supersede GLSEN’s strategic interests.

Second, Smith erroneously claims that the East Aurora School Board disbanded “efforts to protect” gender-confused students. What the school board did was disband the committee on which multiple activists who were not Aurora community members were serving and which the community opposed. Smith assumes that the only way to protect students who suffer from gender confusion is to maintain a committee composed of unelected, non-community members; to accept his ontological and moral presuppositions about gender confusion; and to enact policy with which he agrees. In a diverse world, however, there are multiple, competing visions of how best to respond to and protect those who experience gender confusion.

One final point, unlike the “progressive” activists who actually served on the ad hoc committee while not living in Aurora, I only wrote about the story, as did homosexual and gender-confused activists all over the country. No IFI employee even attended a meeting of the school board or ad hoc committee.