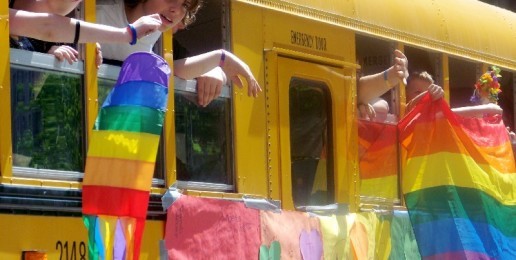 Next week, the Chicago Board of Education will vote on the proposed Social Justice High School-Pride Campus that Chicago Public Schools CEO Arne Duncan has endorsed. Rumors are circulating that, despite Mayor Richard Daley’s explicit opposition to the school, the board intends to vote in favor of it.

The Windy City Times, a Chicago newspaper serving the homosexual and “transgender” population, explains that “the school will exist as a training hub on LGBT issues and social-justice curricula for teachers, both locally and nationally. Social-justice history, practices and discussion will be embedded in the curriculum, allowing for all students, including LGBTQ youth, to find representation in the courses they are taking in school.” (See “Social Justice or Educational Injustice“)

It is critical to understand that the taxes of all Illinoisans, not just Chicagoans, will be used to subsidize this subversive project, because all public schools receive state funds. Arne Duncan and any member who agrees with Duncan that the state should subsidize this school had to have come to prior conclusions that homosexual conduct is safe and moral. If Duncan had concluded otherwise — if he had concluded that homosexual conduct is neither safe nor moral-he would never have recommended approval of this proposal.

It is clearly far outside both Duncan’s area of expertise and his professional responsibilities to make implicit proclamations on the nature and morality of homosexuality, and it is inappropriate to demand that taxpayers subsidize his controversial and unproven philosophical and moral conclusions.

The Windy City Times has taken notice of IFI’s efforts to oppose this school and is urging its readers to fight back, calling our letter-writing and email campaign “negative.” Our opposition to this school is only negative if our beliefs are wrong. If, however, our beliefs that homosexual conduct is volitional, unsafe, and immoral are correct, then our opposition to this school is a positive effort to protect teens, preserve a proper understanding of the nature and morality of homosexuality, and prevent our money from being used to promote radical, subversive ideas about homosexuality that will ultimately destroy marriage, destroy the natural family, and undermine fundamental First Amendment speech and religious rights.

It is cruel and tragic that those in positions of authority today are so bereft of both knowledge and wisdom that they claim that sexually confused teens deserve to have a homosexual identity affirmed. It is cruel and tragic that, despite the absence of any supporting research, so-called “educators” tell sexually confused teens that they were “born that way” And it is a grievous offense to demand that the public subsidize this ignorance, arrogance, and cruelty. If we truly love these teens, we will speak the truth.

Public schools must stay away from subjects that fall far outside the appropriate purview of public education. We have one week left to express not merely our opposition to, but our outrage about the proposed Social Justice High School-Pride Campus.

TAKE ACTION: Contact CPS Chief Arne Duncan and the Chicago Board of Education to express your opposition to the use of public funds to subsidize a school that affirms disputable and divisive views on homosexuality and gender-confusion.

To mail or fax a letter, send it to:

To send to the board of education, mail a letter to: