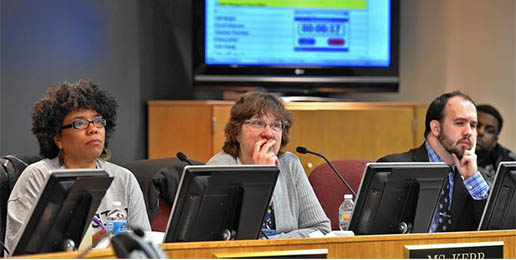 This Monday, September 26 is School District U-46’s next board meeting, and it is shaping up to be even more contentious than the barn-burner of a meeting two weeks ago.

As you may remember, the Friday before Labor Day, U-46 CEO Tony Sanders made the decision to allow a gender-confused middle school student to use an opposite-sex locker room. And Sanders also decided to conceal this information from district parents.

Only one school board member, Jeanette Ward, had the courage and integrity to notify parents via her Facebook page of this information. As a result, she has been on the receiving end of vicious, hateful, and false personal attacks.

Contrary to what Leftists in the district are saying, Mrs. Ward revealed no personal identifying information about the student. She did not reveal the student’s name, sex, or school.

Those in favor of co-ed locker rooms and administrative secrecy are furious that most of the speakers at the last board meeting opposed co-ed locker rooms and secrecy. The pro-co-ed locker room/pro-secrecy crowd is rallying the anti-physical privacy troops to attend Monday’s meeting and speak. If the past is any indicator of the future, there will be a lot of nasty epithets hurled by “tolerant,” diversity-loving “progressives” at conservatives in general and Mrs. Ward in particular.

Please prayerfully consider attending and making a statement, particularly if you live in the district or lead a church that has children in the district. Remember, every school district in the state receives a portion of its funding from the state and a portion from the federal government, so every taxpayer in the state has a vested interest in every public school. Further, while “progressives” are angry that some of the conservative speakers at the last meeting were from outside the district, “progressives” never object when “progressive” speakers from outside school districts speak at school board meetings—which, by the way, are legally open meetings and subject to the Open Meetings Act.

If you are active on social media, Mrs. Ward could use your support there as well. There is a Facebook group called “School District u46 Uncensored” on which there has been a sustained and vicious attack on truth and reason.  To see what Mrs. Ward is up against, spend a few minutes reading comments by clicking here.  If you have a Facebook account, you can ask to join this Facebook group and perhaps leave some comments in defense of truth.

“Progressives” have long demonstrated a tenacity, perseverance, and boldness that many conservatives lack. It’s time conservatives demonstrate that they are as passionately committed to truth as the Left is to lies.

I know that this request will entail sacrifice, but this is a cause worth the sacrifice. Please come alongside Mrs. Ward in this very difficult effort to defend the rights of children and their parents and to defend truth.

The U-46 School Board meeting is Monday evening, September 26th at 7:00 p.m. at 355 East Chicago Street in Elgin. If you would like to sit in the main school board meeting room, try to arrive between 5:30-6:00 p.m. If you can’t make it much before 7:00, there will be overflow rooms available where the meeting will be streaming live. Anyone who wishes to speak will be able to fill out a “request to speak card.” Comments are limited to three minutes. You may want to type up your comment and read it so as to ensure you don’t exceed the three-minute limit. Those seated in overflow rooms who wish to speak will be notified when it is their turn to make their comments. (Perhaps someone could ask school board member Traci O’Neal Ellis how referring to the Republican National Convention as the “Klanvention” on her Facebook page makes children from Republican families feel welcome.)

And to everyone who attended the last meeting, thank you so very much. Your support was inspiring and encouraging!

Please Prayerfully consider how you can support
the work and ministry of IFI through a donation.