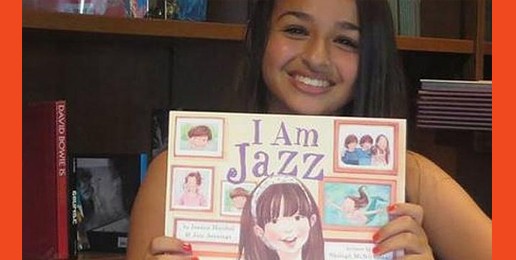 Recently at Horace Mitchell Primary School, a K-3 school in Kittery Pointe, Maine, parents were sent a letter explaining that  school guidance counselor Dana Rickerich had read a picture book to 20 of the 22 classes about a boy (yes, an actual boy) who experiences gender confusion—a picture book that the administration clearly deemed age-appropriate. Parents were not notified ahead of time, and, therefore, were not offered the option of exempting their children from exposure to Leftist beliefs about gender confusion.

According to the local press, superintendent Allyn Hutton said this about Rickerich reading I Am Jazz to 5-9-year-olds: “[E]ducating students about transgender people is important because there are students within the district that identify as such.”

Second, while Hutton may believe it’s important to expose young children to every phenomenon experienced by students in the school or affirmed by their parents, others disagree.

Third, if schools were not permitting cross-dressing and adopting changes in restroom, locker room, and pronoun-use policy that embody Leftist beliefs, young children who cannot possibly understand this psychological disorder would have no need to be “educated” about other students’ disordered desires.

Fourth, there is no justification for indoctrinating students into Leftist ideology on gender confusion.

It is tragic that these parents can never eradicate from the imaginations of their children the confusing and perverse ideas that presumptuous, ignorant government employees have now introduced to them. If these  employees truly understood and respected conservative beliefs, they would weep over what they have done—not merely regret getting caught in the blowback from their own hubris.

The parent of a gender-confused student in this district offered this feckless attempt at justifying the unjustifiable:

Reading ‘I am Jazz’ by Jazz Jennings to students is a way of showing them that gender can be more complicated than just boys and girls. Some people are born somewhere in between. LGBTQ issues should never be classified as a ‘sensitive subject’—there is nothing sensitive about the way we are born. Blonde hair, brown hair, gay, straight, or somewhere in between, we are all people and we all need acceptance.

Unless this parent is referring to children born with objective intersex conditions, he or she is wrong. What, pray tell, is this parent’s proof that some children with no genetic or anatomical disorders are born somewhere in between male and female?

Children born genetically male or female with fully functioning anatomy are boys or girls. It is unproven, subjective, Leftist assumptions that are making this issue unduly complicated. And an issue so fraught with complexity, subjective assumptions, and controversy is wholly inappropriate for 5-9-year-olds.

Further, this parent has no right to impose his or her absolutist belief that homosexuality and gender confusion “should never be classified as a sensitive issue” or the belief that acceptance of people requires affirmation of all their beliefs, desires, or behaviors.

Incidents related to gender confusion are happening with increasing frequency in elementary schools. In some schools, parents of gender-confused students are requesting permission to send letters to all families in their child’s school in which they appeal to the emotions of parents, trying to persuade them that cross-dressing is an appropriate and compassionate response to gender confusion. In other words, they are trying to persuade parents that Leftist assumptions should be adopted and that opposition to Leftist assumptions is cruel.

Would the principal of Horace Mitchell School permit the mother of a 7-year-old boy to whom Rickerich read I am Jazz send a letter to all families sharing the confusion and distress that discussions of Gender Dysphoria caused him and evidenced when he asked his mother “if he was ‘transgender’ or not and also whether or not he could be ‘a girl in love with a girl’”?

Rickerich shares her pernicious Leftist ideology on the school’s website:

Some may think primary school students are too young to worry about addressing issues surrounding gay, lesbian, bisexual, transgender and questioning (LGBTQ) students. Not so, experts say. It’s never too early to begin teaching children about respecting differences.

Does Rickerich actually believe that all differences are worthy of respect (which means to hold something in esteem)? One would hope that adults would be wise and prudent enough to know that some “differences” found in the human family are not worthy of esteem.

Now that “LGBTQ” activists are on the verge of hoisting their rainbow flags over public high schools and middle schools, they are arming themselves to take the battle for the hearts and minds of 5-11-year-olds. Ineffectual middle school and high school administrators and teachers—including even followers of Christ—have demonstrated time and time again that they lack the knowledge, wisdom, courage, and integrity to properly engage the enemy. And no matter how “nice” they are or well-intentioned, no matter how prestigious the academic institution from which they graduated or how many advanced degrees they have, those who seek to expose little ones to lies about sexuality and physical embodiment are enemies of God, truth, love, and families.

Emboldened purveyors of perversion seek to change the feelings and beliefs of other people’s children while these children are too young to think critically about an issue of such complexity. Moral regressives do this by deliberately exposing children to biased images and ideas and by censoring dissenting ideas.

So, when the confused parents of a gender-confused student come to your school requesting inappropriate accommodations, here are some questions and concerns that should be posed to school board members before they implement foolish and destructive policies:

Such a policy would teach students that “gender” is not related to or determined by DNA and manifest in biology and anatomy, but that it is determined solely by subjective feelings. Such a policy change would teach young children that their physical embodiment has no inherent, immutable meaning. It would teach them that their maleness or femaleness is wholly detached from physical embodiment, and that maleness or femaleness is determined by thoughts and feelings. This is a momentous and troubling proposition—not a fact—and public schools have no right to teach it either implicitly or explicitly through school policy. Further, no community member has any obligation to accept as true the theory that “gender” has no connection to DNA and anatomy.

5.)  Allowing gender-confused students to use opposite-sex restrooms would teach all students that modesty about one’s body is less important than the subjective feelings of those who experience gender confusion.

6.)  Regarding “age-appropriateness” of picture books about gender confusion:

First, parents should demand to know what specific criteria are used to determine “age-appropriateness” and specifically who (that means schools must name names) makes the determination regarding age-appropriateness.

Second, the central issue under debate concerns what is objectively true about physical embodiment. Public schools, which are arms of the government, should promote only that which is objectively true. Picture books about gender confusion are always biased, espousing only liberal views of gender confusion and cross-dressing. And a biased presentation of a highly controversial topic constitutes not education but propaganda.

These books are intended to persuade readers—including young impressionable readers—to accept one set of ideas about gender confusion. They are intended to appeal to emotions—not to critically examine the topic. These picture books advance one set of beliefs about the nature of Gender Dysphoria and how best to treat it.

7.)  No matter how well-intentioned, a letter from parents of gender-confused children to all families will embody only one set of beliefs about what gender-confusion is and what best serves the child. Such a letter will serve to manipulate the feelings of families and, therefore, is highly inappropriate.

8.)  Changes in restroom policy (as well as letters from parents and picture books) would teach all children in school that compassion requires that others affirm the belief that feelings—not bodies—determine maleness and femaleness. That is a controversial and subjective belief—not an objective fact.

9.)  Changes in restroom policy (as well as letters from parents and picture books) would teach all children in school that it is good to affirm the belief of a gender-confused child that he or she is, in reality, the opposite sex. Arms of the government, which public schools are, have no business affirming as objective truth such a subjective, arguable claim.

Pronouns correspond to objective biological sex—which cannot change. Pronouns do not correspond to the sex people wish they were. There exists no right for one segment of the population to unilaterally change grammar or demand that others subscribe to their novel and self-serving beliefs about grammar and  “gender.”

Taxpayers must with sense of urgency seek preemptively to establish in policy that restrooms, locker rooms, and pronoun-use correspond to objective biological sex. These issues are not trivial. We should know that by the passion and tenacity with which the Left pursues them. The policy changes that “progressives” are pursuing will necessarily teach lies  to all children about physical embodiment, cross-dressing, modesty, and compassion.

Join Us on May 7th

“Islam in America: A Christian Perspective”
with Dr. Erwin Lutzer