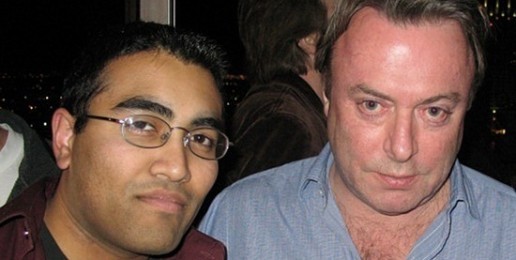 I was just sent a link to the blog of Neuqua Valley High School math teacher and not-so-friendly atheist Hemant Mehta who seems to spend a fair amount of time monitoring my writing. He is particularly exercised by my suggestion that parents request teachers for their children who do not abuse their government-subsidized positions to promote their personal “progressive” views on controversial moral or political issues.

“Progressive” teachers who view themselves as “agents of change” promote their views on a number of topics, particularly on American history, Critical Race Theory/Critical Pedagogy (although they may not use those terms in class), homosexuality, and gender confusion. They promote their views through their own classroom comments; the films, novels, plays, essays, and newspaper and magazine articles they choose; the speakers they invite; and through their refusal to introduce resources that explore competing views, that is to say, their de facto censorship.

In my article “Challenge Teachers, Not Texts,” I offer some ways for parents to try to ascertain who the “agents of change” may be in their schools, which I learned from working for ten years at Deerfield High School and from putting four children through the same school.

I want to make clear that not all teachers who hold Leftist moral and political views exploit their classrooms to advance them. I have known some exceptional teachers who hold far Left views but have no interest in exploiting their autonomy and public resources to promulgate them. Their interest is in teaching their subject matter, not proselytizing.

But it is equally true that the teachers who most often exploit their autonomy and public resources to try to change the moral and political beliefs of other people’s children are “progressives.”

Do Public Schools Challenge Students to Think Critically About Homosexuality?

What is most laughable about Mehta’s critique of my suggestions is that while mocking my reference to “cool teachers,” he tries to make the case that “cool teachers” are those “who challenge students’ thinking from all sides and make them see things in different ways.”

I would completely agree that the best teachers are those “who challenge students’ thinking from all sides,” which is exactly what does not take place in public schools on the topics of homosexuality, gender confusion, or Critical Race Theory. Can you imagine a public school teacher even using the terms “homosexuality” or “gender confusion”? Teachers who choose to address those topics will use only the rhetorical inventions of the Left: for example, gay, gender identity, or transgenderism.

While working at Deerfield High School, I kept a list of the resources presented to students that affirmed, espoused, or embodied liberal views of homosexuality. Starting freshman year and continuing through senior year, students were exposed to lectures, classroom comments from teachers, magazine articles, plays, novels, films, skits, theater department performances, gay-straight alliance presentations, and activities that affirmed liberal views of homosexuality, while not once in four years being asked to read even a single essay by a conservative scholar like Princeton Law Professor Robert George. Is that what Mehta sees as challenging “students’ thinking from all sides”?

Unfortunately, this ideological monopoly is not unique to Deerfield High School. This is a nearly universal pedagogical and ethical problem in public schools.

The “educators” at Teaching Tolerance, like so many agents of change, foster a peculiar kind of education that encourages students to “think from all sides” and “see things in different ways” as long as those ways conform to “progressive” dogma.

Here’s one of their recent projects for elementary schools:

Are you a gay or lesbian teacher who has addressed queerness with your young students? An LGBT parent with P-2 children? We want to hear your stories. Send a description of 200 words or less, along with your contact information, to editor@teachingtolerance.org.

Here’s another lesson for kindergarten through fifth grade:

Do Something! Transforming Critiques of Gender Stereotypes into Activism

One of the most empowering ways to overcome the damage done by internalized gender stereotypes is to counteract them actively—on a daily basis….Children benefit from participating in such activism because it helps them understand the socially constructed nature of gender. Activism also encourages constructive change so that they are not damaged by stereotypes.

In this lesson, students will discuss the meaning and nature of activism. They will brainstorm daily strategies they can use against gender stereotypes. They will also come up with ideas for bigger social action projects in their schools and communities.

“Progressive” agents of change believe in teaching preschoolers about “queerness” and teaching elementary school students to be activists in the service of a radical sexual ideology.

For someone who prides himself on his logic, Mehta, the atheist, uses little of it in his critique of my recommendations. Distracted by his own glib pseudo-cleverness, he ignores the substance of the issues I address. For example, in order to help parents know which teachers may be “agents of change,” I listed some of the symbols of the homosexuality-affirming movement, which activist teachers affix to their “spaces” to announce their moral and political beliefs, one of which is the lambda symbol (λ).

Mehta then mocked me for “going after physics and chemistry classes,” conveniently eliding the fact that the lambda is a well-known symbol of the movement to normalize homosexuality. While reveling in his ridicule, he forgets to mention that two homosexual advocacy organizations include “lambda” in their names: Lambda Legal and the Lambda Literary Awards.

Who Brings Their Views into the Classroom: “Progressives” or Conservatives?

Mehta was completely undone by my suggestion that parents find out who sponsors of Leftist clubs at their children’s schools, calling my suggestion “crazy.” He ranted:

Why? What would it matter? Teachers are legally allowed to be sponsors of those groups. If the GSA needed a faculty sponsor, I’d step up. If an atheist group ever formed at my school, I’d sponsor that, too. And if a Christian group couldn’t find a sponsor, I’d bite my tongue and help them out because they also have a right to meet after school and discuss their beliefs.

Just because teachers are sponsors of religious or political groups doesn’t mean they endorse the groups nor does it mean they espouse those views in the classroom.

But IFI won’t say that…. they just try and scare Christian parents into thinking that liberal teachers ought to be avoided at all costs….They have to make up problems to solve because no real ones exist. Anything they accuse liberal teachers of doing, they know Christian teachers have done the exact same things in a much more egregious way.

First, I never suggested it was illegal for teachers to sponsor extracurricular clubs.

Second, does Mehta actually believe that conservative Christian teachers have been using the classroom to promote their beliefs in a “much more egregious way” than have progressive agents of change, particularly on the topic of homosexuality? Can he provide evidence of conservative teachers assigning any resources that espouse conservative views on issues related to homosexuality?

Mehta goes on to say, “They (IFI) want to rail against liberal teachers — even ones like me, who keep our religious beliefs out of the classroom.”  I rarely criticize liberal teachers who keep their keep their religious, irreligious, moral, and political beliefs out of the classroom. Generally, I wouldn’t rail against such teachers. I would applaud them.

It is true, however, that I have criticized Mehta, but he omitted the issues for which I criticized him. I criticized him first for suggesting on his very public blog that homosexuals come and kiss in front of my home. Most school districts have policy regarding how their teachers interact with the public, which I believe Mehta violated when he publicly called for homosexuals to kiss in front of my home. It was both irresponsible and unprofessional of him to make such a suggestion even in jest.

I also suggested that his very public blog reveals something of his character and his beliefs about which parents of impressionable teens may be concerned.

On his very public blog, he ardently promotes atheism, commonly uses obscene language, and has provided platforms for the advocacy of polyamory. I suggested that parents who believe that teachers are role models for their children and who recognize that adolescents can be mightily influenced by teachers may not want him as a role model for their children. Teaching is unlike other professions. Teachers, whether they want to be or not, are role models. Mehta has every right to express anything he likes on his blog, and parents have every right to decide they don’t want their children under his tutelage—even for math.

Mehta, implies that my concern with teachers posting symbols that indicate affirmation of homosexuality means that I want students to feel “isolated, abnormal, and lost,” which is an ugly lie.

In order to treat students kindly and let them know that they are welcome and even loved does not require teachers, however, to affirm all of the feelings, beliefs, values, or life choices of every student. Does Mehta believe that unless teachers announce their affirmation of polyamory, polyamorous students will feel “isolated, abnormal, and lost”?

The vast majority of teachers believe that students should be free of verbal harassment and physical abuse. It is entirely possible to enforce policy designed to curb bullying without addressing personal beliefs about homosexuality or gender confusion.  The problem is that “progressive” agents of change believe schools can’t make students who identify as homosexual or “transgender” safe unless they—the teachers—affirm “progressive” views on the nature and morality of homosexuality.

No government employee, however, has the right in their professional role to affirm controversial, unproven, subjective beliefs about homosexuality or gender confusion.

Those teachers who express their Leftist moral or political views on homosexuality or gender confusion; or their views on same-sex marriage; or on same-sex adoption; or who assert that homosexuality is analogous to race; or who suggest that opposition to same-sex marriage is analogous to opposition to interracial marriage; or who choose to teach The Laramie Project are neither ensuring student safety nor “challenging students’ thinking from all sides.” Those teachers don’t care about diversity, critical thinking, or “honoring all voices.” Those teachers who expose students to resources from only one side of an issue are not educating. They are propagandizing.

Parents Must Oppose the Efforts of “Agents of Change”

Parents need to take a stand against public school employees using the classroom to advance their views on controversial moral and political issues. If school administrations won’t establish policy that requires teachers who assign resources on these kinds of issues to spend equal time on dissenting resources and if school administrations won’t establish policy that prohibits teachers from expressing their personal moral and political views in the classroom, then parents should request that their children be placed in the classrooms of teachers who demonstrate such integrity on their own.

The back-to-school article that Mehta is criticizing will be re-posted next week. It was not supposed to have been posted until it was reformatted with IFI’s new logo.

For background on the dubious Southern Poverty Law Center, click here and here.

The Revival of “In God We Trust” in Schools

Atheist Ignorance on Holiday Billboards
b
a
x
r