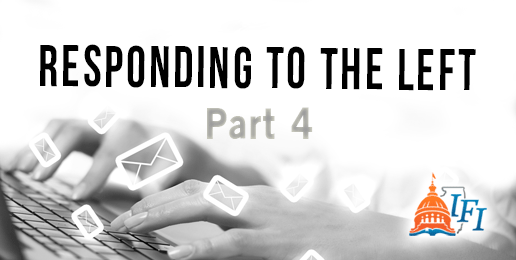 This is the fourth part of an email exchange between a public high school teacher and sponsor of the “gay-straight alliance” in a high school in Maine, and me. In this part, he makes clear what he presumptuously views as his right to do in his taxpayer-funded position. He and all teachers who share his pedagogical philosophy should be required to post their philosophies on their faculty websites. And every school should have strict policy prohibiting the kind of censorship that this “educator” promotes. To learn more about this correspondence, please read Part 1, Part 2 and Part 3.

I did revisit this morning the GLADD Commentator Accountability Project and was horrified. Just about every person you suggested should be invited into schools to present a conservative position on homosexuality is on that list: Robert George, Ryan Anderson, yourself as I mentioned and dozens more, some of whom are familiar to me: Tony Perkins, Frank Schubert and the worst of the worst Bryan Fischer. It’s a regular rogues gallery of bigotry and homophobia. Needless to say no responsible teacher, administrator, superintendent or school committee, conservative or liberal would ever subject any student to the hateful, vile attitudes and opinions of any one of those people. I am surprised you would recommend even one of those people. You say you have never looked at this project on line yet you say your quoted comments are what you most likely said. Laurie, for your own sake you should check this out before you ever make any recommendations for responsible discussion leaders. In short I believe that the ugly comments quoted on this site are the truth of yours and other’s positions. They are appalling, deeply offensive and absolutely dangerous for children. These comments are child abuse and have no place in a civil, polite environment of a school.

First, you are factually incorrect: Of the names you mentioned the only ones I recommended were Robert George and Ryan Anderson. I’m not “dissing” the other names you mentioned. I’m simply pointing out your inaccurate statement. Additionally, I didn’t recommend George and Ryan be invited to schools (although that’s a fantastic idea). I recommended that students be exposed to their work. And I did not recommend that students read my articles or that schools invite me in. I’m interested in neither. I recommended students be exposed to the ideas you and I have been debating.

If teachers are going to have students study texts like The Laramie Project, Rent, The Perks of Being a Wallflower, Angels in America or essays like “American Things” by Tony Kushner, in which non-objective  “progressive” views of homosexuality are espoused, they should have an opportunity to study competing ideas.

Second, please provide quotes from Robert George and Ryan Anderson that are objectively “bigoted, hateful, vile, homophobic, appalling, offensive, uncivil, impolite, abusive” and “dangerous.” You shouldn’t from your biased position, unilaterally declare that your opinions are factual and serve as valid justification for censorship in public schools.

Third, your claim that “no responsible teacher, administrator, superintendent or school committee, conservative or liberal would ever subject any student to the hateful, vile attitudes and opinions of any one of those people….These comments are child abuse and have no place in a civil, polite environment of a school,” is not merely presumptuous, it’s un-American and dangerous. You have concluded that a certain set of propositions offends you and therefore you are censoring them, while at the same time promoting another set of propositions. That is pedagogically indefensible and threatens the essential principles of a truly free country. If you believe that students have no right to study the work of eminent scholars like Robert George and Ryan Anderson, then you have no right to expose them to the work of “progressives” who promote non-objective beliefs on arguably the single most controversial topic in America. You have no right to use public resources (i.e., public education) to act as an advocate for particular ontological, moral, and political views—views which, by the way, often align with and reflect liberal theological views.

This is yet another instance of “progressives” twisting language beyond recognition in order to ridicule those with whom they disagree into submission. What does the epithet “homophobe” really mean in “progressive” parlance? It means someone disagrees with your ontological and moral propositions. But name-calling is much more demagogically and, therefore, tactically effective. Name-calling obviates the need for rational, fair, free discourse and debate. Let’s just hope no one remembers that inconvenient “no name-calling” campaign sponsored by GLSEN.

In your English classes, do you introduce students to any resources (e.g., novels, plays, poems, essays, films, speakers, or newspaper articles) that espouse “progressive” views of homosexuality or gender confusion?

Your mission would appear to be global, to convince the world of your belief that homosexuality is immoral and that gay marriage is, too. While I will oppose you in in your endeavors, my more immediate focus is on protecting gay kids from the harm caused by homophobia and bigotry and supporting their dreams of a fulfilling life and, perhaps, marriage to someone they choose. I don’t believe that there are any reasonable, even rational points of view/beliefs that could convince a civil society to deny a gay child his/her promise of love, marriage and family. In fact it is nothing short of evil to me that any adult would seek to turn kids on kids let alone either overtly or intuitively deliver to them the message that they are immoral and should not expect a future of happiness. You will deny all this but, and again, we choose to disagree.

Have you, yet, accessed the GLADD site. There is so much there that all you need to do is check it out and you will know what I mean by vile, hateful expressions. Read up on your “scholars” and you will see what I mean. BTW, I do very much believe that many on that site are very fearful of gay people; the obsession with gays and their sexual expressions is just too bizarre and not at all a sign of good mental health. We fear that which we tend not to understand let alone know. And we fear the power they wield. This is why I, for one, don’t fear you, any religious organizations or others in your camp. The sheer desperation exhibited in the attempts by these individuals and groups to change public opinion is very revealing of a tremendously diminished power.

I am very comfortable with the state of affairs as regards gay people in society and the prospects for gay marriage. The It Gets Better Project is spot on, I think. While I think that we still must address those of you actively seeking to deny gays of respect and civil rights, we all know that a great movement of justice and equality is afoot. More and more, attempts to thwart the onward surge to equality are being seen by the populace as nuisance endeavors. Every day it seems another successful step on the road is achieved. California, just yesterday, New Zealand, England (and the Queen no less) two weeks ago. New Jersey in the courts, Hawaii, Oregon, Michigan and even your own state of Illinois are inevitable I think. I also think SCOTUS will eventually issue a nation-wide ruling on this in light of the ramifications of the end of DOMA section three and the subsequent federal benefits that apply.  I look forward to, in two weeks, starting another year with my high school kids and I anticipate some will, once again, call for our GSA to start up anew. They do it every year. We will have wonderful victories to celebrate including marriage in their own state.

You put “scholars” in quotation marks when referring to George and Anderson. There really is no debate about whether they are scholars or not. They are objectively scholars. Are you suggesting now that any scholar who holds and expresses moral propositions or legal opinions different from yours is not really a scholar? That seems as presumptuous as claiming you have the unilateral right to decide which viewpoints kids will be exposed to in public schools. Should conservative graduate students be permitted to write dissertations that articulate theses with which you disagree? Would their academic credentials be withheld if you disagree with their theses? How does academic freedom fit into your apparently narrow pedagogical vision that brooks no dissent?

I don’t know anyone who seeks to “turn kids on kids,” nor do I know anyone who tells kids that they “should not expect a future of happiness.” The future happiness of kids who experience same-sex attraction depends in part on which set of beliefs about homosexuality are true. If your beliefs are false— as I and others think they are—you are contributing to their future unhappiness. And I will repeat, you have no right to use public resources to promote your non-objective assumptions and censor those you don’t like.

That you would cite the It Gets Better project by Dan Savage who promotes the most perverse ideas (using the foulest, most uncivil language)and engages in the most malignant personal attacks on people undermines your claim to be motivated by a desire to protect students.

Coming Tomorrow: Part 5, the end of a dialogue that should incense taxpayers…

Your support of our work and ministry is always much needed and greatly appreciated. Your prayers for our staff, families and work are coveted.  Also, the promotion of our articles on Facebook, Twitter, your own email network is vital if we hope to spread the pro-family message.  And of course, your financial support is a huge part of our ability to be a strong voice for the here in the Land of Lincoln.