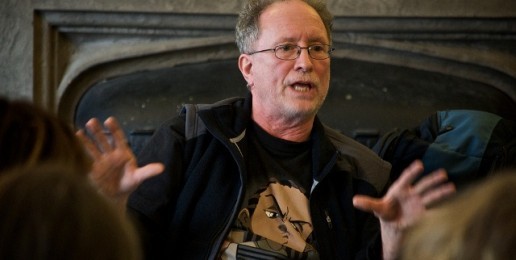 “Teachers should teach their subjects. They should not teach peace or war or freedom or obedience or diversity or uniformity or nationalism or antinationalism or any other agenda that might properly be taught by a political leader or a talk-show host”
(Stanley Fish http://chronicle.com/jobs/news/2003/01/2003012301c.htm).

I sincerely hope that the notoriety of former Weather Underground terrorist Bill Ayers that has been resurrected as a result of his affiliation with Barack Obama will result in a more critical look at the content of his “social justice” theories that undermine the legitimacy of public education.

Up until this past August, I worked at Deerfield High School (DHS) which is located in a suburb north of Chicago. For too many years the public has been unwittingly subsidizing the efforts of a small group of academic activists who arrogantly believe that their job description includes transforming the culture.

What is even more troubling is the direction in which they seek to transform the culture. Their socio-political vision comes straight out of Bill Ayers’ playbook. In fact, one of the preeminent social justice activists at Deerfield High School has signed the “Support Bill Ayers” petition.

Unfortunately, the presence of social justice advocacy is not a problem at just Deerfield High School. This cancer has metastasized throughout our nation’s public schools via our teacher-education programs, like the one at University of Illinois (Chicago) where Bill Ayers teaches.

If the innocuous term “social justice” referred to helping those in need who are incapable of helping themselves, then we should support it in both theory and practice. The problem is that the “social justice” movement in public education refers to a very particular set of beliefs that are anything but innocuous.

In regard to economics, it’s essentially repackaged socialism with its focus on income redistribution. Its other dominant features pertain to race, gender, class, and sexual orientation/sexual identity/ or sexual expression. Social justice theory encourages students to view the world through the divisive lens of identity politics that demarcates groups according to who are the “oppressors” and who are the “oppressed.” It has nothing to do with individual acts of actual persecution or oppression.

For example, as one of the social justice proponents at DHS has said nauseum, “If you’re white, male, and heterosexual, you are automatically an oppressor.” Apparently, he doesn’t notice that this is a prejudiced, racist, sexist, heterophobic stereotype.

There are a number of influential social justice “educators” (or grievance-mongers) whose names taxpayers would be wise to know: Paulo Freire, a Brazilian Marxist whose book, Pedagogy of the Oppressed has been hugely influential; Bill Ayers (Teaching for Social Justice); Asa Hilliard, bell hooks, Jane Elliot, Peggy McIntosh (SEED), and Glenn Singleton (Courageous Conversations).

In an Oct. 28, 2008 online Education Week article, “Election Renews Controversy Over Social-Justice Teaching,” writer Kathleen Kennedy Manzo writes that the fact that social justice teaching tends “to highlight the more unseemly details of U.S. history as well as the nation’s enduring problems, is what most disturbs critics of the movement.” One student I worked with on the writing center at DHS told me that at the end of her first semester in an American Studies class, she hated America and hated being white.

Despite claims made by Bill Ayers, social justice “educators” do not in practice demonstrate a commitment to intellectual inquiry. Ayers wrote on the blog “eduwonkette” that “in a democracy one would expect . . . commitment to free inquiry, questioning, and participation.” But social justice teachers rarely, if ever, introduce resources that challenge their own biased view of American history, their controversial theories on how to think about race, or their arguable, unproven theories about the nature and morality of homosexuality.

In a new book by well respected scholar Stanley Fish, Save the World on Your Own Time, he chastises educators who use the classroom for purposes for which they were not hired:

Teachers can also put students in possession of the analytical tools employed by up-to-date researchers in the field. But teachers cannot, except for a serendipity that by definition cannot be counted on, fashion moral character, or inculcate respect for others, or produce citizens of a certain temper. Or, rather, they cannot do these things unless they abandon the responsibilities that belong to them by contract in order to take up responsibilities that belong properly to others. But if they do that, they will be practicing without a license and in all likelihood doing a bad job at a job they shouldn’t be doing at all. When that happens–and unfortunately it does happen–everyone loses. The students lose because they’re not getting what they paid for (it will be said that they are getting more, but in fact they are getting less). The university loses because its resources have been appropriated for a nonacademic purpose.

He further argues that “Higher education loses . . . when teachers offer themselves as moralists, therapists, political counselors, and agents of global change.”

Taxpayers should do as I did: Send an email or letter to the superintendent, principal, assistant principal, library staff, and all department chairs of your public schools, urging them to purchase, read, study, and discuss this important book during staff development time. The exploitation of the classroom by “social justice” advocates who use our money to effect “social change” in the direction of their socio-political vision must stop now, and it won’t unless taxpayers speak up.

Fatuous “White Privilege Conference” This Week
b
a
x
r