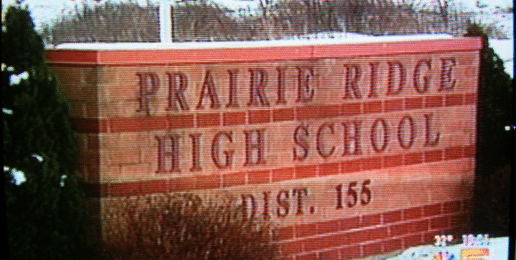 Caution: Article includes a graphic description of the “dance.”

I had hoped never to write about the “Vagina Dance” again, but in light of last week’s media coverage, the response of district administrators, a letter to the Northwest Herald from a Crystal Lake health teacher, and a troubling number of ugly emails and Facebook postings by Prairie Ridge students, it seems a follow-up article is in order.

First, District Spokesperson Jeff Puma was quoted in the Northwest Herald as saying, “There is no ‘Vagina Dance.'” I guess that depends on what one’s definition of “is no” is. Here is an excerpt from an email that Principal Humpa sent on Dec. 9, 2010 to the father involved. In it, Humpa refers to the purportedly non-existent “Vagina Dance” four times:

Mr. King:
…
In early November, we had a phone conversation regarding your concerns about the Vagina Dance activity in Health class. At the close of that conversation, I made a commitment to speak to Ms. Loeding, the PE department chairman, and Ms. Levin, your son’s Health teacher, about alternative strategies to teach the female reproductive system. That day, I spoke with both of these individuals about the potential demeaning nature of the Vagina Dance, especially in name, and the desire for alternative instructional strategies to be explored. Everyone was in agreement.

Later that week, you stopped by my office for an update. I shared with you the information detailed above. While I don’t recall the specific series of questions that you asked me, the essence of our conversation was that we would be seeking to discontinue the Vagina Dance activity. We would explore other options.

Let me further clarify my point of view. My request of Ms. Loeding and Ms. Levin was to investigate a variety of alternative instructional strategies to be used to present the female reproductive system in lieu of the Vagina Dance.

Shortly after the Northwest Herald article appeared, WGN-TV ran a story on the “Vagina Dance.” What’s interesting is that Mr. Puma couldn’t even bring himself to say the word “vagina.” He mentioned “fallopian tubes, ovaries and so on.”

Then a female student began to demonstrate the non-existent “Vagina Dance” that she too had learned in class. Visibly uncomfortable, the student stopped before even arriving at the uterus, let alone the vagina. In addition, she acknowledged feeling “awkward” in class.

Mr. Puma has claimed that the “Vagina Dance” is a nickname given to the dance by students and further claimed that my description of the dance was an “inaccurate misrepresentation,” so in an attempt to be accurate, I will describe it with laser-like precision:

Crystal Lake Health teacher Helene M. Duda wrote a troubling letter to the Northwest Herald in defense of the “Vagina Dance.” It was troubling for a number of reasons. First, she said that,

The “Vagina Dance” is a learning activity designed by Deb Tackmann…and is included as one of her activities in Glencoe’s “Hands On Health” textbook.

So, clearly “Vagina Dance” is not a nickname that students have given the “dance,” as school spokespersons stated on multiple occasions.Further, Duda said that the

“activity is simply a kinesthetic learning activity that is effective to help students remember the location and attributes of the reproductive system in a scientifically accurate manner.”

Really? Does Duda really believe that the activity detailed above teaches the location and attributes of the reproductive system in a “scientifically accurate manner”?

Then Duda expressed her view that

Those who deem the activity to ‘take away modesty and [be] disrespectful to women’ obviously have not seen the demonstration. The real disrespect to women here would be to not accurately educate young people about what and where these parts are and how they can be damaged by unprotected sex.”

Duda here implies that those who object to the “Vagina Dance” oppose the accurate teaching of female reproductive anatomy and the risks of unprotected sex. Where, pray tell, is her evidence for that peculiar claim? I was quite clear that it was the manner in which the material was presented that was the issue–not the content.

Finally, Duda refers to IFI as a “prejudiced religious group” that writes articles devoid of credible facts. I’m not sure what precisely she means by prejudiced, since she provides no evidence for that claim. And I don’t know what credible facts can be produced when making the case either that the “Vagina Dance” is inappropriate and may undermine modesty or that it’s appropriate and does not undermine modesty. Apparently, Duda’s belief about the appropriateness of the “dance” is a credible fact and IFI’s belief that it is inappropriate is a prejudice.

There are other aspects to the story that I omitted from last week’s article. The student who did not want to do the “Vagina Dance” asked Ms. Levin for permission not to participate. She told him that he had to do it and that it was required. The father contacted her to discuss his concerns, but she never responded. How do those responses reflect a respect for diverse views?

IFI has been told by Prairie Ridge students that not a single student has found this activity problematic, which I find not believable. But even if it were true, so what? With all due respect to teens, they do not and should not determine curricula for a number of reasons.

First, many teens lack both knowledge and wisdom; that’s why adults run schools.

Second, teens hate limits. No matter how inappropriate, obscene, or politically partisan a text or activity, if it’s challenged by concerned community members, incensed teens will react with unrighteous indignation and often with obscene emails and Facebook messages. IFI has had to spend considerable time removing obscene messages left on our Facebook page by Prairie Ridge students.

In addition to reading a boatload of obscenities and epithets, I learned some interesting things from Prairie Ridge students about their school. Apparently, unconventional mnemonic devices are a specialty among some teachers at Prairie Ridge. One student, self-identified as “Gomorrahmetal,” told me that his psychology teacher used a mnemonic device to help students remember “encoding, storage, retrieval.” That mnemonic device was “Everybody Shoots Rappers.” “Gomorrahmetal,” in a state of high dudgeon about my article, asked rhetorically, “Should we fire my Psych teacher for that violent reference?”

Another student shared that one of his teachers expresses his political opinions in class, particularly his ardent support of President Barack Obama. I don’t know what District 155’s policy is regarding teachers expressing their political views in class, but in many school districts such political advocacy is frowned on — in theory if not in practice.

School districts all over the country should be critically thinking about the kinds of comments teachers make; the resources they choose; the activities they lead; and the degree of commitment they have to honoring the diverse views of all families — even conservative families.

Policy should be established that strictly prohibits teachers from expressing their own political or moral views either directly through their classroom, comments, or the resources they choose. And these policies should be communicated clearly to teachers and enforced by administrators.

In addition, administrators and teachers should critically think about whether modesty is a value; whether teachers have any responsibility to cultivate it; and whether their language, resources, and activities may contribute in small or large ways to undermining it.

Is the “Vagina Dance” the most significant issue facing public schools? Of course not. Is it emblematic of the increasingly vulgar resources and activities that students are exposed to in public education? You betcha. It offers a glimpse into the kinds of curricular and supplementary resources that remain concealed from taxpayers behind schoolhouse doors. And the ensuing “misrepresentation” or dishonesty on the part of the District 155 administration reveals another troubling yet all too common problem in public schools.