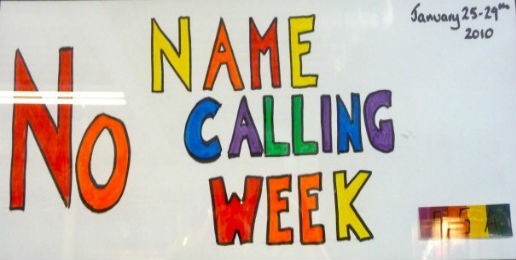 There are approximately 180 days in a typical school year, and it appears that homosexual activists and their ideological compatriots would like to spend part of each and every one on homosexual indoctrination.

Although, homosexual activists and their “allies” are inveterate propagandists, they aren’t stupid. They know they can’t come straight out and say, “Our learning objective is eradicate the belief that homosexual acts are immoral or to humiliate conservative kids into silence.” So, instead they exploit bullying and suicide to achieve that goal without ever telling taxpayers what moral mischief they’re up to.

This week is “No Name-Calling Week,” a devilish creation of — surprise surprise — GLSEN, that is being promoted by GLSEN and Barnes and Noble. Here are just a few of the activities they’ve concocted to “end bullying” (nudge nudge, wink wink):

Explain to students that they will hear a number of different scenarios read aloud one at a time, and that for each scenario they hear it will be their job to decide how they think they might act if they were the witness or bystander in the situation.

Scenario #3
Shelly brings her two dads to parent night to show them around her classroom and to meet her friends and teacher. The next day, Rachel turns to Masha and says she doesn’t want to be Shelly’s friend anymore because her family is “weird.” Shelly comes over to color with Rachel and Masha, and Rachel says “Eew, we don’t want any weirdos over here. Go sit somewhere else.” What can Masha do?

Scenario #5
Antonio and Sabine are good friends, and sit together every day on the bus to and from school. Shomi sometimes sits near them, but has stopped recently because a group of students who also ride the bus have started sitting behind Antonio and Sabine and throwing balls of paper and other garbage at them for the whole ride. Shomi also hears the group calling Antonio gay and saying Sabine must really be a boy because otherwise she would have friends who are girls. What can Shomi do?

Ask students to make themselves as comfortable as possible, and to find a position in which they can relax and close their eyes. You may want to clear space for students to lie down or dim the lights for this portion of the lesson.

By reading directly from the Bully-Free School Guided Fantasy supplement, lead students into a quiet visualization session in which they spend time picturing in detail the way a school without name-calling would look, sound, and feel. Read slowly and pause in between sections of the guided fantasy so that students really have time to make clear pictures in their heads that they will be asked later to flesh out more completely…

“I want you to find a comfortable position that you can stay in the whole time I am reading. When you are comfortable, I want you to close your eyes. Take a deep breath – breathe in, and now breathe out. Let your body begin to relax, and as you breathe deeply in and out, let all the noises around you fade into the background. We are going to use our imaginations to take a journey to a school. This school is a lot like our school, but it is special because in this school there is no name-calling and no bullying at all. I am going to help you walk through this school, but it is up to you to decide what this school looks and sounds like, and how it feels to be there. We’ll talk later about what you see, but for now, let’s start our trip…”

Read the poem below by a theatre troupe that uses it at performances about harassment and homophobia in schools. Think about and discuss the questions that follow.

Ask students to make themselves as comfortable as possible, and to find a position in which they can relax and close their eyes. You may want to clear space for students to lie down or dim the lights for this portion of the lesson.

By reading directly from the Bully-Free School Guided Fantasy supplement, lead students into a quiet visualization session in which they spend time picturing in detail the way a school without name-calling would look, sound, and feel. Read slowly and pause in between sections of the guided fantasy so that students really have time to make clear pictures in their heads that they will be asked later to flesh out more completely.

Have students break into groups of 4‐5 and distribute copies of the LGBT Terminology 101 handout to each group, ideally such that every student has a copy. Ask students to spend about five minutes reading and reviewing the terms in their group, and then have each group write down one or two questions they have about the terminology on a piece of paper.

Collect students’ questions, bring students back together as a large group, and read each question out loud (without revealing which group asked which question). Facilitate discussion of the questions, encouraging students as much as possible to answer each other’s questions. Emphasize that it is not wrong to not to know everything about another person’s identity, and that asking respectful questions is often the best (or only) way to find this information out.

Bisexual: A sexual orientation and/or identity of a person who is sexually, erotically and emotionally attracted to some males and some females.

Biological Sex or Sex: This can be considered our “packaging” and is determined by our chromosomes (such as XX or XY), our hormones (e.g., estrogen, progesterone, testosterone) and our internal and external genitalia (e.g., vulva, clitoris, vagina, ovaries, penis, testicles). Typically, we are assigned the sex of male or female at birth.

Coming Out: Declaring one’s identity, specifically, being lesbian, gay, bisexual or transgender, whether to a person in private or a group of people. To be “in the closet” means to hide one’s identity. Many LGBT people are “out” in some situations and “closeted” in others.

Gay: A sexual orientation and/or identity of a person who is sexually, erotically and emotionally attracted to some members of the same sex. Although gay can refer to both gay males and gay females, many gay females prefer the term “lesbian.”

Gender Expression: Refers to an individual’s physical characteristics, behaviors and presentation that are linked, traditionally, to either masculinity or femininity, such as: appearance, dress, mannerisms, speech patterns and social interactions.

Gender Identity: This is how we identify ourselves in terms of our gender. Identities may be: male, female, androgynous, bigender, transgender, genderqueer and others.

Homophobia: An irrational fear of, aversion to or discrimination against homosexuality or lesbian, gay and bisexual people.

Lesbian: A sexual orientation and/or identity of a person who is female‐identified and who is sexually, erotically and emotionally attracted to some other females.

Transgender: An identity of a person whose gender identity is not aligned with their sex assigned at birth and/or whose gender expression is non‐conforming.

Transphobia: An irrational fear and/or hatred of those who are perceived to break or blur societal norms regarding gender identity or gender expression. Usually directed at those who identify as transgender or defy stereotypical gender norms, regardless of their actual gender identity or sexual orientation.

No, Toto, we’re definitely not in Kansas any more.

These activities manipulate emotions while never exposing or critiquing the assumptions embedded within the activities. Some people may hold all of these assumptions to be true, but public school teachers have no right to teach them as if they are, indeed, factual, objective, or true.

All of the activities listed above are laden with embedded, unproven, non-factual assumptions that have no place in public education. For example, the “LGBT Terminology” handout teaches students that “heterosexism” is an attitude in favor of heterosexuality and in favor of the presumption that male/female relationships are the norm and superior. By identifying the traditional and common belief that only heterosexual behavior is moral sexual behavior with the pejorative term “heterosexism,” the handout teaches that it’s bad and wrong to believe that heterosexuality is the moral norm. It should outrage taxpayers that any public school teacher would teach other people’s children that conservative moral beliefs are wrong.

In addition, Orthodox Judaism, Islam, the Catholic Church and many Protestant denominations believe that heterosexuality is morally superior to homosexuality. The public should not tolerate publicly funded government employees teaching other people’s children even implicitly that their religious beliefs are erroneous or problematic.

If homosexuality and Gender Identity Disorder are discussed in public high schools, students should study resources written by the best scholars on both sides of the philosophical spectrum.

Schools should be prohibited from using the term “homophobia” in that homosexual activists use it to refer not just to name-calling and physical harassment but also to conservative beliefs on the nature and morality of homosexuality. In addition, high school teachers should be required to use the correct term for those who experience confusion about their gender: Gender Identity Disorder.

No public school teacher has the right to teach either implicitly or explicitly that homosexuality is normative or moral (or equivalent to race). Those are unproven beliefs–not facts. Hold your local public school educators to their commitments to honor all voices and to respect diversity. Conservative voices are entitled to be honored, and conservative beliefs are an integral part of a diverse community.

Educators also say they want parents to advocate for their children. Have the courage to be pro-active advocates for your children. If you have children in public schools, notify your children’s teacher/s immediately that under no circumstances are your children to be exposed to any resources, activities, or teacher commentary–including anti-bullying resources and activities–that address homosexuality or Gender Identity Disorder. Then ask them to confirm via email that they will honor your request.

Here’s one of the many truths that GLSEN doesn’t want you to know: You can oppose both name-calling and GLSEN’s propagandistic “No Name-Calling Week.”