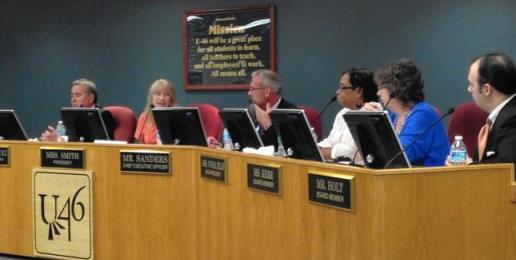 Tony Sanders, the chief executive officer of School District U-46 which serves 40,000 students in Cook, DuPage, and Kane Counties in Illinois, has declared that a middle school locker room is henceforth co-ed. He has declared from on high that a student who wishes to be the opposite sex may use whichever locker room his or her heart desires. Even more troubling, Sanders has further declared that no parents in the district may be apprised of the fact that their children may be sharing a locker room with an opposite-sex student. If it weren’t for one courageous school board member, Jeanette Ward, who alerted the community to this presumptuous decision on the part of the administration, parents would still be unaware of the practice that took effect on September, 6, 2016.

For example, such practices teach all students that feelings of modesty and the desire for privacy when engaged in intimate bodily activities have no necessary connection to biological sex. Co-ed restrooms and locker rooms teach all students that subjective feelings about one’s sex take precedence over biological sex in even the most private spaces. Such practices teach all students that in order to be compassionate and inclusive, they must share restrooms and locker rooms with persons of the opposite sex. Attorney General Loretta Lynch has, in effect, told girls the truly wicked lie that their desire not to share restrooms and locker rooms with boys is tantamount to the refusal of white racists to share restrooms with blacks. While many parents teach their sons and daughters that they should leave a restroom or locker room if an opposite-sex student enters, schools now teach them that leaving would be hateful and bigoted.

While the vast majority of transgender students in our schools prefer to change in private, the needs of each student is addressed on a case by case basis.

State and federal statutes prohibit districts from releasing information about any student without parent permission. If we provide information regarding a student that would lead to the identification of the student without parental permission, we would be in violation of the Family Educational Rights and Privacy Act and the Illinois Student Records Act. As such, administration will not share with a school community if a transgender student is utilizing the locker room of his or her choice.

Any student who does not feel safe in a locker room or a restroom should immediately contact the school principal. Schools can then work to address any concerns and, if appropriate, find an alternative location to address privacy or safety concerns.

Sanders must be kidding. He’s exploiting the Family Educational Rights and Privacy Act (FERPA) and the Illinois Student Records Act to rationalize not telling parents that their children’s privacy will be invaded by an opposite-sex student? If these laws, which were passed in part to give “parents the right to have some control over the disclosure of personally identifiable information from their education records,” are now used or abused to allow school administrators to prevent telling parents that their children will be sharing restrooms or locker rooms with opposite-sex students, then the laws need to change. School administrators can make parents aware of the decision to allow co-ed restrooms and locker rooms without giving student names. Withholding a general notification about the end of sex-segregated restrooms and locker rooms violates the rights of other students and their parents.

Here are a list of questions that should be posed to your favorite teachers, school board members, and administrators:

If you can get your school leaders to respond, their answers will likely reveal several things. (And don’t let them get away with responding to any of the hypothetical scenarios posed above with the all too common responses of “That will never happen,” or “That’s different.”)

First, their answers will likely reveal that our public school leaders have not thought about the ramifications of the ideas embedded in the practices and policies they are already implementing.

Second, their answers will likely reveal the inherently contradictory nature of the leftist ideas they are implementing.

Third, these leaders will likely reveal that they do, in fact, believe that objective, immutable biological sex per se has meaning: Biological sex is the source of feelings of modesty and the desire for privacy.

Opposition to co-ed restrooms, locker rooms, and showers in public schools has little to do with the risk of sexual assault by boys who “identify” as girls (or claim to), though that risk increases in middle school and high school. Opposition to such subversive practices stems from the abandonment of any recognition of and respect for the deep meaning of objective biological sex. Leftists are persuading or coercing public schools to treat subjective, disordered feelings about biological sex as if they are of greater importance than objective, immutable sex.

One of the many troubling lessons I learned from working in a well-respected public high school (Deerfield High School) for a decade and sending four children through public school is that few public school teachers, administrators, and school board members are deep thinkers. That is not to say they’re not intelligent. Rather, they rarely think critically about their own assumptions or about the logical outworking of ideas. In fact, many become become downright angry if pressed to think deeply about ideas—particularly ideas that challenge their usually unchallenged dogma.

Another critical issue that I hope becomes evident by thinking through these questions is where the chuckleheaded ideas, practices, and policies—which are embraced by foolish administrators, teachers, school board members, and parents or tolerated by cowardly administrators, teachers, school board members, and parents—will lead. They will lead to unrestricted co-ed restrooms, locker rooms, and showers everywhere. Eventually, there will be no more privacy curtains in locker rooms, no more separate showers, no more accommodations of just a few gender-dysphoric students.

Those who prefer not to rock boats—including even the pirate ships that are carrying away their children—will assuage their prickly consciences by repeating the empty mantras “Oh well, it’s just a few confused children,” or “Oh well, they’re  taking cross-sex hormones and are going to have surgery, so they’ll look like the sex they’re pretending to be.” What these cowardly boat-steadiers don’t realize is that “transactivists” and their political enablers like Barack Obama don’t think “transgender” persons need to cross-dress, take cross-sex hormones, or have surgery (By the way, having “top” or “bottom” surgery does not transform women into men or vice versa). In the doctrinaire leftist cosmos, a “trans” person doesn’t have to feel distress about their biological sex. All that’s needed for a person to be “trans” is his or her claim that he or she feels like the opposite sex (or both sexes or neither sex)—today.

The logic of leftist arguments necessarily leads to the end of sex-segregation everywhere. Don’t dismiss these changes in practices or policies as trivial or as affecting only a few students. These changes affect all students, and they are profound. In fact, these changes are the portents of the most radical cultural revolution in modern history.

Have you had a chance to checkout the latest special feature we are calling “Laurie’s Chinwags?” For the past few weeks, we’ve been adding audio recordings (aka podcasts) to articles written by Laurie. We hope this new feature will serve the needs and desires of IFI subscribers. We would appreciate any constructive feedback.