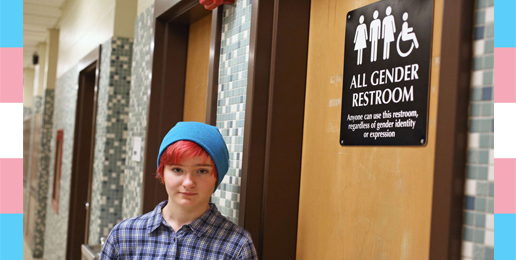 According to ABC News, Alonso “said courts have ‘correctly recognized’ that ‘federal protections against sex discrimination are substantially broader than based only on genitalia or chromosome.’”

What he’s saying is that laws pertaining to “sex” actually have no necessary connection to sex.

Alonso went on to cite Judge Ann Claire Williams of the 7th Circuit Court of Appeals who said this about a case in Wisconsin in which a teenage girl who masquerades as a boy fought successfully to use the boys’ restrooms:

A transgender student’s presence in the restroom provides no more of a risk to other students’ privacy rights than the presence of an overly curious student of the same biological sex who decides to sneak glances at his or her classmates performing bodily functions.

Ubiquitous attorney John Knight, director of the ACLU of Illinois’ LGBT and HIV Project, made this egregiously dishonest statement:

‘Throughout this litigation, one thing remains clear: The groups who filed this case remain unable to demonstrate any harm to their clients resulting from sharing restrooms and locker rooms with students who they perceive as different,’… adding that judge ‘confirmed there is no constitutional right to refuse to share a restroom or locker room with students because they are transgender.’

Second, no student has refused to share restrooms or locker rooms with students “because they are transgender.” Some objectively female students object to sharing restrooms and locker rooms with students because of their objective, immutable male biological sex. Knight knows that. He also knows—as do the two male students who have sued the district—that the sex of humans can never change.

Third, objectively male persons have no constitutional right to use restrooms and locker rooms designated for persons of the opposite sex.

Fourth, Knight failed to define “harm.” Many would argue that children and teens are harmed by teaching them through such restroom/locker room practices that biological sex has no intrinsic meaning relative to modesty and privacy.

They are harmed when the government through such radical practices desensitizes students to engaging in private activities like going to the bathroom, changing clothes, or showering in close proximity to unrelated persons of the opposite sex.

They are harmed by practices that teach them that their good and natural feelings of reluctance to share private spaces with opposite-sex students constitute ignorant, hateful bigotry.

And they are harmed when ignorant school administrators, board members, and activists like Knight implicitly teach a form of dualism, which holds that the human person is composed of body and mind–which in their view are severable–with the material body subordinate to the workings of the mind.

The harm done is spiritual, intellectual, emotional, psychological, and moral. The harm is no less real and serious even though it may not be measurable or demonstrable.

Vicki Wilson, one of the parents in the group suing District 211, expresses concern for all students, including those who don’t want to share private spaces with opposite-sex students:

This practice is happening all over Illinois and children are fearful of being labeled if they say anything since administrators have intimidated them into ignoring their own needs for basic privacy and dignity…. All children need to be considered and there is a very simple solution that many school IL board members are refusing to even consider: provide a changing space outside either the girls or the boys locker rooms for children who request it. 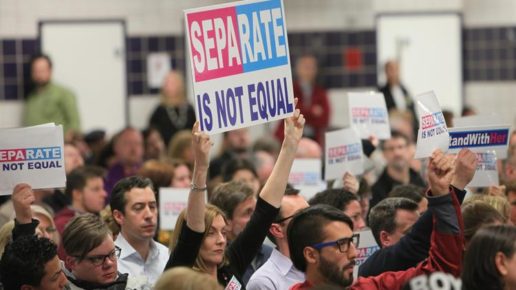 Either objective, immutable biological sex has intrinsic and profound meaning or it doesn’t. If it has intrinsic and profound meaning, then what District 211 is doing is pernicious. If, on the other hand, physical embodiment as male or female has no meaning, there remains no reason to maintain any sex-segregated spaces for anyone anywhere. If biological sex has no meaning relative to modesty and private spaces, then there is no reason to allow only “trans”-identifying boys in girls’ private spaces. Schools should permit “cisgender” (i.e., normal) boys in girls’ spaces as well. And if biological sex has no meaning, then co-ed private spaces should have no restrictions. After all, in the mixed up, muddled up, shook up world of “progressives,” wouldn’t separate showers for boys and girls be inherently unequal?

Lying seems to come naturally to Knight. He said this about the District 211 student (since graduated) that the ACLU of Illinois represented in 2015:

“What our client wants is not hard to understand. She wants to be accepted for who she is and to be treated with dignity and respect – like any other student.”

The student to whom Knight was referring was not asking to be accepted for “who she is.” The student was asking that others accept him as something he is not and never can be: a girl. He wants the whole world to pretend along with him. But there is no dignity in lies. Facilitating his disordered desires and delusional beliefs would represent an act of disrespect. School administrators, board members, and activists like Knight have put on a veneer of love, but it’s not real love. It’s an empty, fake, sickening, saccharine pseudo-love that enables them to feel good while doing evil. Real love is built on a foundation of truth.