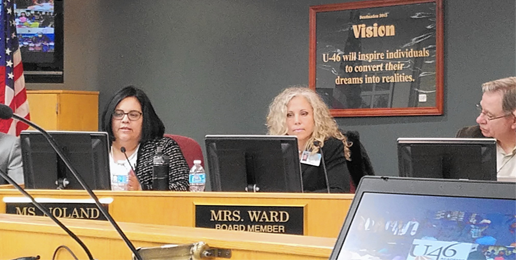 School District U46 (Elgin, Illinois) School Board Member Jeanette Ward offers a profile in courage, grace, and wisdom, while fellow board members Veronica Noland and Melissa Owens offer profiles in hypocrisy and ignorance. Their hypocrisy and ignorance were revealed during a recent school board meeting discussion about proposed changes to the “Student Code of Conduct.”

In 2013, the board voted to add the terms “sexual orientation,” “gender identity” and “gender-related identity or expression” to the section of school board policy on bullying and harassment. Those are the only conditions constituted by subjective, internal feelings and volitional behavior to be specifically identified. Since board policy then concludes with the inclusion of “any other distinguishing characteristic,” there exists no necessity for naming any characteristic, let alone ones constituted by subjective feelings and volitional behavior.

But bad became worse this past Monday night when the board voted to add this language from board policy to the “Student Code of Conduct,” which all parents must sign in order to enroll their children in District U46. Prior to the 5-2 vote, with Phil Costello joining Ward in opposing the change, Ward asked if, under the policy change, students would be guilty of bullying if they refused to use the “pronoun preference for a gender dysphoric student.”

She offered this commonsense and compassionate explanation for her opposition to punishing students for refusal to lie in the service of a science-denying ideology:

I don’t think it helps the student who is struggling with this issue to help them in their denial of reality. And I don’t view that as a form of bullying. I think to join them in what is not real, in the real world, only hurts them.

Hoo boy, the leftist ideologues on the school board did not tolerate well her dissent from their dogma.

I have to say something. Using the terms “gender dysphoric” and making the statements that you make hurt the students of this district. They go against what the accepted practices from major major organizations in this country… the American Academy of Pediatrics… I could bring out my list of references from a year and a half ago… but I will strongly strongly condemn your terms that you use and the language that you use in hurting the students of this district. I think it’s an ideology of yours, and it’s a minority in this district and a minority in this country. It goes against our policies that we have voted on. It goes against against so many things. You can continue to use this as a political platform of your own because you have that right, but I will vociferously object to the comments and the terms that you use for our students.

When Noland suggests students are “hurt” by the term “gender dysphoric”—a term which is not a pejorative and is used commonly in the mental health community—what does she mean? Does she mean students who seek to pass as the sex they are not don’t like the term? If so, how does her strong, strong condemnation of and vociferous objection to Ward’s beliefs make students in the district who share those beliefs feel? Might they be hurt by Noland’s words?

Noland cites—again—the American Academy of Pediatrics’ endorsement of “trans”-affirmative experimental protocols without mentioning that all anyone really knows is that a small committee of leftist members of the AAP created this policy, which an even smaller group then voted on. The rest of the thousands of members of the AAP had no input or vote on the policy. In fact, most didn’t know about it until the public learned about it.

Noland believes that Ward’s “ideology” is shared by only a minority in the district and country. To which of Ward’s positions specifically is Noland referring? Does Noland believe most people in the country oppose the use of the term “gender dysphoric”? Does she believe most people in the country want students punished for refusing to use incorrect pronouns? If so, perhaps at the next board meeting, she can provide conclusive, research-based evidence for her claims.

Further, is Noland—who is apparently a true-blue “progressive”—arguing that minority groups should be denied a voice? The hypocrisies just keep piling up. Commitments to tolerance, diversity, and minority voices gone in slavish servitude to the disordered, doctrinaire sexuality ideology of the left.

Then board member Melissa Owens made clear the Orwellian, anti-First Amendment—even fascist—nature of this policy (fascism: “A political philosophy characterized by authoritarian views and a strong central government—and no tolerance for opposing opinions; tendency toward or actual exercise of strong autocratic or dictatorial control”):

If sitting at a table in a position of power and saying that our students don’t live in reality, if that’s not bullying, I don’t know what bullying is to be quite honest with you.

Well, I would argue that if sitting at a table in a position of power and saying that students must speak lies or risk being disciplined for bullying is not bullying, I don’t know what bullying is—to be quite honest.

Objectively male students who claim to be girls are denying the reality of their sex. Stating that objective truth no more constitutes bullying than does saying that Rachel Dolezal denied reality when she claimed to be African American.

Throughout multiple board meetings in which Jeanette Ward has repeatedly contended for the truth, enduring uncivil and open hostility from arrogant colleagues and community members, Ward has demonstrated courage, grace, wisdom, restraint, and humility. In addition, with grace, she weathers despicable attacks on her school board Facebook page from people like “Sex Positive Parent/Sex Education Teacher” Kim Cavill, who earlier this week called Ward the “High Priestess of the Order of Moron” (nice role model for kids).

At birth, doctors do not assign or designate “genders” (as redefined by “progressives”). Rather, doctors identify the sex of babies, which is virtually always correct except in the very rare cases of babies born with Disorders of Sexual Development (i.e., intersex disorders, which are wholly irrelevant to discussions of the “trans” ideology). “Gender” (as redefined by “progressives”) denotes the arbitrary socially constructed behaviors, conventions, and expectations associated with maleness or femaleness. It’s beyond silly to claim that at babies’ births, obstetricians assign to them arbitrary socially constructed behaviors, conventions, and expectations. Obstetricians identify the sex of babies, and the sex of humans can never change. Pronouns denote and correspond to biological sex.

No administrator, faculty member, staff member, or student should be compelled by Big Brother to lie by being forced to use incorrect pronouns when referring to someone who masquerades as the sex they are not. Punishing students—or staff—for resisting mandatory speech codes is institutional bullying at its worst. The government has no right to compel speech—let alone deceitful speech. For an arm of the government—which is what schools are—to require employees or students to lie is a frightening exercise of tyrannical power.

Thank you to Jeanette Ward for standing bravely and almost alone for truth in the District U46.

Is This the Worst School Board in Illinois?
b
a
x
r