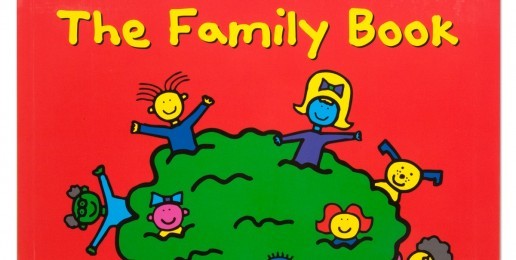 There’s a remarkable news story coming out of Erie, Illinois. A wise and courageous school board has voted to remove a homosexuality-affirming picture book titled The Family Book from its elementary school library. Further, it has voted to remove all materials created by the Gay, Lesbian and Straight Education Network (GLSEN), a partisan advocacy group committed to using public schools, including elementary schools, to advance their moral, political, and ontological beliefs.

The Family Book was written by homosexual author Todd Parr and recommended by GLSEN. The “Alternatives to Marriage Project” highly recommends The Family Book for managing “both to naturalize and celebrate family diversity” and describes it as a favorite “among the toddler set.” “Naturalize” seems an ironic choice of words to describe a book that includes types of “parental” relationships that are unnatural and, by design, sterile. The “Alternatives to Marriage Project”  is a group committed to “equality and fairness” for “same sex couples and those in relationships of more than two people.”

Treating homosexuality and heterosexuality as equivalent is not a neutral position

Humans were quite obviously created anatomically and biologically as heterosexual beings. Using any objective criteria, all humans are heterosexual.  There exists no argument about the morality of heterosexual acts per se, so the number of books in a library that depict heterosexuality positively is irrelevant to any discussion of the appropriateness of including a book that depicts homosexuality positively. Publicly funded schools have no right to make available to young children ideas and images that many believe are profoundly immoral.

The use of the terms “book banning” and “censorship” represents yet another “tool” in the bulging toolbox of manipulative and hypocritical strategies used by those who have lost their moral compasses and seek to pervert the moral compasses of other people’s children in public schools. Teachers make choices all the time about what books should be purchased with limited resources. And particularly in elementary schools, the criteria used to determine book choices include considerations of age-appropriateness. Although leftwing extremists may think picture books that affirm homosexual family structures are appropriate, they, leftist ideologues, are not the ultimate arbiters of appropriateness.

Charges of censorship are leveled at only conservatives. When, for example, high school teachers refuse to have their students study any resources on the topic of homosexuality written by conservative scholars while at the same time having them read novels, plays, or articles that espouse liberal ideas, we rarely if ever hear them called censors.

I’m speculating here, but I doubt whether any school district that chose not to purchase a picture book that positively depicted polyamorous families or families in which the parents were siblings would be accused of book banning or censorship.

Are picture books that address homosexuality centrally about love?

The problem with picture books on the subject of homosexuality is that they ignore — as they must — the central issue: the morality of homosexual acts. That’s what makes this debate about picture books so dishonest and so dishonorable: In picture books for young children, leftists can’t address the fundamental and abstract question of sexual morality, and, therefore, they get away with saying with feigned wide-eyed innocence, “But this book is just about love.” No, it’s not, and they know it.

The Family Book vividly captures the emotive dimensions of families in colorful, whimsical, and appealing illustrations, which makes it all the more troubling. Books like Parr’s lure little ones into an ideological snare before they’re old enough to realize it. It doesn’t matter that Parr in his moral ignorance thinks he’s doing a good thing. His good intentions, shaped as they are by moral delusion, do not mitigate the offense of presenting perversion as positive. Adding sugar to poison doesn’t make it less toxic; it makes it more likely to be consumed.

Should minor positive references to homosexuality get a pass?

And the fact that in his book, the positive images of homosexual families are few, doesn’t justify the inclusion of this book in a public elementary school library. Should libraries include picture books with just one or two positive references to polyamorous families? As I have written earlier, cultural change rarely happens through dramatic, single events, but rather through the slow, accretion of little events that we ignore or dismiss as minor. All that pro-homosexual dogmatists have to do to get their resources into public schools is make sure their references to homosexuality are few and indirect. Once in, they gradually increase the number and directness of homosexuality-affirming messages.

Of course, homosexual activists are dragging in the bullying issue again as a means to intimidate the Erie administration and school board. They’re making the case that choosing not to include resources that affirm homosexuality will contribute to bullying of students who identify as homosexual or whose caretakers are homosexual.

Is it the responsibility of elementary schools to affirm every family structure or sexual phenomenon?

It’s important is to understand that the mere fact that a particular family structure (or sexual phenomenon) exists does not mean public schools are compelled to teach about or affirm it. It’s tragic that selfish adults deliberately create motherless or fatherless family structures, but schools have neither the obligation nor the right to affirm those immoral structures even in order to make children feel better.

Some questions for this homosexual activist teacher:

GLSEN is quoted as saying that they are “’reaching out’” to the Erie Community Unit School District to “’understand their decision to reject the unanimous decision of a community-based committee in favor of the adoption’” of GLSEN’s Ready, Set, Respect! curricula about which IFI has written.

I wonder who served on this community-based committee. How many people served on it? How were they selected? Did those who formed the committee ensure that all ideological views on homosexuality and its presence in elementary school curricula were represented? How many character development curricula were reviewed? What criteria were used in the selection process? Who established the criteria? Did all members of the committee read all the curricular resources? Did they investigate the biases and controversial history of GLSEN, including that of its founder, Kevin Jennings?

These are some of the questions that should be asked in order to hold accountable those who made the boneheaded decision to use GLSEN resources.

This news story shouldn’t be remarkable, but because we see so few public school administrations and teachers with the wisdom and spine to oppose the efforts of homosexual activists to impose their beliefs on public schools — or infuse curricula with their beliefs — the courage of the Erie Community Unit School District stands out.

Take ACTION:  Click HERE to offer words of encouragement and support to the School Board President Charles Brown and Superintendent Bradley Cox, who you can bet your bottom dollar will be on the receiving end of vicious attacks from the advocates of “tolerance.”