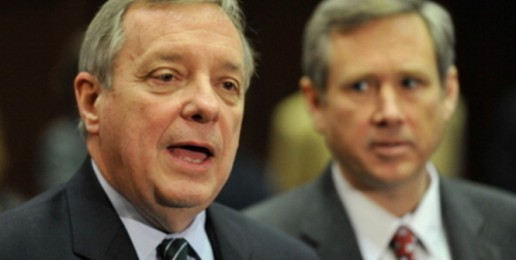 Liberal lawmakers in cahoots with homosexual activists and the Obama Administration will not rest until they’ve perverted every significant cultural institution in ways that will hasten America’s decline.

Pro-homosexual “agents of change” masquerading as “educators” have usurped government schools through curricula and deceitful anti-bullying programs. Pro-homosexual activists have set in motion radical changes in the military through the repeal of Don’t Ask, Don’t Tell. And now pro-homosexual activists are going after marriage through the oxymoronically titled “Respect for Marriage Act” (ROMA), which, if passed, would overturn the “Defense of Marriage Act” (DOMA).

On November 10th, the U.S. Senate Judiciary Committee voted along party lines to advance ROMA (S. 598) to the full Senate. Illinois’ senior U.S. Senator, Dick Durbin, is a co-sponsor of this anti-marriage legislation. In the U.S. Senate, however, Democrats are expected to have a more difficult task mustering the votes to overcome an expected Republican filibuster.  Illinois’ junior U.S. Senator, Mark Kirk, will be a critical vote in maintaining a filibuster. Serious questions about Kirk’s commitment to conservative values continue to abound. The ROMA vote will be a key opportunity for Kirk to reassure Illinois conservatives that he stands squarely for natural marriage.

The assault on marriage is virtually relentless. Currently, there are no fewer than 11 challenges to the federal marriage law in the U.S. court system, and now liberals in the U.S. Senate are seeking the repeal of DOMA in order to compel the federal government to recognize same-sex “marriage.”

Furthermore, if DOMA is repealed, all 50 states would have to recognize homosexual “marriages” from other states, essentially making this counterfeit form of marriage the law of the land.

Despite what homosexual activists and foolish legislators claim, marriage is not solely a private institution concerned with the subjective feelings of those seeking to marry. Marriage — as a government-recognized institution — is a public institution that affects the public good. Government does not create marriage. It merely recognizes a type of relationship that exists and serves the public good. That type of relationship is a sexually complementary relationship between one man and one woman that may result in children. It would be no more legitimate for the government to jettison the criterion of sexual complementarity than it would be for the government to jettison the criterion of numbers of partners by legalizing plural marriage.

The cowardice and ignorance of conservative Americans, including our lawmakers, on virtually every issue related to homosexuality have facilitated the usurpation of public education and the military for the pernicious purpose of normalizing homosexuality. And these successes have emboldened an already arrogant homosexual movement that has turned its anarchic efforts toward radically redefining marriage. With a Democrat-controlled U.S. Senate, their chances for success are better than they’ve ever been.

Let’s hope and pray that there are enough conservatives with wisdom and spines of steel to prevent homosexual activists and their ideological allies from winning another corrosive victory, this time in the U.S. Senate.