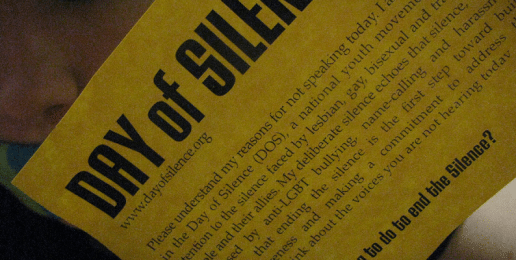 On Wednesday morning, IFI received an email from a gentleman in Stockton, California, who is angry at our national effort to encourage parents to keep their children home from school on the Day of Silence if their school permits students to refuse to speak during instructional time.

He made accusations that I believe warrant a response. I also believe that the email exchange warrants publication, so that others are not confused if they should encounter similar criticisms.

Below is his email followed by my response:

Your use of the ACLU source is horrendously flawed. While you are quick to use the quote that “You DO have a right to participate in Day of Silence and other expressions of your opinion at a public school during non-instructional time: the breaks between classes, before and after the school day, lunchtime, and any other free times during your day.”

You completely ignore the next lines that add that “If you want to stay quiet during class on Day of Silence, we recommend that you talk with your teachers ahead of time, tell them that you plan to participate in Day of Silence and why it’s important to you, and ask them if it would be okay for you to communicate in class on that day in writing. Most teachers will probably say yes.”

While that omission can at least be justified, the next omission cannot. The very site that you base your argument for walking out on the DOS clearly states that:

Your site is blatantly misrepresenting the ACLU’s statements and giving incorrect advice to parents. By taking their students out of class parents are going beyond their rights (unless you claim that you have a better understanding of civil rights than the ACLU Lawyers). You are endangering the education and well-being of the students are parents who are trusting your advice. By taking their students out of class they are not covered by speech, and can be penalized. Quite frankly, I am horrified at the reckless and shortsighted disregard your organization is showing for the very people you are supposed to be helping.

Our goal is to correct the false idea many administrators, teachers, students, and parents have which is that students have a legal right to refuse to speak in class.

You are incensed that we omitted this:

We are not asking parents to keep their children home from school “just because we don’t like what Day of Silence participants are saying” and certainly not because of what they’re “thinking” (frankly, that statement from the ACLU blogger is just a silly statement). We don’t object to Day of Silence participants saying what they want during non-instructional time or thinking what they want anytime.

I find it ironic that you charge us with “endangering education.” GLSEN has for years encouraged students to use instructional time to engage in political action and when we respond, we’re accused of “endangering education.” You seem to think that sound education entails passive acquiescence to GLSEN’s exploitation of public schools. The reality is that the very integrity and legitimacy of public education is jeopardized by partisan political action in the classroom and by the curricular censorship of all resources that dissent from GLSEN’s ontological and moral assumptions about homosexuality and from GLSEN’s socio-political goals.

Additionally, you have charged us with “endangering the well-being of students and their parents” by urging them to remove their children from school when administrations permit political action during instructional time. We, however, believe that the well-being of students and parents is compromised by the presence of homosexuality-affirming political action in the classroom.

Finally, I find it odd that you would be “horrified” by our efforts to resist political action during instructional time. Civil disobedience in the service of truth and fairness has a long and well-respected history in America. For years, parents have tried communicating rationally with their administrations about GLSEN’s intrusion into instructional time–all to no avail. The oppressive intellectual and political chokehold that subversive, partisan, anti-educational organizations like GLSEN have on public schools has made civil disobedience necessary.

One final comment: If the ACLU has taken the time to comment on parents keeping their children home from school on the Day of Silence, the Walkout must be having an effect.

Laurie Higgins
Laurie Higgins was the Illinois Family Institute’s Cultural Affairs Writer from the fall of 2008 to early 2023. Prior to working for the IFI, Laurie worked full-time for eight years...
Full bio and more from Laurie Higgins
b
a
x
r