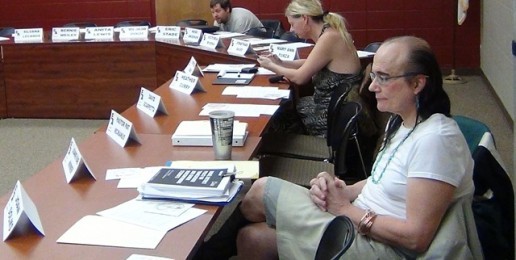 On Thursday, Nov. 29, at the second meeting of the East Aurora High School ad hoc committee formed to revisit the possibility of establishing policy regarding students who experience gender confusion, over 120 people showed up, including approximately 10 pastors and 15 chaplains.

Most of these community members were Hispanic as were the faith leaders who serve the Aurora community. Almost all of the 120 people opposed such policy. Over 20 people, including a high school student, voiced their opposition to any policy that would permit boys and girls to use the restrooms and locker rooms designated for those of the opposite sex. And they expressed their views with unapologetic, unself-conscious, bold, and impassioned conviction, often with the help of a translator.

In contrast to their respectful tone, the two attendees who spoke in support of such policy—neither of whom live in Aurora and one of whom identifies as “transsexual”—were by multiple accounts condescending and rude.

After the meeting, one of the gender-confused non-community members who serves on the ad hoc committee sent the following offensive email to the entire committee, which he also asked to be shared with the school board. This disturbing email alone should suffice to disqualify him from serving on any school committee (emphasis added):

One of the nice things about being in business for myself is that I enjoy the freedom to speak my mind without fear of having my employment terminated or other negative repercussions. I was invited to serve on the Ad Hoc Committee and have every intention of continuing to do so. But I cannot go through an experience like last Thursday night’s meeting without saying what I need to say about it. I didn’t speak up at the meeting only because I understand and respect Robert’s Rules of Order and the process by which governmental and quasi-governmental bodies operate.

Never have I seen so many people gathered in one place so determined to display their own ignorance, bigotry, and mean-spiritedness. I should not have been surprised because the protest was organized by the Illinois Family Institute, which has been certified as a hate group by the Southern Poverty Law Center. The Beacon News had a photograph of David Norck of the Illinois Family Institute assisting the protestors. It would be like having the Ku Klux Klan come to a meeting of a committee whose work was to craft a policy for racial integration.

I was disappointed not to have had an opportunity to speak out at the meeting, and to have to listen to ninety minutes of transphobic diatribes.

We cannot let a certified hate group prevent the Ad Hoc Committee from having its dialogue, proposing policy, and taking a vote. We don’t have mob rule; we have a democracy. And while the First Amendment certainly protects every one, including bigots (the U.S. Supreme Court allowed the American Nazi Party to march in Skokie), reasonable time, place, and manner restrictions may be imposed on the right of public comment so that government bodies and quasi-government bodies can do the work that they are charged to do. It is my suggestion that we, as a Committee, or the School Board, itself, adopt reasonable time, place, and manner restrictions on public comment so that the Committee can do its work.

This letter will be an open letter which I post on my blog.

This remarkable letter calls for some remarks:

The kind of radical sexuality activism that East Aurora High School has encountered will come to every elementary, middle, and high school in the country. Let’s hope that every community has men and women as courageous as the men and women in Aurora—including faith leaders. Right now the picture looks bleak on the courage front, but maybe the actions of these Aurora community members will inspire others to follow their lead.