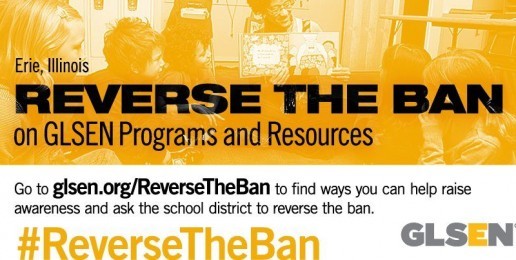 The Alliance Defense Fund has delivered a legal memo to the Erie Community Unit School District supporting its decision to discontinue the use of curriculum produced by the Gay, Lesbian, Straight Education Network for elementary school students.  (Read more HERE.)
“Public schools should not be coerced by groups who want to indoctrinate children into supporting homosexual behavior by exposing them to inappropriate material,” said ADF Legal Counsel Jeremy Tedesco. “Schools are supposed to serve as institutions of learning, not propaganda. The school board was right to listen to parents’ concerns and abandon the GLSEN materials.”
At the beginning of the 2011-2012 school year, the school district’s Materials Review Committee approved the use of GLSEN’s “Ready, Set, Respect!,” a curriculum program that promotes homosexual behavior. After reading one of the books in the curriculum, several parents voiced their concerns about the materials. In May, the board voted 5-2 to cease using GLSEN materials for elementary school students after determining that the materials do not reflect the community’s values and are inappropriate for use in elementary schools.  (Read more about GLSEN’s pro-homosexual curriculum program HERE.)
In response, GLSEN launched a national campaign, falsely accusing the school board of banning books, in an effort to intimidate the school board to reinstate the pro-homosexual curriculum. Despite GLSEN’s outcry against the decision, the board boldly reaffirmed its position last week.
“Teaching diversity, tolerance, and anti-bullying to elementary schools was always done before without using GLSEN materials,” Superintendent Bradley Cox told the media.
“This is an effort by GLSEN to indoctrinate children with its radical pro-homosexual agenda, trampling parental rights in the process,” the ADF memo states. “The Erie School Board is simply exercising its constitutional authority to manage the affairs of its schools, including the selection of curriculum.”
Jeremy Ramsey, one of more than 2,100 attorneys in the ADF alliance, also contributed to the legal memo and communicated with board members about it at a public meeting Monday.
ADF is a legal alliance of Christian attorneys and like-minded organizations defending the right of people to freely live out their faith. Launched in 1994, ADF employs a unique combination of strategy, training, funding, and litigation to protect and preserve religious liberty, the sanctity of life, marriage, and the family.