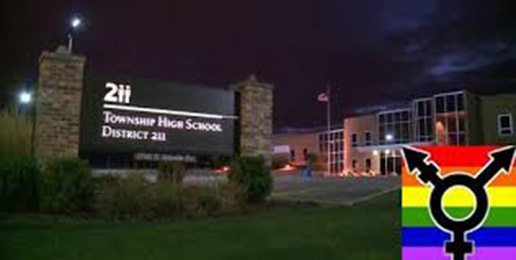 Following a public spat between the Office for Civil Rights (OCR) and the District 211 Board of Education over their tentative agreement regarding locker room use by a gender-dysphoric boy, the district has decided to move forward with the agreement. The district already allows gender-dysphoric students to use opposite-sex restrooms, and now they will allow this boy to use curtained, private changing spaces within the girls’ locker rooms.

The dispute arose when the OCR and ACLU, who is representing the boy in his lawsuit against the district, publicly stated that the agreement applied to any gender-dysphoric students in District 211 and that the agreement gives the boy at the center of the controversy the option of using the private changing areas created for him within the girls’ locker room, but that he was not required to do so. The district refuted both claims and demanded a retraction from the OCR who initially refused.

Shortly before an emergency school board meeting on Monday night to reconsider the proposed agreement, the OCR blinked, stating that the agreement applies only to this one student and that the student is required to use one of the private changing areas.

Of the over 100 people who signed up to speak, only 39 were able to do so, and many of them were not residents of District 211. It has been reported that of those 39, 9 identified as “transgender.” Astonishing. While “transgenders” constitute .2-.3% of the population, they constituted almost 23% of the speakers.

So, how did our friendly neighborhood, science-denying “progressives” defend a policy that requires all students to pretend a boy is a girl? Here are just a few of their arguments:

The problem with this analogy is that blacks are not different from whites in any substantive way, whereas men are fundamentally and substantively different from women—a fact that even homosexuals tacitly acknowledge when they say they are attracted only to members of their same sex.

But, of course, recognizing and respecting that men and women are not identical is both proper and good. When the boy—and he is objectively a boy—at the center of the controversy demands to use the girls’ facilities, he is acknowledging sexual differentiation and the importance of privacy and modesty, which derive from physical embodiment (i.e., maleness or femaleness). He is at the same time denying the importance of privacy and modesty for the girls whose privacy he seeks to invade.

Claim 2. High school students have all seen opposite-sex genitalia, so one penis in the girls locker room is a non-issue.

This argument assumes that the reason society separates boys from girls for toileting, changing, and showering is that society has believed and still believes that neither boys nor girls have seen   opposite-sex genitalia.

That should be a self-evidently foolish argument since boys and girls grow up with opposite-sex siblings, cousins, and/or playmates whom they see in various states of undress.

But of course, anatomical ignorance is not the reason we have sex-segregated restrooms and locker rooms. We have them because maleness and femaleness per se have meaning. The parts of human anatomy that are involved in excretory or sexual activities are called “private” parts because they are supposed to be, well, private. The physical maturation that is taking place in adolescence only intensifies feelings of modesty and increases the importance of privacy.

Those on the Left who claim that a penis in the girl’s locker room is unimportant because girls have seen a penis fail to distinguish between seeing strangers of the opposite sex undressed online or in movies and seeing a particular person—a classmate—of the opposite sex undressed. And Leftists focus not at all on the violation being seen undressed by an opposite-sex student constitutes. Such a violation isn’t felt only by adolescent girls but by boys as well.

Culture can either cultivate or deracinate modesty. Allowing students to use opposite-sex restrooms and locker rooms undermines the inherent meaning of physical embodiment and the virtue of modesty. Furthermore, it teaches the radical and nonsensical notion that being partially clothed or unclothed in front of someone of the opposite sex is trivial as long as the person of the opposite sex dislikes his body.

Claim 3. Already in other schools in the district, gender-dysphoric students are using opposite-sex locker rooms, and no one cares.

First, many, probably most parents of students in District 211 had no idea that gender-dysphoric students were using opposite-sex restrooms and/or locker rooms until this controversy blew up in public, so they can’t complain about that which they had no knowledge.

Second, many students and parents are reluctant to express their opposition to students using opposite-sex restrooms and locker rooms out of fear of being labeled ignorant, hateful, or lacking in compassion. Heck, people are afraid to say that this boy is a boy for fear of being labeled hateful. This may explain why Superintendent Daniel Cates continually refers to the student as “she” and “her.” Surely Cates knows that pronouns denote objective sex—not desires about sex—and yet he speaks nonsense anyway.

Speaking of pronoun-use, in a remarkable display of presumptuousness and liberal hypocrisy, ACLU spokesman Ed Yohnka actually admonished the board for not instructing speakers to use opposite-sex pronouns when referring to the boy in question. He scolds others for not capitulating to his philosophical assumptions, which he believes should upend the English language.

Third, there are, indeed, some in the district who do care, including the District 211 girls who last night courageously expressed their opposition to allowing a boy in the locker room.

One girl said she speaks for the silent majority of girls who are uncomfortable with a boy in the locker room. She talked about the numerous times she’s had to change into a swimsuit and how uncomfortable it would be if a boy could enter the locker room while she’s changing. She described her feelings of vulnerability and said her feelings derive from neither irrational fear nor over-zealous religious belief. She believes that privacy and emotional security matter and that modesty should be protected by the school.

Another girl expressed that students who are directly affected by this decision have been ignored. She talked about the insecurity most girls feel about their changing bodies and about other psychological struggles they experience, implying that the presence of a boy in their locker rooms would add to their own struggles. She feels that this boy’s problems take precedence over the struggles of the girls whose privacy he seeks to invade. And she said that girls who feel like she does are now being bullied. She pleaded with the school board to take a stand for the majority of students and rightly predicted that if the district blurs this line now, one day there will be no lines left.

A third girl shared what she should never have been compelled to share in a room full of adults who should have had the courage and wisdom to fight relentlessly to protect girls’ privacy:  Restrooms and locker rooms are places where girls tend to and talk about feminine hygiene issues. Boys should not be present.

And finally, school policies should be based on principles—not on the desires or feelings of students. If schools established policy based on students’ feelings, there would be no dress codes. More students object to sharing a locker room with opposite-sex peers than object to short skirts, spaghetti straps, or t-shirts with pro-drug messages, all of which most schools ban.

One of the principles on which policies and practices have long been based is the principle—well, the fact—that males and females are fundamentally different and that the differences that matter with regard to areas in which students change clothes, shower, or engage in toileting activities are their anatomical/biological differences.

Adults are supposed to teach children, including teaching them the meaning of physical embodiment, modesty, and privacy. Policies and practices are two of the ways schools teach. Yes, sex-segregated restrooms and locker rooms help keep students safe but, like dress codes, they also teach.

Apparently, Cates and the feckless five school board members (aka the “sorry six”) who voted for the agreement with the tyrannical OCR believe it’s okay for teenage boys (and by extension I presume, men) to use girls’ locker rooms as long as these boys don’t like their male bodies. Perhaps the the sorry six, the OCR, and the ACLU can explain why it should matter to women if the man entering their restroom or locker room likes his body or not.

I feel confident in saying this (not eager to say it but confident): Most women do not want to do their business if in the stall next door an unrelated man is doing his. I suspect many men feel similarly. A divider provides insufficient privacy.

Leftists can wish all they want that humans were less modest, and they can do their devilish best to eradicate both modesty and the “gender binary,” but their destructive efforts will eventually lose because sexual differentiation and the attendant feelings of modesty are both intrinsic and good. Too bad so many people will be hurt by their foolhardy efforts—including the boy in District 211.

There was one last major argument proffered by supporters of the agreement. It was expressed by speakers and seen on a sign that read, “Trans Lives Matter,” which might make sense if anyone were claiming they don’t. What the sign meant was that the only way anyone can demonstrate that the lives of body-rejecting people matter is by affirming their feelings and pretending that gender dysphoric boys and girls are in reality the sex they wish they were.

But real acts of compassion depend first on knowing what is true. If rejecting one’s body is neither healthy nor good, and if the discordance between body and mind is in reality a mind problem rather than a body problem, then affirming gender dysphoria is the most pernicious of acts, no matter what their intent is.