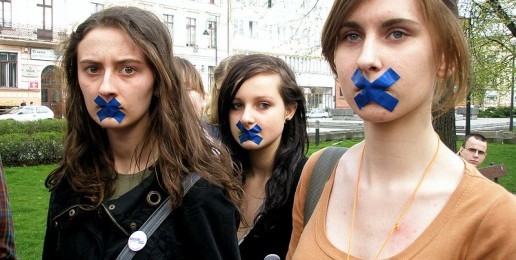 The Day of Silence is fast approaching. For the uninitiated, the Day of Silence (DOS) is yet another effort by the Gay, Lesbian and Straight Education Network (GLSEN) to use public education to transform the views of our nation’s children on the nature and morality of homosexuality.

In a concerted effort, numerous pro-family organizations are urging parents to call their children out of school on the Day of Silence (April 16, 2010) if their school is permitting students to remain silent during class.

DOS participants have a First Amendment Right to wear t-shirts or other DOS paraphernalia. They do not, however, have a right to refuse to speak in class. Parents should call their middle and high school administrators and ask one question: Are students permitted to refuse to speak in class on the DOS? If the answer is yes, or if it is evasive or unclear, call your child or children out of school on April 16.

Schools lose money for every student absence. We believe that if one group of students is silent and another group is absent — which costs schools money — school administrations will reconsider the wisdom of allowing social or political action to intrude into the classroom.

GLSEN, like many other homosexuality-affirming organizations and many professional education organizations, has been exploiting public education, anti-bullying sentiment, and anti-bullying resources in its subversive effort to impose GLSEN’s social, political, and moral beliefs on all of society.

The means by which GLSEN seeks to end bullying is by normalizing homosexuality through anti-bullying resources.

A combination of naïvete, ignorance, and cowardice has lead conservatives to acquiesce to the manipulative tactics of GLSEN and it compeers, like the Southern Poverty Law Center’s “Teaching Tolerance,” The Illinois Safe Schools Alliance, and the National Education Association, all of which are vigorously pursuing inroads into elementary, middle, and high schools as well as schools of education, which teach future teachers.

To get a better sense of the big and ever-darkening public school picture, here are just some of the homosexuality-affirming educational highlights from 2008-2009:

It’s an unconscionable fact that in those communities where opposition to pro-homosexual resources has arisen, it’s almost always one person or a very small group who are willing to endure public hostility for the sake of children and the cause of truth. Participating in the Day of Silence Walkout is one of the few relatively easy efforts that conservative parents have available to them to express their opposition to the use of public funds and school time to normalize homosexuality.

One word of warning: Parents should not ask if their school is sponsoring, endorsing, or promoting the DOS because technically the DOS is sponsored and promoted by students. School administrators have been known to tell parents that their school is not sponsoring, endorsing, or promoting the DOS, when the administrators knew full well that teachers were allowing students to remain silent during class. These administrators were misrepresenting to parents what would take place on the DOS, while remaining technically truthful.

Conservative parents have remained largely and irresponsibly silent in the face of steadily increasing pro-homosexual activism in public schools. This activism, almost always ushered in through anti-bullying programs, has now reached elementary schools.

Pro-homosexual activist-“educators” will not listen to reason; they do not honor all voices; and they do not respect either intellectual diversity or parental rights. Administrators and school board members may, however, respond to the loss of funds.

Please, find out if your school is permitting student silence during class on the Day of Silence, and if so, call your children out. Send a message to your school that if they are going to allow social and political action in class, your child will not be there.

For more information, including a sample “calling out” letter and answers to common questions about the Walkout, click HERE.