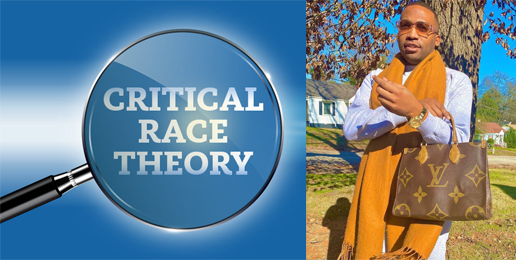 Project Veritas has just released another exposé in which a profiteering propagandist who self-identifies as an “educator” admits that he promotes critical race theory (CRT) to and in public schools by omitting the words “critical race theory.” Yes, Americans really are that gullible.

The racist scamster is Quintin Bostic, a homosexual who works for the Washington D.C.-based Teaching Lab that—according to Bostic—sells CRT-based curricula to school districts, including districts in the state of Georgia, where state law prohibits the teaching of “divisive concepts” related to race, most notably CRT.

In order to circumvent that law, Bostic gleefully admits to omitting the words “critical race theory.” To leftists hell-bent on socially imposing their moral beliefs and socially constructing their new world order, transparency is the enemy.

If you don’t say the words “critical race theory,” you can technically teach it.

He then lightheartedly describes his work ethic:

I would say I’m a good salesman, but I’m also an evil salesman—like so bad.

He further admits that the good people of Georgia are paying for the curriculum his organization sells in violation of state law:

Project Veritas: “So, the state is paying for your curriculum without knowing what’s in it.”

Bostic: “They have no clue. And I’m like, “This is great—this is good!”

Project Veritas asks Bostic how he conceals the fact that the curriculum he sells is based on CRT, to which Bostic replies, “It’s a DEI work.”

Many will recall how leftists mocked conservatives relentlessly in the past few years for claiming CRT was being taught in public schools. As I wrote earlier, these deceitful or ignorant leftists were technically accurate. Public schools were likely not teaching CRT as an academic theory to middle school or high school students. Rather, they were teaching arguable ideas derived from CRT as objective truths and masking the arguable ideas under the Diversity, Equity, and Inclusion (DEI) rubric—an ever-present help to leftists in trouble.

The arrogant Bostic shared that his CRT-polluted curriculum is being taught in at least one kindergarten and that he couldn’t care less if Georgia parents are upset about the illegal use of CRT-based curriculum in their schools.

Like so many leftist activists, Bostic dismisses parents as their children’s teachers:

I hate to say it, but parents are like not teachers.

To emphasize his point, he says parents “are” ignorant.

I don’t at all hate saying this: Bostic is “like” not a teacher. He is a propagandist.

Bostic makes clear that he shares the widely held leftist goal of undermining children’s relationships with their own parents:

And these kids are also pushing against their parents, like, “Mom, that’s not right! You shouldn’t say that!”

Nothing sends a thrill up the legs of leftist “educators” quite like turning other people’s children into activists for leftist causes.

Bostic has other troubling goals not exposed in Project Veritas’ video but available in this interview:

I grew up in a real small town. Um, I was a minority as far as race and sexual orientation. … I also had no one to relate to and to connect with and talk to and to share those same like backgrounds and understanding. And so like with me and my identities, that moment let me realize like [teaching is] more than just opening the book and reading and teaching the standard. It’s you being here in this space and like being present, because as a teacher … you’re that everything for that child eight hours a day 40 hours a week. You are that person for a child who gives them comfort, who gives them love, who gives them passion, who gives them knowledge, who gives them guidance, and you cannot put a price and you cannot put words on that.

Take a moment to absorb Bostic’s claim: He says teachers are “everything” for children “eight hours a day, 40 hours a week.” Many leftists understand the profound affect teachers have on the minds and hearts of children and are exploiting their roles to destroy children.

For parents who believe—rightly—that homoerotic acts are dishonorable acts that put at risk the eternal lives of those who engage in them, the goals of Bostic are evil. No one and no organization that receives funding from the government has a right to promote controversial moral beliefs about sexuality to children.

No matter how many parents object to their children’s public school education being infused with controversial ideas derived from CRT and no matter how strenuously they express their objections, leftists will not stop using taxpayer money to promote those ideas. Increasingly leftists openly admit they seek to indoctrinate other people’s children with leftist views of race (and sexuality) even if doing so disrupts parent-child relationships. They justify their subversive actions as necessary to promote their disordered understanding of what is right, true, and beautiful. And the goal of leftists to indoctrinate children in their leftist ideologies relies on lack of transparency.