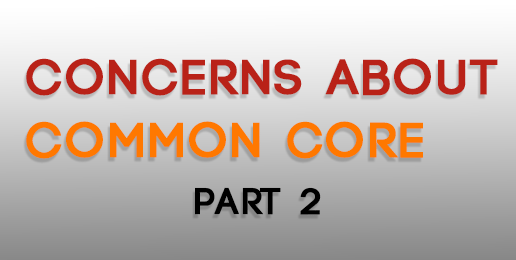 Yesterday in the Chicago Tribune, Bob Secter writing ostensibly in support of Common Core Standards (CCS) engaged in the very kind of hyperbolic mischaracterization of critics of CCS for which he condescendingly mocks them. He spends the first quarter of his opinion piece comparing CCS critics to Joseph McCarthy, and then he spends the rest of his time mocking CCS critics based on one flawed story on FOX News. He wraps up his piece of demagoguery—as opposed to reasoned analysis—by returning to his dishonest and paranoid McCarthy analogy. This was not a sound analysis of CCS. It was a hit piece on FOX News masquerading as an analysis of CCS. Not once did Secter respond to the substantive criticisms proffered by reasonable experts on the left and right, some of which are outlined here.

As I wrote in Part 1, opposition to the effort to nationalize public education known as Common Core Standards (CCS) is growing. And we’re witnessing a rare political event: opposition is coming from both the political right and left.  Part 2 outlines some of the problems that are likely to accompany the adoption of  CCS.

Stanford University professor James Milgram, the only mathematician on the (CCS) validation panel, concluded that the Common Core math scheme would place students two years behind their peers in other high-achieving countries. In protest, Milgram refused to sign off on the standards. He’s not alone.

Professor Jonathan Goodman of New York University found that the Common Core math standards imposed “significantly lower expectations with respect to algebra and geometry than the published standards of other countries.”

The constitutional authority for education rests with states and localities, and ultimately with parents—not the federal government. The federal government has crossed this line in the past, but dictating curriculum content is a major new breach that represents a critical level of centralization and a major setback for parental rights.

Unfortunately, we feel that not only did this year’s New York State Exams take an extreme toll on our teachers, families and most importantly, our students, they also fell short of the aspirations of these Standards.

…As it stands, we are concerned about the limiting and unbalanced structure of the test, the timing, format and length of the daily test sessions, and the efficacy of Pearson in this work.

[T]he testing sessions….were unnecessarily long, requiring more stamina for a 10-year-old special education student than of a high school student taking an SAT exam. Yet, for some sections of the exams, the time was insufficient for the length of the test. When groups of parents, teachers and principals recently shared students’ experiences in their schools, especially during the ELA exams with misjudged timing expectations, we learned that frustration, despondency, and even crying were common reactions among students.

Finally, we are concerned about putting the fate of so many in the education community in the hands of Pearson – a company with a history of mistakes. (…Pearson has a 3-year DOE contract for this test alone, worth $5.5 million.) There are many other examples of Pearson’s questionable reliability in the area of test design….Parents and taxpayers have anecdotal information, but are unable to debate the efficacy of these exams when they are held highly secured and not released for more general analysis. These exams determine student promotion. They determine which schools individual students can apply to for middle and high school. They are a basis on which the state and city will publicly and privately evaluate teachers. The exams determine whether a school might fall under closer scrutiny after a poor grade on the test-linked state and city progress reports or even risk being shut down.

Both the 2009 Stimulus bill and the Race to the Top program required states to build massive student databases. It is recommended that these databases ultimately track over 400 data points, including health-care history, disciplinary history, etc. Any of this data that will be given to the Smarter Balanced consortium as part of the national test will be sent to the U.S. Department of Education. USED can then share the data with literally any entity it wants to—public or private—because of regulations it has issued gutting federal student-privacy law.

In the past few years, the privacy protections built into federal law have been weakened by the U.S. Department of Education to allow third-parties to access confidential information about students.

In December 2011, the U.S. Department of Education changed the regulations governing the release of student data to the private sector, without Congressional authorization to do so. At that time, “the ED issued final regulations implementing its proposed amendments, despite the agency’s admission that “numerous commenters…stated that they believe the Department lacks the statutory authority to promulgate the proposed regulations contained in the NPRM.”…

This is the background for inBloom, the massive database of confidential student information funded by the Gates Foundation with $100 million, assembled by a subsidiary of Rupert Murdoch’s News Corporation, stored on a “cloud” by amazon.com.

A Reuters report exposes who benefits from this indefensible violation of parental rights and student privacy:

[T]he most influential new product [at an educational technology conference] may be…a $100 million database built to chart the academic paths of public school students from kindergarten through high school….

Local education officials retain legal control over their students’ information. But federal law allows them to share files in their portion of the database with private companies selling educational products and services.

The database is a joint project of the Bill & Melinda Gates Foundation, which provided most of the funding, the Carnegie Corporation of New York and school officials from several states. Amplify Education, a division of Rupert Murdoch’s News Corp built the infrastructure over the past 18 months. When it was ready, the Gates Foundation turned the database over to a newly created nonprofit, inBloom Inc, which will run it.

States and school districts can choose whether they want to input their student records into the system; the service is free for now, though inBloom officials say they will likely start to charge fees in 2015. So far, seven states – Colorado, Delaware, Georgia, Illinois, Kentucky, North Carolina, and Massachusetts – have committed to enter data from select school districts. Louisiana and New York will be entering nearly all student records statewide.

Federal officials say the database project complies with privacy laws. Schools do not need parental consent to share student records with any “school official” who has a “legitimate educational interest,” according to the Department of Education. The department defines “school official” to include private companies hired by the school, so long as they use the data only for the purposes spelled out in their contracts.

No matter what the good intentions of the Gates’ or other cultural movers and shakers are, this is tantamount to an end run around the limits placed on the federal government’s ravenous appetite for power and the people’s money. The critical ends of improving low-performing schools do not justify the means of nationalizing public education and robbing high-performing schools of their freedom to control their standards and corresponding curricula and assessments. Moreover, there is no research-based evidence proving that the expensive implementation of Common Core Standards will even achieve the goal of improving low-performing schools.

The left exploits the human tendency to focus on the immediate. It takes time and effort to think through the logical outworking of ideas and the likely  systemic changes that will follow the implementation of ideas like the adoption of CCS.  Dazzle Americans with shiny gewgaws dangled right in front of them, blinding them to the cliff a mile ahead. And just for good measure, slap a dollop of ridicule on critics to keep anyone from listening to them.

The truth is that the United States cannot afford yet another huge expansion of the parasitic, bloated federal behemoth that feeds on Americans.

Do you have friends or acquaintances who could benefit from IFI’s informational emails? If you do, please forward this IFI email to them and encourage them to subscribe our e-mail list!