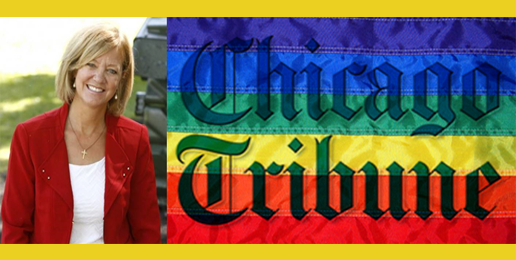 I thought my view of the Chicago Tribune couldn’t get lower and then I read a piece by Mr. Kim Janssen on State Representative Jeanne Ives (R-Wheaton), one of the most courageous, ethical lawmakers in Springfield.

Last week, Rep. Ives posted a link to my article titled “Christians Must Exit Government Schools” on her Facebook page. Subsequently, Janssen wrote an article titled “Lawmaker compares teachers who support transgender rights to ‘dirty old men,’” ostensibly about Rep. Ives, which was published online Friday night. As I predicted, the Trib waited to publish it in their Sunday print edition rather than publishing it in the slim and little-read Saturday edition. It seems that the Trib powers-that-be want to use my politically incorrect writing to do as much political damage to Rep. Ives as possible.

Further clarification: Gender-dysphoric persons have no ethical or moral “right” to use opposite sex restrooms and locker rooms. In an email to Rep. Ives after his article was published, Janssen doubled-down on the absurd claim that objectively male and objectively female persons have a “right” to access opposite-sex private spaces, accusing Rep. Ives of having a “history of opposition to transgender rights.” Janssen’s assertion reveals his ideological bias.

“Trans”-identifying persons have no more ethical “right” to use opposite-sex facilities than do I or Mr. Janssen. The current manifestation of the sexual revolution is not a fight for equal rights or a fight to gain rights that have been denied to some group. Artificially feminized men and artificially virilized women are declaring that they deserve special, a-historical privileges. They have decided that while all other humans must use private spaces that correspond to their objective, immutable biological sex, they—that is, “trans”-identifying persons—may use private spaces that do not correspond to their objective, immutable biological sex. They are demanding to be treated differently from most humans.

Perhaps a better way to define what gender-pretenders are doing is to say they have arrogated the unilateral authority to declare that all spaces in which humans undress or engage in bodily functions will no longer correspond to objective, immutable sex but, rather, will correspond to subjective, internal feelings about one’s sex. “Trans”-identifying persons, however, have no authority or right to decide that feelings trump objective sex when it comes to accessing private spaces.

In his “news” article about Rep. Ives—really an article about my article—Janssen cites the ethically impoverished Southern Poverty Law Center (SPLC), which labels IFI a “hate group” based on our views of volitional homoerotic activity, marriage, and the “trans” ideology, views with which the SPLC disagrees. The only way IFI, which holds orthodox theological views, can be deemed a “hate group” is by redefining hatred.

Rational, fair-minded people understand that holding moral views about volitional behavior with which “progressives” disagree does not constitute hatred of persons. Perhaps “progressives” hate those who hold moral positions with which they disagree, but they ought not project their habits of mind onto others. Most people in this wildly diverse world are able to love those who hold moral views with which they disagree and who act in accordance with those views. Most of us do it every day.

Curiously, Janssen characterized Rep. Ives as “far to the right” but did not characterize the SPLC as far to the left. It was also curious that when citing the SPLC’s labeling of IFI as a “hate group,” he didn’t offer even a brief mention of the fact that the SPLC continues to come under fire for its promiscuous and unjustifiable labeling of Christian groups as “hate groups” merely for holding theologically orthodox views of homosexuality.

Janssen also reported that Rep. Ives has in the past characterized homoerotic unions as “disordered.” True enough, but Janssen did not mention that this language comes from the Catholic Church which states that “homosexual acts are intrinsically disordered.” Even the Left’s beloved Pope Francis embraces that view. I’m sure Janssen can fact-check that with some of his purportedly Catholic colleagues like editor-in-chief Bruce Dold.

What I can’t figure out is how former President Barack Obama escaped the charge of “hater” from the SPLC prior to his 2012 “evolution” on marriage.

Here is the most provocative part from one of my sentences that Janssen cited without context in which I compare teachers who expose students to obscene material to dirty old men: “like dirty old men in trench coats lying in wait to expose children to sordid things.”

Perhaps this simile would sound just a tad less outrageous to darkened minds if Janssen had either included my quote about exposing students to obscene material or called me for clarification in which case I would have shared some piquant quotes from Angels in America which was taught at both Deerfield High School and Highland Park High School when I worked for District 113.

For those who are unaware, Angels in America: A Gay Fantasia on National Themes is a Pulitzer-prize-winning play by homosexual playwright Tony Kushner.  The plot revolves around two couples: married Mormon couple Harper (the wife) and Joe whose marriage is disintegrating in large measure due to Joe’s repressed homosexuality, which he eventually acts upon; and a homosexual couple, Louis and Prior.

Louis leaves Prior when he finds out Prior has AIDS and has a month-long affair with Harper’s husband Joe. Roy Cohn—the infamous, unscrupulous, foul-mouthed, closeted, Republican lawyer—is also a central character who dies of AIDS.

Then there is the black, homosexual, drag queen nurse with the heart of gold, Belize, and the Angel with “eight vaginae” whose visits prompt sexual arousal and orgasm.

Heaven is a dreary place that looks like San Francisco after the 1906 earthquake with people sitting around on crates playing cards. The angels say that God has abandoned man. Angels in America concludes with an emotional speech to the audience about all the homosexuals who have been lost to AIDS who “will be commemorated.”

So, here are some excerpts:

Louis: I don’t believe in God. I think you should know that before we fuck again (Joe bites one of Louis’s nipples.)…. Oh God, Oh God, I believe, I believe. (Joe and Louis begin to fuck again.)

Louis: I’m losing myself in some ideological leather bar. The more appalling I find your politics the more I want to hump you. Bunker fucking; burn me up; may I never ever reemerge…. (They start to fuck.)

Prior: Wait. Wait. How come… How come I have this… unm, erection? It’s very hard to concentrate.

Angel: The stiffening of your penis is of no consequence. (…They both get very turned-on)

Prior: (Hit by a wave of intense sexual feeling): Hmmmmmm…

Angel: The Pulse, the Pull, the Throb, the Ooze…

Prior: She fucked me. She has… well, she has eight vaginas.

If Janssen had contacted me, I could have provided these quotes for him to use in his article, so readers would better understand my simile. Oh, wait, he wouldn’t be permitted to publish this material—material to which public school teachers expose other people’s children.

While Janssen managed to include comments from ACLU spokesman Ed Yohnka and a Batavia teacher about my words, he didn’t even try to solicit a comment from me.

This play (and other texts taught or recommended in public schools) is obscene, profane, and sordid. Fifty years ago, a teacher would have been fired for exposing students to this in any public high school. Hence my comparison of teachers who would expose students to these words to debauched men who expose children to sordid things. The only difference is unlike men in dark alleyways, today’s “progressive” teachers are not only unashamed of their actions, they’re proud of them.

I find it ironic that just last Monday I submitted an op-ed to the Trib on the “trans” ideology (to be published here later this week), which was rejected. So, while the Trib found my words sufficiently newsworthy to selectively quote (and erroneously attribute) in a “news” article, it found my contextualized words unworthy of publishing on the editorial page.

From Scott Murray: “Folks in her district are just like her. She is a reflection of the monstrosity known as Wheaton, IL…Please, “christians”, especially you phony Ives, get the fuck out of public everything. Take your small, feeble minds, your hypocrisy, intolerance and ignorance, shove ’em all up your asses sideways, and die slow, agonisingly paiful deaths. Faker fuckheads, the lot of you…”

From Bruce Spielbauer: “Rep. Jeanne Ives — I would encourage you to step down, and then take your bigoted, anti-Christian agenda on, as a private matter. The Westboro Baptist Church would welcome you. The United States of America — um, not so much. You are so misguided, and are so clearly on the wrong side of science, and biology, and history. Do your constituents a favor, and do the citizens of this nation a favor. Resign. For the good of humanity.”

And this from John Hammond to the accomplished public servant, Army veteran, West Point grad, and former ROTC instructor Jeanne Ives: “Oh lil darlin’… do us all a favor and stay in the kitchen barefoot and pregnant… it’s frightening that people like you represent us in the legislature. Frightening, actually.”

There you have it—the honeyed voices of tolerance from tenacious “progressive” opponents of chauvinism and sex-segregated locker rooms.

More ACTION: Pray for Rep. Ives. Then please click HERE to send her an email of support and encouragement. If you are able, please post supportive messages on her Facebook page and via Twitter.

IFI works diligently to serve the Christian community in Illinois with email alerts, video reports, pastors’ breakfasts, special forums, worldview conferences and cultural commentaries. This work is dependent solely on the support of readers like you.

If you appreciate the work and ministry of IFI, please consider a tax-deductible donation to sustain our endeavors.