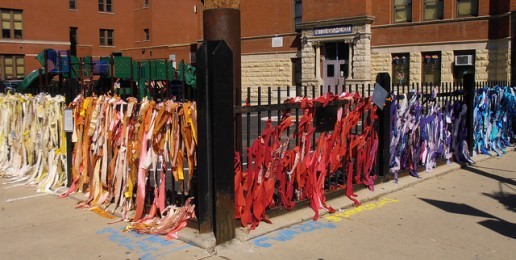 I am so angry I could scream — but instead I’ll write.

Nettelhorst Elementary School, a public school located in the Lakeview neighborhood of Chicago, has the dubious honor of being the first Chicago public school to march in Chicago’s “gay pride” parade on Sunday.

According to an article in the Windy City Times, and not surprisingly, “Brad Rossi, a gay parent of a first-grade girl, and Marcia Festen, a lesbian parent of two daughters, one of whom is in kindergarten, were both crucial in bringing the idea to the school. The two worked together in the 1980s, and Rossi says that the idea came from California.”

I have asked before and I will ask again, how depraved does the behavior have to become to which our public schools expose children and how young do the children have to be before conservatives and faith communities rise up in righteous indignation?

According to the Chicago Tribune, “The black metal fence in front of Nettelhorst Elementary School is obscured by thousands of strips of dyed fabric-yellows giving way to greens, then blues, purples and reds-each one tied on by the small hands of a student.” How special.

I called the school to ask if the small children had tied the thousands of strips on the fence during school time, but the teacher who answered the phone claimed she didn’t know.

I was struck by the symbolism inherent in these decorations: The rainbow colors representing the GLBT movement and goals now completely obscure public education.

The National Education Association (NEA), the Gay, Lesbian and Straight Education Network (GLSEN), and pro-homosexual proselytes employed in public schools conspire to use public education to eradicate the belief that volitional homosexual acts are immoral. Public education is transmogrifying into public indoctrination right before our very eyes. The evidence is proudly displayed in thousands of rainbow-colored flags tied by little hands.

Have Nettlehorst administrators and teachers read, studied, and thought deeply about the nature and morality of homosexuality? Have they studied what some of the greatest theologians, historians, and philosophers throughout history have written about it? Have they read the best contemporary scholarship on the subject from both liberal and conservative thinkers? What astonishing hubris, foolishness, and irresponsibility this parade decision represents.

Conservatives must wake up. To use a cliche, we must see the forest for the trees. Cultural change rarely occurs through dramatic single events, but rather through the slow accretion of little events that we dismiss or ignore.