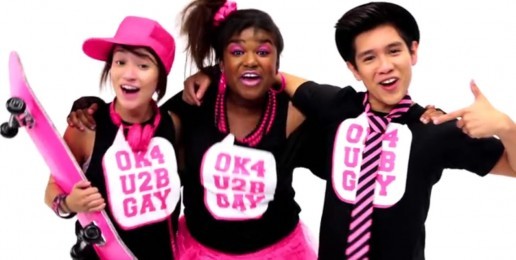 Perhaps some remember the loathsome and vulgar campaign that has young children using the F-word in a video series to promote affirmation of homosexuality. Well, they have a new campaign and the creator, Luke Montgomery, sent IFI an email about it, saying, “Hello, I thought you might find this of interest…”

Below is the press release he thought would interest us and which provides another reason to call your kids out of school on the Day of Silence. The more cowardly we are, the more brazen homosexual activists become in their efforts to promote acceptance — not tolerance — but acceptance of homosexuality via government-subsidized public schools:

San Francisco – March 14, 2012 – H8SUX.com, a gay activist and T-shirt website, launched today and released its first viral video campaign targeting school kids with an offer of a free “OK4U2BGAY” T-shirt. The free pro-gay shirt will be shipped to any teen who simply makes a special YouTube video pledge to speak out against homophobia at school and support gay marriage. Inspired by the hit show “Glee,” the organization released a slickly-produced musical commercial showcasing a same-sex teen kiss and kids dancing in front of hot-pink school lockers while singing a catchy pro-gay song.

Organizers say the teen-targeted campaign is in response to who they call, “ballot box bullies” – politicians who directly inspire a climate for schoolyard bullies to torment LGBT kids. They cite initiatives to ban gay marriage in North Carolina and Minnesota, “Don’t Say Gay” Bills in Utah and Tennessee, and Rick Santorum’s promise to “force-divorce” thousands of legally married gay and lesbian couples as motivation for their pro-gay message to kids.

“We are recruiting kids to the cause of promoting the acceptance of homosexuality in schools,” said Luke Montgomery, director of the H8SUX.com video. “In a world full of bullies, suicide and hate, thousands of school kids wearing a pro-gay message in classrooms can be lifesaving and great. Kids are born gay, lesbian, bi and trans – and when I came out at 15, I was brutally beaten and left unconscious and bloody in a ditch. In 2012, kids should not be bullied and attacked just for being who they are. This free T-shirt will be a pro-gay billboard plastered on the chests of thousands of kids in classrooms across the nation. Our agenda is simple: to tell kids that it’s “OK4U2BGAY.” H8SUX.com is all about giving kids, gay and straight, the power to speak out against hate – and get a cool free T-shirt while doing it. Everyone says ‘it gets better’ – this makes it better.”

Featuring T-shirts with slogans such as “Legalize Love” and “Bullies Suck,” the H8SUX.com website is also making an appeal to adults using a model like the successful “One for One” charitable efforts of the TOMS shoe company. For every hoodie, tank to or tee sold on H8SUX.com, the organization will give a teen an “OK4U2BGAY” tee for free.

Video Sound Byte: “It’s OK to be gay. It’s great if you’re straight. But I ain’t down with this homo-hate!”

The company will be holding frequent T-shirt and wristband giveaways via Facebook and Twitter to grow the online           movement of teens and to promote acceptance of homosexuality in classrooms across the nation. (emphasis added)

I will shortly post my email response to Mr. Montgomery.

Make sure your Illinois friends & neighbors see the IFI Voter Guide
before they go to the polls on Tuesday!